Benjamin Franklin – Instrumental in laying the government’s foundation when the United States was first established, Franklin was also known for his work as a writer, inventor, philosopher, and scientist. Today, Franklin is said to haunt the Philosophical Society’s library in Philadelphia, Pennsylvania. Some people have even reported that the Philosophical Society’s statue of Franklin has been seen dancing along the streets.

Clark Gable – One of the biggest box office stars during the 1930s and ‘40’s, both Clark Gable and his wife, Carole Lombard are said to haunt the Oatman Hotel in Oatman, Arizona. After they married, in Kingman, they spent their honeymoon at the Oatman Hotel. 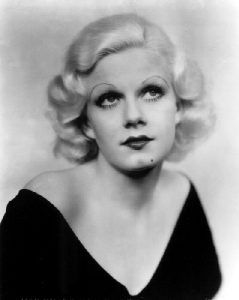 Jean Harlow – The phrase “blonde bombshell” was coined for Jean Harlow during her short career in Hollywood. In 1932, she married MGM studio executive Paul Bern who was said to have beaten her viciously. Bern killed committed suicide the same year in their upstairs bedroom. After appearing in three dozen films between 1927 and 1937, her career was cut short when she died at the age of 26 of kidney failure. Though the kidney failure is partially attributed to a childhood illness, some say it was made worse by the frequent beatings she suffered at the hands of Bern. Both Harlow and Bern have been seen numerous times in the mansion they once called home.

Harry Houdini – Though Houdini didn’t believe in spiritualism, his ghost is said to haunt a couple of locations. At Jacki Gaughan’s Plaza Hotel in Las Vegas, a magic show held here is a tribute to Houdini’s talents as an escape artist and magician. Staff believes the showroom is haunted by a ghost who likes to play pranks and move items around. Many of these same people think the ghost is none other than Houdini himself, perhaps lingering to ensure they are “doing it right.” The most common place that Houdini has been sighted is the property where his mansion once stood in Laurel Canyon. Though destroyed by fire in 1959, many people have allegedly seen his apparition lurking about the old property.

Thomas Ince – considered one of the visionary pioneers of American movies, Ince was one of the most respected directors of the silent film era. He was a co-founder of Culver Studios which would later become MGM. In 1924 he died of heart failure but apparently remains at the lot that was once Culver Studios.

Andrew Jackson – Jackson was the seventh President of the United States, serving from 1829 to 1837. After his death, he was heard stomping and swearing in the Rose Room of the White House by none other than Mary Todd Lincoln. 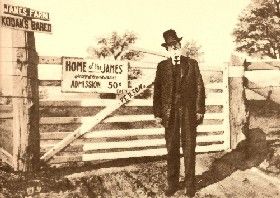 Frank James “merchandised” his past right up until the time he died. Here, he stands at the age of 70 before the gate of the Jesse James Farm, where curious spectators could pay 50¢ to see the farm and for just a little more money, could even buy pebbles from Jesse’s grave.

Jesse James – Jesse James was originally buried at the family farm in Kearney, Missouri, however, his body was later moved to the Mount Olivet Cemetery in town to be buried next to his wife. Though his remains are no longer at the farm, many believe he has never left. All kinds of strange events continually occur at the farm such as doors that slam closed by themselves, lights that move both inside and outside of the property buildings, and an overwhelming sense that an unearthly presence lingers. Others report hearing the sounds of pounding hooves, muffled shots, and cries that are reminiscent of the area history, dating back to events of the Civil War. More …

Thomas Jefferson – The third President of the United States, from 1801 to 1809 was known to retire to the Oval Office on numerous occasions to relax and play the violin. Over the years, there have been numerous reports of the sounds of those ghostly strings coming from the Oval Office.

Thomas “Black Jack” Ketchum – Black Jack was the only train robber ever hanged for this crime in the State of New Mexico. Known to be a charming man, he was also a renowned road agent, making off with loot from the steam engines of the day. Today, this Old West outlaw is said to haunt one of his favorite hideout caves near Folsom, New Mexico. More ...

Robert E. Lee – Confederate General in the Civil War, Lee led a number of successful battles before his surrender at the Appomattox Court House in April of 1865.  Today, his spirit has regressed back to a four-year-old child where he has been spied playing in the yard of his childhood home in Alexandria, Virginia. Said to be an impish spirit, he is known to play pranks like ringing the doorbell and moving objects within the house. His giggles are often heard throughout the house. Sometimes he is seen with a ghostly black dog and the spirits of two young girls, who are thought to be his sisters.

John Lennon – This former Beatle is said to haunt The Dakota building at 1 West 72nd Street in New York City, where he was shot to death.

Liberace – Known for his incredible piano playing skills, along with his charisma and diamonds, Liberace died of AIDs in 1987. According to numerous reports, the entertainer’s spirit has taken up residence at a restaurant called Carluccio’s Tivoli Gardens. Liberace once owned the restaurant located just a few blocks off the Las Vegas Strip. Next to the dining room, Liberace had his own private lounge where he entertained close friends. From here, he was known to sometimes slip into the main dining room to tinkle the keys of the piano to the delight of unsuspecting diners. Today, staff and guests alike believe that the flamboyant pianist has never left, as there are numerous reports of electrical surges, bottles that tip over for no reason, and ladies’ restroom stalls that lock and unlock themselves. On one occasion the electricity went off and would not come back on until someone realized it was Liberace’s birthday. After they wished him a happy one, the lights inexplicably came back on. Some report seeing his spirit outside the windows.

Abraham Lincoln – The most often spied spirit of all of our American Presidents, Lincoln was know to be a believer in the supernatural. President Lincoln is known to haunt not only the White House but also several sites in Springfield, Illinois where his political career began. Famous occupants of the White House, including President Theodore Roosevelt and First Lady Grace Coolidge, reported seeing a tall, gaunt figure in several rooms of the residence. Others who have been walking by the White House have reported seeing a shadow of Lincoln’s dimensions in the window of the Oval Office where the president often stood gazing at the Potomac River during the days of the Civil War. In Springfield, Illinois, Lincoln’s spirit is most often linked his tomb at Oakridge Cemetery. Over the years, a number of stories have been told by tourists and staff members of experiencing uncomfortable feelings and hearing phantom footsteps, whispers, muffled voices, and weeping. Lincoln has also been reported to have been seen walking the streets surrounding Springfield’s original courthouse, as well as the hallways of his former home. Others have reported seeing the ghost of Mary Lincoln at their old home located at 413 South Eighth Street.