The next morning, the colonists boarded four little vessels and sailed away for Georgia. On the afternoon of February 12th, 1733, they landed at the high bluff on the Savannah River. By sunset, they had spread under the tall pine trees four big, white tents; and in these, the whole colony, 120 souls—men, women, and children—were stored away “as snug as a bug in a rug.” Thus they spent their first night on Georgia soil. Oglethorpe occupied by himself a little tent pitched under a group of three tall pine trees.

Early the next morning, the colonists were assembled in front of Oglethorpe’s tent for prayers, which were conducted by the Chaplain, Reverend Henry Herbert. After prayers, Oglethorpe gave them a kind, fatherly talk and some good advice; and then they went about their work, the men unloading the boats and the women putting their household goods in order.

About eleven o’clock, while they were busy about their tasks, they were startled by hearing in the distance strange shouting of voices and the beating of some instrument like a drum. Looking in the direction of the sound, they saw far away through the level pine forest a band of Indians approaching them. The people were much frightened and began gathering around Oglethorpe’s tent, the men with guns in their hands; but, he soon calmed their fears, for he knew that it was only old Tomo-chi-chi and his followers coming to fulfill his promise, “As soon as your people get settled, we will come to welcome them.” 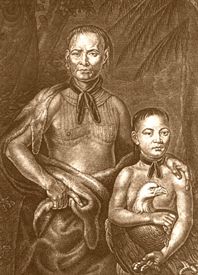 In front of the band of visitors marched the Yamacraw priest, or “medicine man” as the Indians call him. He was dressed in gaudy and grotesque style; his face and the upper part of his body were painted red, blue, yellow, and black; on the top of his head were the antlers of a young stag, and over his shoulders was thrown the skin of a fawn. In each hand he carried an outspread fan of eagle’s feathers attached to a long handle which was strung from top to bottom with little jingling bells. As he approached, he cut all sorts of queer but graceful antics, now crouching low down to the ground, then straightening up to his full height, and every now and then leaping high into the air, all the time jingling his bells and keeping up a mighty jabber in the Indian language, while those marching behind him uttered a strange grunting sound, “Ugh, ugh!”

As the procession drew near, Oglethorpe stepped a few paces in front of his tent to meet them. Suddenly they all stopped still except the “medicine man,” who advanced, walked slowly, with a stately stride, around Oglethorpe, and, stroking him from head to foot with the outspread fans, said, or rather chanted, over and over again in the Indian language, “May there be eternal peace between your people and our people!” After this ceremony was over, old Tomo-chi-chi, taking a buffalo robe from one of his attendants, stepped forward and said to Oglethorpe:

“We have come to welcome you as I promised. I have brought you a present. This is the skin of a buffalo, which is the strongest of all beasts; in the inside you see painted the head and feathers of an eagle, which is the swiftest and farthest flying of all birds. So the English are the strongest of all people, and nothing can withstand them; and they have a swift and far flight like the eagle, seeing that they have flown hither from the uttermost parts of the earth, over the vast seas. The eagle’s feathers are soft and signify love; the buffalo’s robe is warm and signifies protection; therefore love and protect our little families.”

As he made the speech, Mary Musgrove stood by his side and interpreted what he said, sentence by sentence. Oglethorpe was deeply touched. He made a kind, noble speech in reply, while the colonists—men, women, and children—stood behind him looking on in wonder at this strange, impressive scene.

Oglethorpe invited his visitors to stay for dinner, and they readily accepted. The women of the colony bestirred themselves mightily to get up a “company dinner” for their distinguished and unexpected guests, and they managed to prepare a fine repast. By two o’clock it was ready. In the meantime, the men had no difficulty in entertaining the Indians by showing them the many wonderful things they had brought from England. After dinner, as the guests were leaving, Oglethorpe made each of them a present: a scarlet shawl with a heavy fringe to Tomo-chi-chi; a blanket and a hatchet to each of the other men; and to each of the three women of the party, a string of beads and a looking glass. Then he bade them good-by and asked them to call again. Such was the first “state dining” ever given in Georgia.

For more than a year Oglethorpe continued to live in his little tent under the three great pine trees overlooking the river, while he directed the work of the colonists, all of whose hardships and privations he shared. He laid off in the great forest the plan of the town that was to be built there. That plan is perfectly preserved in the city of Savannah of today, though, of course, the original streets have been lengthened, and many new streets and squares have been added. Oglethorpe’s six streets—Bull, Bryan, Drayton, Abercorn, St. Julian, and Whitaker—are still the principal thoroughfares of the city. Bull street, he named for that Colonel William Bull who so greatly helped him in planting his colony; and the others he named for benevolent persons in England and South Carolina who had helped the colony by contributions in money and in other ways.

In the mighty work of clearing the forests, building homes, erecting forts, and cultivating gardens, the colonists were greatly aided during the first year by the generous South Carolinians, who furnished many laborers and mechanics free of charge. The Legislature of South Carolina also gave to them, a herd of 105 cows and a drove of 80 hogs, and private citizens of the same colony presented them with flocks of sheep and a number of horses.

From time to time new emigrants, sent over by the Trustees, arrived; so that by the end of the first year the colony numbered about 600 people, all under the fatherly care of James Oglethorpe.

Such is the story of the founding of the beautiful city of Savannah and the beginning of the great State of Georgia.

After the city was founded, Savannah became the colonial capital of the Province of Georgia and later the first capital of the state. After the American Revolution, the revolutionary state government made Savannah its capital. Today, Savannah, Georgia is the county seat of Chatham County and boasts a population of more than 142,000 people. It is Georgia’s fifth-largest city and attracts millions of visitors each year who enjoy the city’s architecture and historic buildings, its history, access to the coastal islands and the Savannah Riverfront, and visits to historic landmarks such as Fort Pulaski and the nearby Wormsloe Plantation. Tybee Island, formerly known as “Savannah Beach”, is the site of the Tybee Island Light Station, the first lighthouse on the southern Atlantic coast. Other picturesque towns adjacent to Savannah include the shrimping village of Thunderbolt and three residential areas that began as summer resort communities for Savannahians: Beaulieu, Vernonburg, and the Isle of Hope.

About the Article: This first part of this article was, for the most part, written by Joseph Harris Chappell and included in a chapter of his book, Georgia History Stories, published in 1905 by Silver, Burdett & Company. However, the original content has been heavily edited, truncated in parts, and additional information added.

The follow-up to Cappell’s story was compiled and written by Kathy Weiser-Alexander of Legends of America, updated May, 2017.

A Tour Along the Georgia Coast

Haunted Historic Sites in Savannah You Must Visit