The long causeway and bridge at Buck Head Creek was held while the division passed, by Colonel Heath and the Fifth Ohio, with two howitzers, and Wheeler received a severe check. The bridge was destroyed, and Kilpatrick took a strong position at Reynolds’s plantation. Wheeler then attacked in force, but, was decisively repulsed, and Kilpatrick effected his junction with the infantry without further molestation. Wheeler’s whole corps was engaged in this series of sharp skirmishes, and he boasted loudly that he had routed Kilpatrick, causing him to fly in confusion with a loss of nearly 200 in killed, wounded, and captured. Chafing at this rebuff, Kilpatrick obtained permission to deliver a return blow, and after resting his horses a day or two marched from Louisville on Waynesborough. He attacked Wheeler near the town and drove him by very spirited charges from three successive lines of barricades, chasing him through Waynesboro, and over Briar Creek. Wheeler admitted that it was with difficulty, he “succeeded in withdrawing ” from his position at the town, but, sought to take off the edge of his chagrin by reporting that he was attacked by the Fourteenth Corps, as well as by Kilpatrick’s cavalry.

Millen was reached on December 3rd and the direct railway communication between Savannah and Augusta was cut. Three corps now moved down the narrowing space between the Savannah and Ogeechee Rivers. From Millen onward the march of the whole army was a methodic progress with no noticeable opposition, for even Wheeler’s horsemen generally kept a respectful distance, and soon crossed to the left bank of the Savannah River. The country became more sandy, corn and grain grew scarcer, and all began to realize that they were approaching the low country bordering the sea, where but little breadstuffs or forage would be found. On December 9th and 10th, the columns closed in upon the defenses of Savannah.

Skillful infantry scouts were sent out to open communication with the fleet and to cut the Gulf Railway, thus severing the last connection of the city with the south.

During Sherman’s successful march, the destruction of railway communication between the Confederate Army at Richmond, Virginia and the Gulf States, had been a very important part of Sherman’s purpose, and he spared no pains to do this thoroughly. A battalion of mechanics was selected and furnished with tools for ripping the rails from the cross-ties and twisting them when heated, and these were kept constantly at work; but, the infantry on the march became expert in methods of their own, and the cavalry also joined in the work, though the almost constant skirmishing on the flanks and rear of the army usually kept the mounted troops otherwise employed. A division of infantry would be extended along the railway line about the length of its proper front. The men, stacking arms, would cluster along one side of the track, and at the word of command, lifting together, would raise the line of rail with the ties as high as their shoulders; then at another command they would let the whole drop, stepping back out of the way as it fell.

The heavy fall would shake loose many of the spikes and chairs, and seizing the loosened rails, the men, using them as levers, would quickly pry off the rest. The cross-ties would now be piled up like cob-houses, and with these and other fuel a brisk fire would be made; the rails were piled upon the fire, and in half an hour would be red hot in the middle. Seizing the rail now by the two ends, the soldiers would twist it about a tree, or interlace and twine the whole pile together in great iron knots, making them useless for anything but old iron, and most unmanageable and troublesome, even to convey away to a mill. In this way it was not difficult for a corps marching along the railway to destroy, in a day, ten or fifteen miles of track most completely; and General William T. Sherman himself gave close watch to the work, to see that it was not slighted. Then all machine-shops, stations, bridges, and culverts were destroyed, and the masonry blown up.

The extent of line destroyed was enormous. From the Etowah River through Atlanta southward to Lovejoy’s Station, for a hundred miles nothing was left of the road. From Fairburn through Atlanta eastward to Madison and the Oconee River, another hundred miles, the destruction was equally complete. From Gordon southeastwardly, the ruin of the Central road was continued to the very suburbs of Savannah, 160 miles. Then there were serious breaks in the branch road from Gordon northward through Milledgeville and in that connecting Augusta and Millen. So great a destruction would have been a long and serious interruption even at the North, but the blockade of Southern ports and the small facilities for manufacture in the Confederate States made the damage practically irreparable. The lines which were wrecked were the only ones which then connected the Gulf States with the Carolinas, and even if Sherman had not marched northward from Savannah the resources of the Confederacy would have been seriously crippled.

The forage of the country was also destroyed throughout a belt fifty or sixty miles in width. Both armies cooperated in this; the Confederate cavalry burning it that it might not fall into the hands of the National Army, and the latter leaving none that they could not themselves use, so that wagon transportation of military supplies across the belt might be made more difficult.

As the campaign progressed, great numbers of black men, women, and children attached themselves to the columns and accompanied the march. This was contrary to Sherman’s wishes, who felt the embarrassment of having thousands of mouths added to the number of those who must be fed from the country as he moved. Those who had less responsibility for the campaign did not trouble themselves so much with this consideration, and the men in the ranks generally encouraged the slaves to leave the plantations. The former slaves, themselves, found it hard to let slip the present opportunity of getting out of bondage, and their uneducated minds could not estimate the hope of freedom at the close of the war as having much weight against the instant liberty which was to be had by simply tramping away after the blue-coated soldiers. 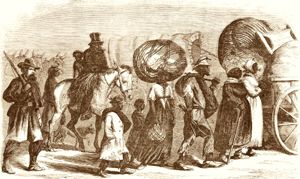 The natural result was that the regular temporary camps of the troops were fringed by numberless gypsy camps, where the black families, old and young, endured every privation, living upon the charity of the soldiers, helping themselves to what they could glean in the track of the army foragers. On the march, they trudged along, making no complaint, full of a simple faith that “Lincoln’s men” were leading them to abodes of ease and plenty.

When the lower and less fruitful lands were reached, the embarrassment and military annoyance increased.

Losing patience at the failure of all orders and exhortations to these poor people to stay at home, Union General Jefferson C. Davis (commanding the Fourteenth Corps), ordered the pontoon bridge at Ebenezer Creek to be taken up before the refugees who were following had crossed, so as to leave them on the further bank of the unfordable stream and thus disembarrass the marching troops. It would be unjust to that officer to believe that the order would have been given if the effect had been foreseen. The poor refugees had their hearts so set on liberation, and the fear of falling into the hands of the Confederate cavalry was so great, that, with wild wailings and cries, the great crowd rushed, like a stampeded drove of cattle, into the water, those who could not swim as well as those who could, and many were drowned in spite of the earnest efforts of the soldiers to help them. As soon as the character of the unthinking rush and panic was seen, all was done that could be done to save them from the water; but, the loss of life was still great.