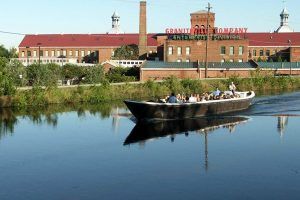 The railroad did not ensure Augusta’s future, as the tug on Americans to move westward grew ever stronger, but other factors had a positive impact on the city. Spurred by the invention in 1793 of the cotton gin, local farmers grew upland cotton in the surrounding countryside making Augusta the center of a large inland cotton market. They shipped their cotton to the port of Savannah via cotton boats down the Savannah River or overland to Charleston on the South Carolina Railroad. Henry Cumming advanced the idea of manufacturing cotton goods locally. He proposed building a canal for water power following the example of Lowell, Massachusetts. Constructed in 1845, the Augusta Canal attracted flour mills, cotton mills, ironworks, and other manufacturing establishments along its banks. By the time of the Civil War, Augusta was one of the few industrial centers in the South. The Historic Augusta Canal and Industrial District represent the economic salvation of Augusta from the 1840s until well into the 20th century.

Augusta prospered again on the eve of the Civil War as evidenced by several buildings and homes constructed during that period. Noted architect, Charles Blaney Cluskey, who lived in Augusta at the time, designed the Old Medical College of Georgia built on Telfair Street in 1835 to house the state’s first medical school. The Brahe House, a fine example of a typical house type in Augusta known as the Sand Hills Cottage, was the creation in 1850 of German immigrant and jeweler, Frederick Brahe. Later it became the first house in town to have electric lighting. Suburban Summerville Historic District became the summer residence of choice for wealthy Augustans, who believed it was healthier due to its higher elevation and lack of mosquitoes. Two fine houses there are the 1849 Reid-Jones-Carpenter House and the Gould-Weed House, circa 1860. Dennis Redmond, a noted horticultural editor, constructed Fruitlands in 1853 on his Washington Road plantation, which became famous under the ownership of the Berckmans family as a fine nursery and still more famous in the 20th century as the clubhouse for the Augusta National Golf Club. 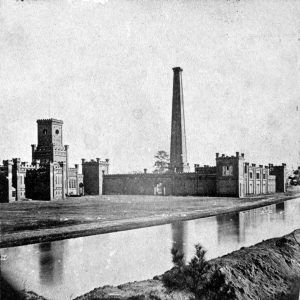 The Confederate government established the Confederate States Powder Works on the Augusta Canal in 1862, at the present site of Sibley Mill. The original arsenal buildings remain largely intact as the centerpiece of Augusta State University, with the Commandant’s House, known as the Stephen Vincent Benét House, used as an administration building. During the Civil War, gunpowder made at the powder works was moved to the arsenal to pack munitions sent to soldiers in the field.

Augusta served as a major center of the Confederacy, providing cotton goods, shoes, guns, munitions, food, and many other commodities. In addition, the city was a religious center of the South hosting meetings for the formation of both the Protestant Episcopal Church in the Confederate States of America at St. Paul’s Church, and the Presbyterian Church in the Confederate States at First Presbyterian Church. The meeting took place there at the invitation of its pastor, Reverend Joseph Ruggles Wilson, who lived with his family in the parsonage, the Woodrow Wilson Boyhood Home. Next door to the future President’s home was the parsonage of First Christian Church, home of future U.S. Supreme Court Justice Joseph R. Lamar. Wilson and Lamar, both sons of prominent Augusta pastors, were best friends as children.

Following the Civil War, Augusta’s economy struggled but rebounded with the enlargement and expansion of the Augusta Canal in 1875. Several large new cotton mills were built along its banks. The old 18th-century village of Harrisburg gained new life, as a large mill village grew around the Harris-Pearson-Walker House. Continuing expansion to the west, the City of Augusta completed its first major annexation in 1880 by taking in what is now the Harrisburg — West End Historic District. 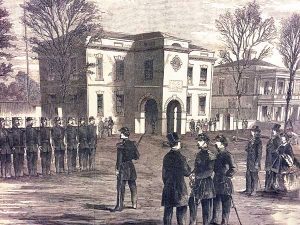 Military presence at the Augusta, Georgia Arsenal during the Civil War.

Many of Augusta’s Irish immigrants lived in a section of town then known as Dublin. The surrounding streets developed as enclaves for various immigrant groups in the 19th century, including African Americans. By the turn of the 20th century, because of Jim Crow laws legalizing segregation, this area, the Laney — Walker North Historic District, became predominantly black. A few blocks to the south is the Bethlehem Historic District, created in the late 19th and early 20th centuries exclusively by and for African Americans. The Sand Hills Historic District, adjacent to Summerville, is another historically black neighborhood that developed parallel to a predominantly white business and residential area after the Civil War.

As the old city continued to expand, most religious denominations realized the need to establish a second congregation in the western end of the city, and often a third or fourth in the suburban areas. Consequently, the Church of the Most Sacred Heart established at Greene and McKinne (13th) streets in 1874 became the second Roman Catholic parish in Augusta. A magnificent new building was constructed between 1898 and 1900 beside the original church, which became a school. Greene Street Presbyterian Church, founded in 1875, was an attempt by the First Presbyterian congregation to expand its influence. Curtis Baptist Church, also founded in the 1870s, and Saint James Methodist Church, dating from the 1850s, were other examples of efforts to evangelize in the city. Most denominations also established a church presence in Laney — Walker, Bethlehem, Harrisburg, Summerville and Sand Hills in the late 19th or early 20th centuries. 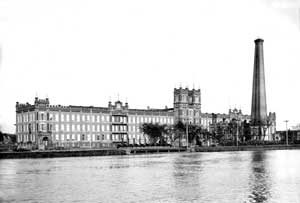 Sibley Cotton Mill on the Augusta Canal in 1913 by Detroit Publishing.

Set up in 1874, the Augusta Cotton Exchange moved to an impressive permanent headquarters building constructed in 1887 in the Queen Anne style. With the expansion of the Augusta Canal, the city was once again a thriving center of a cotton economy. Cotton warehouses lined Reynolds Street between St. Paul’s Church on the east and 9th Street on the west. One can still find the last cotton warehouses, now converted to restaurants and shops, along 9th Street in the Augusta Downtown Historic District. Mills along the Augusta Canal manufactured cotton goods, including the antebellum Augusta Factory (razed in the 1960s), Enterprise Mill, Sutherland Mill, King Mill, and Sibley Mill.

A horse-drawn streetcar was first put into operation in 1866, connecting the neighborhoods that now comprise the Pinched Gut, Augusta Downtown, Broad Street, Harrisburg — West End, and Summerville Historic Districts. In 1890, electrified streetcars provided more access between Augusta’s neighborhoods and its suburbs. This development also sparked Augusta’s tourist industry with the construction of the original Bon Air Hotel in Summerville in 1889-90. The Bon Air attracted wealthy northerners who wanted to escape harsh winters. Soon Summerville had a lively cottage industry of winter boarding houses. 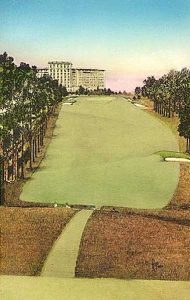 The Partridge Inn emerged from one of these boarding houses, evolving into its present state over a period of 30 years. Pleased with the southern climate, some of the winter visitors built their own homes, or remodeled or enlarged existing cottages in Summerville. Golf came to the village when the hotel established the Bon Air Links as a recreational opportunity for its guests. This course, originally sand, became the Augusta Country Club in 1899. Forrest Hills Hotel and Golf Course, laid out to the west of Summerville in the 1920s, had a complete automobile suburb featuring curving brick streets and Georgian Revival estates on large lots.

Founded in the early 1930s, Augusta National Golf Club is on the Fruitlands property on Washington Road west of Augusta on the northern border of Summerville. Also in the 1930s, the club established the Masters Golf Tournament, which has become golf’s premier event in the United States.

A military town since its beginning as a military outpost in the 1730s, Augusta served as a place of refuge in the French and Indian War and passed back and forth between American and British hands during the Revolution. The city hosted a United States Arsenal beginning in 1819. During the Civil War, it was a center of military preparedness, supplies, industrial output, and support of Confederate troops from the domestic front. The United States government established Camp McKenzie at Augusta during the Spanish American War and Camp Hancock in World War I.

In 1940 shortly before the United States entered World War II, the Federal Government founded Camp Gordon about 10 miles from downtown Augusta in south Richmond County in an area historically known as Pinetucky. After the war started, Augusta became a major military town again. Available space became additional housing, with many of the antebellum and Victorian homes converted to apartment buildings. The resort hotels became year-round commercial hotels. Soldiers in uniform were everywhere. The old arsenal buzzed with activity with high security around the clock. Augusta would never be quite the same. 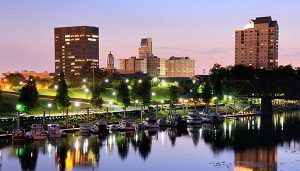 After the war, subdivisions began spreading to the west, south, and east of town. Camp Gordon became a permanent installation, Fort Gordon, the home of the United States Army Signal Corps. In the 1950s, the Army Corps of Engineers finally dammed the Savannah River upstream from Augusta to curtail the periodic flooding that occurred and to generate electricity. The U.S. Government also built the Savannah River Plant in nearby Aiken and Barnwell Counties, South Carolina. These three governmental expansions of post World War II Augusta generated an economic boom reflected in the modern commercial buildings constructed in the Augusta Downtown Historic District. Yet this economic boost for the region eventually caused downtown Augusta to decline, particularly after two shopping malls, both with approximately 1,000,000 square feet, opened within one week of one another in 1978.

Today, Augusta’s downtown is on the rebound with shops and restaurants opening on Broad Street and near the river and many facades of historic buildings have been restored. An Artists Row helped stimulate new energy and became the impetus for a monthly street festival known as First Friday. A reclaimed levee built in the 1910s to hold back the worst floodwaters from the Savannah River is now a park called the Riverwalk. Between 5th and 10th streets, the park has outdoor historical exhibits, developed in the 1980s and 1990s, to interpret the city’s history. Regular festivals are held near the Riverwalk and on a new green space called the Augusta Common, which is in the 800 block of Broad Street. The Augusta Common features a statue of Georgia and Augusta founder James Edward Oglethorpe. A second statue of soul singer James Brown of Augusta overlooks the Common from Broad Street.