Throughout the Seminole War, from 1835 to 1842, the city figured prominently in the national news. Soldiers wrote letters to all parts of the country, giving their impressions of the old town; of forlorn refugees from the surrounding territory camping within the walls, and of pitiful Indian prisoners and hostages confined in the dungeons of Castillo De San Marcos. Popular sentiment favored Osceola, Seminole leader, after his seizure in 1837 while en route to confer with American leaders seven miles from St. Augustine. His death in prison at Fort Moultrie, South Carolina, served to increase the bitterness, but, this and similar controversies lapsed at the close of hostilities.

Florida became a state in 1845. Following Abraham Lincoln’s election in 1860, the state joined other Southern states in declaring secession from the Union on January 10, 1861, the third of the original seven states to do so. However, it would not be for long. After only a year, the state was returned to Union control and Union troops held the Castillo De San Marcos and the town of St. Augustine from 1862 to the end of the Civil War. For a period following the war, the town was practically isolated from the rest of the state. Riverboats operated on the St. Johns River as far as Picolata, and passengers reached the city, a distance of 48 miles, after a six-hour stage and ferry trip. Provisions were mostly brought in from Jacksonville by sea, and prices were exorbitant. In 1871, a mule-drawn railroad was built from Tocoi, on the St. Johns River, to St. Augustine, but, it would be three more years before the first locomotive entered the city in 1874. 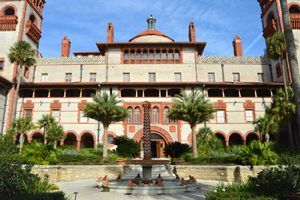 With improved transportation, an increasing number of tourists began to visit the city. Letters and articles written by noted journalists and novelists began to appear in northern papers. Among those attracted in the 1880s was Standard Oil co-founder Henry M. Flagler of New York. Impressed by the beauty of the little Spanish community, he began its development as a winter resort.

Flagler erected two large hotels, took over another to serve as the base of his Flagler System hotels, and founded the Florida East Coast Railway as a means of transporting guests to and from the north to his hotels in St. Augustine, Palm Beach, and Miami. His hotels are still in use today as Flagler College, which was once the Hotel Ponce de Leon, the Lightner Building/City Hall, which was the Alcazar Hotel, and the Casa Monica, which was redone as a county courthouse in the 1960s. In February 1997 Richard C. Kessler of The Kessler Enterprise, Inc. of Orlando purchased the Courthouse and two years later, on December 10, 1999, it was reopened as the restored Casa Monica Hotel.  It is now the only one of Flagler’s three great hotels still serving that purpose.

During these developmental years, Flagler also built or contributed to several churches, including Grace Methodist, Ancient City Baptist, and, the most ornate Venetian-style Memorial Presbyterian Church, which he built in memorial to his daughter and newly born granddaughter, who died of illness shortly after she gave birth. Flagler was so devastated by their deaths that he had the construction of the church go around the clock and finished within a year. 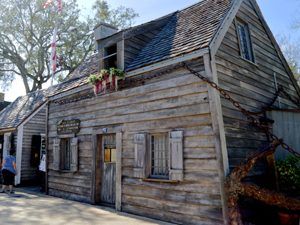 In addition to the churches, Flagler commissioned a baseball park, which became home to one of America’s pioneer professional Negro League baseball teams, the Ponce de Leon Giants; and built the city’s first hospital.

Though the large numbers of wealthy setters from the North began to alter the character of St. Augustine, the city continued to retain its quaint and romantic buildings and it unique individuality. In 1884, author George M. Barbour described the city:

“Coming to it from bustling, active, Northern-like Jacksonville or Fernandina, one is conscious of a complete and sudden change of time and place—as if the brief ride on steamer and railway had produced magic results, and landed him in some quaint, old, dead-alive Spanish town of the middle ages.” 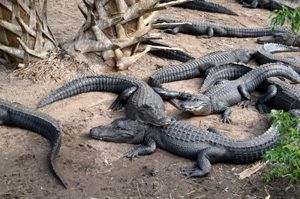 The St. Augustine Alligator Farm, which began in the late 19th century as a small exhibition of Florida reptiles, quickly became a quintessential Florida attraction. Today it functions as a modern zoo serving the public and the scientific community with educational shows and exhibits, important research, and worldwide conservation efforts. Another early attraction enticing visitors was the Fountain of Youth, which was created in 1904. Now known as the Fountain of Youth Archaeological Park, it’s a tribute to the spot where Juan Ponce de Leon is traditionally said to have landed. The legend of the Fountain of Youth became particularly prominent in the 16th century. According to an apocryphal combination of New World and Eurasian elements, Juan Ponce de Leon was searching for the Fountain of Youth when he traveled to what is now Florida in 1513.

In the early 20th century, the rich and wealthy found other parts of Florida to which they could escape and with them, fled Flagler’s dream of turning St. Augustine into the “Newport of the South.” The city nevertheless remained a tourist town and the tourism industry came to dominate the local economy. 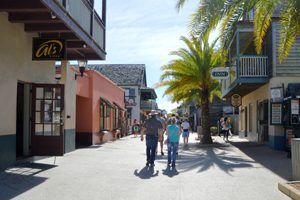 The Florida Land Boom of the 1920s left its mark on St. Augustine with the residential development of Davis Shores, on the marshy north end of Anastasia Island. Continuing on through the 20th century, many of the St. Augustine hotels were used as sites for training Coast Guardsmen during World War II, and in the 1960s was in the midst of numerous Civil Rights disputes. The city also celebrated its 400th anniversary in 1965 and undertook, in cooperation with the State of Florida, a program to restore parts of the colonial city. The continuation of an effort that actually began in 1935, what became known as the “Restoration” resulted in preserving the thirty-six remaining buildings from the colonial era and the reconstruction of some forty additional colonial buildings that had previously disappeared, transforming the appearance of the historic central part of St. Augustine.

Today, this beautiful city of about 14, 000 residents continues to provide multiple historic, cultural, and other attractions to its two million annual visitors. 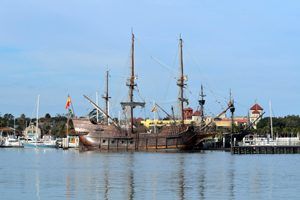