In return for Spain’s help during the American Revolution, Florida was transferred back to Spain by the Treaties of Versailles, part of the Peace of Paris, in 1783. Just like when the whole Spanish population moved to Cuba when the British took control, this time most of the British departed for British colonies in the Caribbean in spite of Governor Zespedes’ promise of equal treatment.

Governor Zespedes knew Florida needed more people, regardless of nationality, in order to survive. He offered large land grants, a ten-year tax-free occupancy, and a cash bonus to any family who would come to start a farm. He even offered to pay each pioneer 1.5 cents a day for feed supplies. Despite these generous offers, it was necessary by 1786 to drop the restrictions on non-Catholic settlers. Equally significant, the Spanish Government agreed to allow the migration of slaveholders into Florida for the first time.

One of the slaveholders who took advantage of the land grant offer was Zephaniah Kingsley, who along with his wife Anna Madgigine Jai, herself an ex-slave from Africa, owned and managed Kingsley Plantation on Fort George Island.

This influx of different people, including Americans, made the Second Spanish period much more cosmopolitan than the First Spanish Period had been. It also brought about the Patriot’s Rebellion (1811-1812) in which American “patriots” living in Spanish Florida, clandestinely supported by Georgians and unofficially recognized by the US government, attempted to rise up and seize Florida for the United States. With the promise of 200 acres of Florida land as an incentive, dozens of Georgia farmers marched to attack St. Augustine. They destroyed Spanish plantations and left only after a British fleet intervened. The U.S. government immediately declared no knowledge of the plan.

Still, Spain’s days in Florida were numbered. By 1800 Spain’s fortune and power were waning. Her once-mighty empire was crumbling. There was little money to maintain the Castillo and even less for the outpost fort at Matanzas. Erosion and rainwater took their toll. FortMatanzas was already in poor condition by 1821 when Florida was ceded to the United States through the Adams-Onís Treaty which turned Florida over to the U.S. in exchange for canceling out a $5 million debt, reimbursement for runaway slaves who had found refuge in Florida.

Only three Spanish soldiers were in residence at Fort Matanzas when the United States took possession in 1821. The interior was in ruins, and the gun platform’s east wall and its foundation had cracked. The U.S. Army sent an inspector who reported that the tower was obsolete and had only historical value. Although owned by the War Department, Fort Matanzas was never occupied by the United States Army.

These early years as part of the United States were years of conflict for Florida. For years Indian groups who had been pushed off their land in Georgia and Alabama by white settlers had found refuge in Spanish Florida. These Indians, primarily the Creek, along with escaped African slaves, became known as Cimmarones or wild ones, the probable origin of the word Seminole. However, once Florida became a territory of the United States, these Indians were no longer safe. The US Army raided their settlements, and the Seminoles and whites engaged in a series of long, expensive wars ending with 4000 – 5000 Seminole Indians being shipped to reservations in Oklahoma, and the tattered remnants of a proud people finally finding some refuge in the wilds of the Everglades.

Florida was granted statehood in 1845 as the 27th state. At the beginning of the Civil War, Florida was the third state to vote for Secession which she did on January 10, 1861. Confederate troops immediately took Fort Marion (Castillo de San Marcos) from the lone Union sergeant caretaker who asked for a receipt and travel money out of town. Believing the war would soon be over and would never come this far south, the Confederates removed most of the cannon from FortMarion and sent them to more strategic forts.

In March 1862, the Union Navy arrived off the coast of St. Augustine. With no guns for defense, Fort Marion was abandoned, and the Union forces took over. The St. Augustine area remained in Federal hands for the remainder of the war. With the St. Johns River heavily patrolled, Confederate blockade runners attempted to use the Matanzas Inlet during the War, but the Union army stationed a barge in the river near the fort ruins, and attempts to pass were unsuccessful.

This activity had little effect on the old tower, however, and soon the area was abandoned once more, and with the passage of time, the tower began to deteriorate even further. It was a quaint ruin overgrown with vegetation in 1872 when artist Harry Fenn sketched the fort for the book Picturesque America.

Whisked south in their private cars on Flagler’s Florida East Coast Railroad, notables such as the Vanderbilts, Rockefellers, and Morgans made St. Augustine their winter home, expanding the old colonial city westward on King Street and north on San Marco. Many of the buildings downtown reflect this golden era. The Villa Zorayda, an exotic Moorish Revival style residence with courtyards and towers built in 1883 on King Street, is from this glittering time-period as is the Flagler Memorial Presbyterian Church (1880), and Castle Warden (1879), now Ripley’s Believe it or Not Museum.

These wealthy visitors came down the river on excursions to the Matanzas ruins, and they also visited Fort Marion in town which, although still an active military fort until 1899, was also falling into disrepair. They believed these historic structures must be saved, and they spoke with their friends and congressmen. In 1916 Congress granted $1025 for the repair of these structures, the first time that the federal government had granted money for historical preservation. 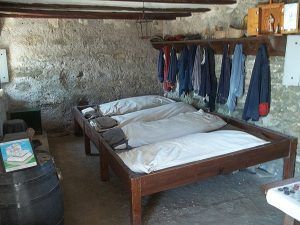