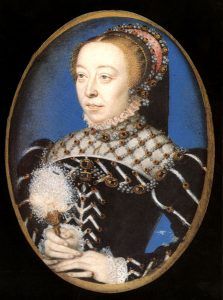 In France, among all parties, the news of the massacre of Ribault’s colony had kindled fury against the Spaniards. Even to Queen Catherine, in that hour of humiliation, the slaughtered men in Florida were not Huguenots but French. She rejected King Philip’s insinuating suggestions to make Admiral Coligny the scapegoat, avowed her own responsibility, and protested bitterly the effrontery and cruelty of Philip’s agent in murdering her subjects. But, her position in divided France was such that Philip had the whip hand, and he couched his answers in terms to make her feel it. She dared not go beyond high words, lest he publish her as an enemy of her own Church and, by some sudden stroke at her or her invalid son, hasten the end at which, all his intrigues in her kingdom aimed, namely, the complete subservience of France to the Spanish Crown.

Queen Catherine could not avenge the wrong; but Dominique de Gourgues could. Gourgues was an ex-soldier and a citizen of good family; his parents were Catholics and he is not known to have been a Protestant. He had been captured in war by the Spaniards and had been forced to serve as a galley slave. Now, to his own grievance, was added that of his nation; and he chose to avenge both. It is possible that he did not have the aid of the Queen and Admiral Gaspard de Coligny in raising his expedition — ostensibly to engage in the slave trade — but quite probable that he did. He timed his stroke to fall during the absence of Menendez in Spain. With one hundred and eighty men he went out in August 1567, and spent the winter trading in the West Indies. Early the next year he proceeded to Florida, landed quietly near St. John’s River and made an alliance with Chief Saturiba, who was hostile to the Spaniards but, an old friend of the French. Saturiba received him with demonstrations of joy, called his secondary chiefs to a war council, and presented Gourgues with a French lad whom his tribe had succored and concealed from the Spaniards since the time of Jean Ribault.

His force, augmented by Saturiba’s warriors, Dominique de Gourgues marched stealthily upon San Mateo. The Spaniards in the outpost blockhouses had just dined “and were still picking their teeth” when Gourgues’ cry rang out: “Yonder are the thieves who have stolen this land from our King. Yonder are the murderers who have massacred our French. On! On! Let us avenge our King! Let us show that we are Frenchmen!”

The garrison in the first blockhouse, 60 in all, were killed or captured. The men in the second blockhouse met the same fate; and the French pushed on towards San Mateo fort itself, their fury having been increased by the sight of French cannon on the blockhouses — reminders of Fort Caroline. The Spaniards at San Mateo had received warning. A number had made off towards St. Augustine; the remaining garrison opened artillery fire upon the French. The trees screened the Indian allies; and the Spaniards, in making a sortie, were caught between the two forces. “As many as possible were taken alive, by Captain Gourgues’ order, to do to them what they had done to the French.” The completion of Gourgues’ revenge is thus related: “They are swung from the branches of the same trees on which they had hung the French, and in place of the inscription which Captain Menendez de Aviles had put up containing these words in Spanish, do this not as to Frenchmen but as to Lutherans, Captain Gourgues causes to be inscribed with a hot iron on a pine tablet: do this not as to Spaniards nor as to Marranos [secret Jews] but as traitors, robbers, and murderers.”

Captain Dominique de Gourgues now turned homeward. On the way, he captured three Spanish treasure ships, threw their crews overboard, and took their contents of gold, pearls, merchandise, and arms. With hideous vindictiveness on land and water, had he repaid the Spaniards for the massacre of his countrymen on Florida soil and for his own degradation as a slave in their galleys on the sea. And he, too, like Menendez, stepping red-handed upon his native shores, was acclaimed as a hero.

Troubles now came fast upon the Spaniards in Florida. Indians rose and massacred the soldiers at Tampa Bay. The garrison at San Antonio was compelled by hunger and the hostility of the natives to withdraw to St. Augustine. In rapid succession, the interior posts established by Pardo and Boyano were destroyed by the Indians or abandoned to save provisions. By 1570, Indian attacks and shortage of food had forced numbers of the colonists to leave the country.

The missionaries succeeded little better than the soldiers; though Menendez had sent out 14 more Jesuits from Spain, in 1568, under Father Juan Bautista de Segura. Father Rogel, driven from San Antonio and then from Santa Elena, returned to Havana. Father Sedeno and some five companions went to Georgia, where they labored for a year with some success.

Brother Domingo translated the catechism into the native tongue and Brother Baez compiled a grammar, the first written in the United States. Father Rogel went to Santa Elena, where he founded a mission at Orista, some five leagues from the settlement of San Felipe. He succeeded well for several months, but finally, the Indians became hostile and, when the commander levied a tribute of provisions to feed the hungry settlers, they rebelled, and Father Rogel was forced to withdraw to Havana in 1570. At about the same time and for like reasons, the missionaries abandoned Georgia.

Though he had failed on the peninsula and on the coasts of Georgia and South Carolina, Father Segura did not give up; but, transferred his efforts to Chesapeake Bay, where, with six other Jesuits, he founded a mission at Axacan, perhaps on the Rappahannock River. But, within a few months the fickle Indians turned against them and slew Segura and his entire band in 1571. On his return from Spain, Captain Menendez de Aviles went to Chesapeake Bay and avenged the death of the missionaries by hanging eight Indians to the yardarms of his ship. The Jesuits, after the martyrdom of Segura, abandoned the field of Florida for Mexico. But, in 1573, nine Franciscans began work in this unpromising territory. Others came in 1577 and, in 1593, twelve more arrived under Father Juan de Silva. From their monastery at St. Augustine they set forth and founded missions along the northern coasts. Fray Pedro Chozas made wide explorations inland; and Father Pareja began his famous work on the Indian languages. By 1615, more than 20 mission stations were erected in the region today comprised in Florida, Georgia, and South Carolina. The story of these Franciscan missions, though it is little known, is one of self -sacrifice, religious zeal, and heroism, scarcely excelled by that of the Jesuits in Canada or the Franciscans in California. It is recorded in the mute but eloquent names scattered here and there along the Atlantic coast.

In 1572, Captain Menendez de Aviles was, first of all, a seaman; and he was called home to assist King Philip in the preparation of the great Armada which the King was slowly getting ready. But, Menendez did not live to command the Armada, for he died in 1574. His body was carried to the Church of St. Nicholas in Aviles and placed in a niche on the Gospel side of the altar. His tomb is marked with this inscription: “Here lies interred the very illustrious cavalier Menendez de Aviles, a native of this town, Adelantado of the Provinces of Florida, Commander of the Holy Cross of La Carca of the Order of Santiago and C. Gen. of the Ocean Sea and of the Catholic Armada which Lord Philip II. Assembled against England in the year 1574, at Santander, where he died on the 17th of September of the said year being fifty-five years of age.”

At the time when Menendez returned to Spain, King Philip’s intrigues in France reached their logical culmination — in the Massacre of St. Bartholomew and the end of Admiral Coligny. France, again in the agonies of civil strife, was no longer a menace. The new shadow on his horizon was England — with her growing navy and her Protestant faith; and her Queen, who was as expert a politician as any man sent by Spain to her court, and more subtle then Philip himself. “This woman is possessed by a hundred thousand devils,” the Spanish envoy wrote to his King. During the years while England, after the upheavals of Queen Mary’s reign, was becoming stable and waxing strong, Queen Elizabeth’s dexterity kept King Philip halting from any one of the deadly blows he might have struck at her. By her brilliant wit and her mendacity, she kept him pondering when he should have been acting. She worked upon his religious zeal and his vanity by letting herself be surprised by his envoy with a crucifix in her hands, or blushing with a pretty confusion over Philip’s portraits; and by these and other methods, she kept him from bringing his intrigues among her Catholic subjects to a head, lessened his support of Mary Stuart, and caused him to put off his designs for her own assassination.

But, this play could not go on forever. The piracies of the English sea-dogs, the honoring by Elizabeth of Francis Drake on his return from looting Spanish ships and “taking possession” of the North Pacific coast as New Albion, the attempts of Raleigh and White to plant colonies in Virginia and Guiana, and later, the sacking of Santo Domingo and Cartagena and the destruction of St. Augustine by Drake, and, finally, the persecution of the Jesuits in England, at last spurred King Philip to combat. By the Pope, who had issued a Bull of Deposition against Queen Elizabeth, he had long been urged to conquer renegade England; and Mary Stuart had bequeathed to him her “rights” as sovereign of that kingdom. Philip had seen that his distant colonies could not be defended unless he were sole King of the Ocean Sea.

So, the destiny of North America was decided on the North Sea, in July, 1588, in the defeat of the Spanish Armada by Sir Francis Drake. The mastery of the ocean passed from Spain to England. The waterways were open now for English colonists to seek those northern shores which Spain had failed to occupy. In time, the sparse settlements in the Spanish province of Florida came to be hemmed in on the north by the English colonies of Georgia, South Carolina, and Alabama and stopped on the west by the French colony of Louisiana.

Jamestown, Virginia in 1607; Charleston, South Carolina in1670; Savannah, Georgia in 1733 – thus the English advanced relentlessly. And, in 1763, following the Seven Years’ War, in which Spain fought on the side of France, the English expelled Spain from Florida entirely. Spain’s recovery of her foothold there during the American Revolution, and her struggle afterward to hold back the oncoming tide of the now independent Anglo-Americans, profited her nothing in the end; for in 1819, 212 years after Jamestown, all that remained to Spain of her old province of Florida passed to the United States.

About This Article: This article was excerpted from The Spanish Borderlands: A Chronicle of old Florida and the Southwest, edited by Herbert Eugene Bolton, a professor at the University of Texas. This book was one in a fifty volume series called the Chronicles of America, published by the Yale University Press in 1918. The volumes were written by various historians of the time on topics of American History. In 1923, Yale decided to create a series of films based on the books. Fifteen films were ultimately produced. Though the article, as it appears here, is contextually the same, it is not verbatim, as it has been edited to a small extent.