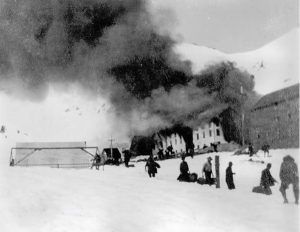 But, no sooner had they bought these mines when the company was plagued by problems including the Sunnyside surface plant burning down forcing the temporary closing of the mine, the influenza epidemic of 1918, avalanches, and power blackouts. However, the Sunnyside Mill was completed at Eureka, the surface plant was rebuilt, and the mine complex housed 220 workers. 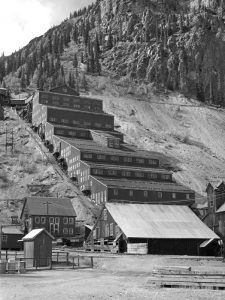 But, in 1920, a national recession hit and the price of industrial metals dropped to the point that operations at the Sunnyside Mine were suspended once again. In 1922, the mine reopened, 216 men were working, and 500 tons of ore were processed per day. The company then began to focus on developing its adjoining claims and by the next year, its workforce reached 360 men.

The Great Depression caused the Sunnyside to suspend work in 1930 and it remained closed until 1937. That year, the Sunnyside Mining & Milling Company was Colorado’s largest gold producer. But, the accessible ore reserves were almost gone and in 1939, the company laid off the workforce and closed the mine. 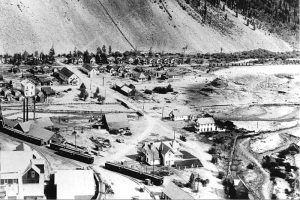 Eureka, Colorado from the top of the Sunnyside Mill

The town of Eureka dramatically suffered. During its many years of existence, it had never grown very big and was comprised mostly of miners working at the Sunnyside Mill. At one point it was described as having “the finest saloons anywhere” on its main street.

The Silverton-Eureka segment of the Silverton Northern Railroad also stopped operations in 1939. In the final years of its operation, the railroad operated a railcar that was unique in design and a favorite of the miners. The little railbus “The Casey Jones”, was built in the shops at the Sunnyside Mill. It can be seen today at the San Juan Historical Society’s museum in Silverton.

The Sunnyside Mill continued to operate until 1941. The railroad removed its tracks in 1942 and the post office closed the same year. The mill facilities were sold for scrap in 1948. By this time, the town was abandoned and comprised of empty buildings 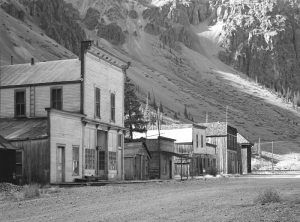 In 1959, Marcy-Shenandoah Company leased the Sunnyside from ASARCo and began to drive the American Tunnel from the Gold King Tunnel at Gladstone on the other side of Bonita Peak towards the Sunnyside and Washington veins under Lake Emma. But, before they made much progress Marcy-Shenandoah sold to the Standard Metals Company. The new company continued with the plan. The ore was removed from the tunnel in Gladstone and transported by truck down to Silverton.

In 1970, the Standard Metals Company went bankrupt and stopped work at the American Tunnel, but work was continued by the Washington Mining Company. At this time, some of the most valuable workings were located below Lake Emma. Eventually, only 90 feet separated the lake and the underground tunnels.

During the winter of 1977-78, a fault appeared in the mine shafts under the lake and began to leak, but experts felt that the distance between the lake and mine was safe. They were wrong. 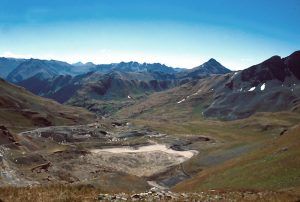 On Sunday, June 4, 1978, at approximately 6:50 p.m. the lake broke through into the mine, dumping its entire contents, estimated to have been 500 million gallons of mud and water, into the mine. The violent rush of water blew out of the two-mile-long American and one-mile long Terry Tunnels. At the portal of the American Tunnel at Gladstone on the other side of the mountain, water flowed from the mine in 8-10 foot waves, filled with mine timbers, equipment, and debris. A 20-ton Plymouth Locomotive parked below the main ore pass was completely flattened. Fortunately, because this accident occurred on a Sunday, the mine was closed and no one was inside working. Had it happened on any other day as many as 125 men would have been killed in the violent inrush of mud and water.

Afterward, the tunnels were filled to the top with mud and the mine was closed for two years in order to repair the damage. Although the mine was insured for $900 million, the insurance company initially refused to pay any damages. However, after an expensive court battle, the insurance company was ordered to pay $5,500,000. But, for the Sunnyside, it would never again regain its profitable status. The mine was closed in January 1985. 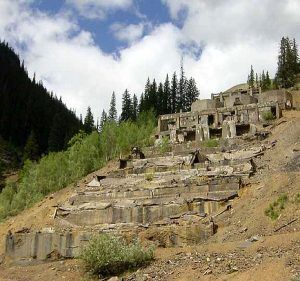 Remains of the Sunnyside Mill in Eureka, Colorado, courtesy Wikipedia

Afterward, it was Alta Bay Mines in a joint venture with Echo Bay Mines, Ltd. that leased the mine and put it back into production. Later, the mine was sold to the Sunnyside Gold Corp., a subsidiary of the Canadian mining giant Kinross Gold. The company was unsuccessful in making the mine profitable and the mine closed for the last time in July 1991.

Over the years, the Sunnyside became Colorado’s largest operating gold mine and also produced silver, lead, copper, and zinc. It is credited with a production of more than 7 million short tons of ore over its lifespan of 118 years. In the years following the mine’s final closure, the entire mining area has been reclaimed by plugging the many miles of tunnels and other means. The cost of reclamation is more than all of the profits the mine made in its nearly 118 years of operation. Today, the overall Superfund cleanup above remains in the study stages.

Though the town of Eureka once had a number of buildings, many were taken down by the elements of nature and others were purposely torn down to avoid taxes. Today, the old townsite is marked only by its gravel roads, one small rebuilt building, and the old Sunnyside Mill’s foundation on the hillside. It is now home to the Eureka Campground. 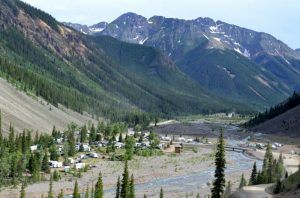 The site of the Sunnyside Mine can be reached by traveling about 1/2 mile north on Co Rd 2, and taking a sharp left on Co Rd 25 for 3.5 miles. Only the foundations of the old mine exist today and there is an empty “bowl” where Lake Emma once stood.

Eureka is located about 7.5 miles northeast of Silverton on County Road 2. The road can be traveled by any vehicle in good weather. Beyond Eureka, it is just 4.2 miles to Animas Forks, which is the access to the Alpine Loop Backcountry Byway. The byway, which requires a 4-wheel drive, high-clearance vehicle offers stunning views, numerous mining remains, and several ghost towns along the 65-mile loop.

Just about a half mile north of Eureka is a side road that veers to the right to the Eureka Lodge. This 1929 boardinghouse was once part of the Martin Mining Complex and is now listed on the National Register of Historic Places. It now serves as a lodgin facility for groups, weddings, family reunions, and retreats. 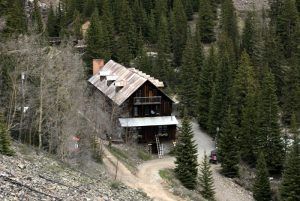 The Eureka Lodge is a restored 1929 boarding house that now hosts groups.