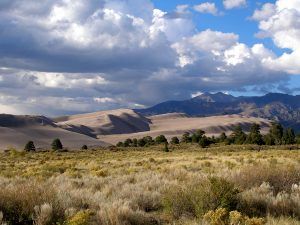 The earliest fur-trading expeditions were based in the New Mexican trading towns of Santa Fe and Taos, which were strategically positioned at the terminus of the newly opened Santa Fe Trail. With a convenient commercial link to U.S. and international markets, the fur trading business developed rapidly. William Becknell, forgetting about the Santa Fe Trail almost as soon as he had found it, set out to locate a practical route to the beaver-rich Green River Valley other than the Old Spanish Trail. In 1824, he led a party north from Taos to the Green River. In August of that same year, William Huddart with 14 others, left Taos, traveled north through the San Luis Valley, crossed the Cochetopa Hills at an ancient Ute and buffalo traverse, and by way of the Gunnison and Uncompahgre Rivers pushed on into eastern Utah to the Green River. At about the same time, an expedition led by Kit Carson and Jason Lee followed the Old Spanish Trail along Escalante’s route north and met Antoine Robidoux at the mouth of the Uinta River in Utah. By the end of 1824, at least six parties of trappers had traveled north from Santa Fe or Taos, through southwestern Colorado, into the Green River region by way of the Old Spanish Trail or the northern extension of that trail via the Cochetopa Pass route, also known as the Trappers’ Trail. Besides those of Huddart, Becknell, and Carson, there were groups led by William Wolfskill, Etienne Provost, and Antoine Robidoux.

Through the mid-1820s, the fur brigades of Provost, Robidoux, and Becknell repeatedly worked the Green River until larger trapping expeditions invaded this choice beaver country. Such trapping parties were directed by the future Fur Barons, William Ashley, and John Jacob Astor. In the spring of 1824, Ashley sent his men out to trap the region and then arranged to meet them at a “rendezvous” on Henry’s Fork of the Green River to exchange their furs for the trading goods that he had brought from St. Louis, Missouri, the rendezvous system proved so successful that extensive trapping became the order of the day, and the large operations such as the Hudson’s Bay Company and the American Fur Companies reaped huge profits from the fur trade. By 1826, however, many of the northern streams became “trapped out” and by the early 1830s the prices of pelts had begun to drop.

The over-exploitation of streams and the intense competition of the large fur companies prompted many trappers and traders to move south from the Green River Valley. Antoine Robidoux, maintaining a trading post at Taos, built a fort near present Delta, Colorado in 1828, from which he sent out trapping parties along the Colorado River as far south as the Gila River, as well as on the various streams in closer proximity to the fort.

Fort Uncompahgre, Colorado’s first and America’s second “general store” west of the Continental Divide, served as a trading and supply establishment for the “free trappers” in the vicinity, and was located on the north-south trailway used by trappers traveling from New Mexican settlements north. By the mid-1830s, Robidoux had set up a direct arrangement with his brother’s trade establishments in St. Louis and Fort Osage, Missouri. Bypassing the New Mexican settlements, the Robidoux brothers freighted supplies directly through the Gunnison River country by way of Cochetopa Pass to the Fort. Until its destruction in 1844, the fort also served as a supply base for immigrants moving westward to California.

Although the fur trade excitement had declined, Antoine Leroux, Kit Carson, Charles Autobees, Tom Tobin, and “Uncle Dick” Wootten along with Robidoux, continued to trap the Gunnison River area in the Fort Robidoux district during the 1830s and 1840s. While these last efforts at free trapping were being undertaken, several of the mountain men who had blazed trails important to the fur business had turned their attention to California, a distant source of commercial interest.

Although New Mexicans were the first to inaugurate the commercial trade to California, Americans were quick to see its potential. Traffic to California by annual caravan was begun by New Mexico’s Governor Antonio Armijo in 1829 and 1830. Utilizing knowledge gained from fur trading explorations, Armijo and his party moved up to the Chama River from the New Mexican outpost at Abiquiu and continued on the traders’ trail until they reached the San Juan River, which they followed through parts of southwestern Colorado in the Four Corners region. They pushed on to the Colorado River and traversed the Old Spanish Trail to California. 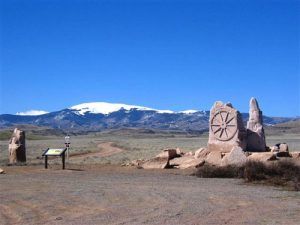 Directly on the heels of Armijo were parties that included among its members explorers such as William Wolfskill, Ewing Young, Kit Carson, and Tom “Peg-Leg” Smith. Although their routes varied substantially at times with those of the New Mexican traders, the general course was northwesterly from Taos to the Colorado River, crossing sections of southwestern Colorado, and, via the Old Spanish Trail, on to California. The Young-Wolfskill party of 1830-1831 is credited with covering the entire distance of the Old Spanish Trail, which became the regular caravan route for the Missouri-Santa Fe-Los Angeles trade. Because of small amounts of snow in the winter, many early immigrants and traders traveled over Cochetopa Pass in order to reach California, and according to Antoine Leroux, two old trappers, William Pope and Isaac Slover and eight members of their families, made the first such trip from Taos to the Pacific Coast by wagon in 1837.

In 1842, Marcus Whitman and J. B. Chiles, in two separate journeys, made the return trip from California to Santa Fe, which took them over basically the same route as that followed by the Slover-Pope party and the Old Spanish Trail through southwestern Colorado.

By the mid-1840s, relations between Mexico and the United States had become strained. The Texas independence question and the need to silence any signs of rebellion in New Mexico and California led to a restriction of trade for Americans along the Old Spanish Trail. The imposition of duties further deterred commercial traffic, and with a decreased demand for pelts in New York and London, the day of the trapper and trader in the southwest drew to a close. What the trapper-explorer accomplished, however, cannot be measured merely in a commercial sense, for these unofficial explorers had plotted the courses of the western rivers, discovered the passes through the Rocky Mountains, prepared the way for government explorations, and opened the door for European settlement by breaking down Indian self-sufficiency. The first permanent wedge had been driven into the rugged transmontane west. Although a few of the mountain man-fur trapper breed would aid the coming generation of Army explorers in the late 1840s and 1850s, most of what the trapper had learned by hard experience had to be relearned and reinterpreted in order to suit the needs of a more modern generation. Antoine Leroux, who had repeatedly trapped and explored the present-day Gunnison country, was one of the trappers who would later describe his knowledge to Senator Thomas Hart Benton of Missouri and others seeking information of the best rail route to the Pacific. Leroux later served as a guide on the Gunnison exploration party in 1853, an expedition that would greatly influence the future events of southwest Colorado.

Discovery of the Rocky Mountains

Source: The Bureau of Land Management