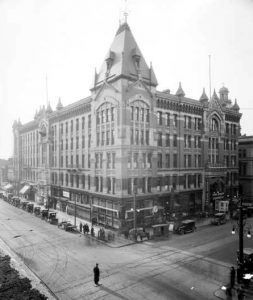 Baby Doe’s fame lies mostly in her dazzling beauty. Admirers wrote poetry about her petal-soft complexion, lovely strawberry-blond curls, deep blue eyes, and sparkling personality. Baby Doe’s friends recognized her inner charms as well. Baby Doe made friends with many of the actors and actresses who played at the Grand Opera House, who accepted her outgoing personality, finding her both lovely and admirable. This lessened the hurt that she felt by Denver’s social elite who thought she was shocking, showy and scandalous. The wildly ambitious Baby Doe was hailed as the “Silver Queen of the West,” while Horace was touted as Denver’s “Grand Old Man.”

For Horace and Baby Doe, the years following their marriage were a constant whirlwind. The Tabor mines were yielding millions of dollars in silver, especially the Chrysolite and Matchless Mines. The Matchless Mine alone produced over 9 million dollars. The Tabors continued to enjoy their expensive parties, distant travels, and lavish nights at the newly built Tabor Grand Opera house. In addition, campaigns for political office (not to mention jewelry, furs, and gowns of the finest silk and lace for Baby Doe and their two young daughters) occupied much of Tabor’s time and money. The Tabor fortune grew by the day and being too vast to count, allowed the Tabors to spend extravagantly. The generous Horace Tabor opened his wallet for investments in more silver mines, new companies that needed capital, and some risky deals that did not land a dime in profits. The ten golden years between 1883 and 1893 were filled with endless possibility for Horace and Baby Doe. 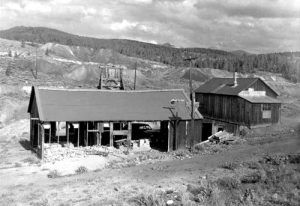 With Baby Doe on his arm, Horace Tabor’s plans to turn Denver into the “Paris of the West” seemed within reach. Baby Doe’s dreams matched her husband’s – an adventure of grand living and great civic accomplishments. However, like all good things, it ended all too soon. The fairytale ended in 1893 when the country moved to the gold standard. Silver, Horace’s main holding, along with parcels of highly mortgaged property came crashing down, along with the Tabors’ lifestyle. Horace, failing to listen to the advice of others and diversify, faced ruin. In the interim, and adding to the crisis, Tabor had also made a number of unsuccessful, if not unwise, investments in foreign mining ventures that failed. He lost huge amounts of money in Mexico and South America. However, regardless of the now destitute condition of the Tabors, Horace never lost faith in the future, and until his dying day, he always found work of some kind, hoping to recapture his lost wealth. 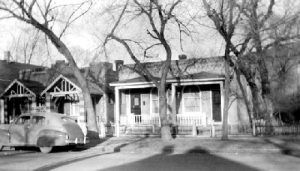 The cottage where the Tabors moved after having lost their fortune. Photo taken in 1962.

Baby Doe and Horace, along with their young daughters Elizabeth “Lillie” and Rose Mary “Silver Dollar” moved out of their Capitol Hill mansion and into a rented cottage. At age 65, Horace was shoveling slag from area mines at $3.00/day until he was finally appointed postmaster of Denver just a year before his death. Baby Doe remained optimistic about regaining Tabor’s lost fortune, but it never panned out.

Many people who disliked Baby Doe predicted that she would divorce Tabor if he ever lost his fortune. However, Baby Doe was loyal and devoted to her husband until the end. In April 1899 Horace took ill with appendicitis and a few days later, before his death, he was said to have told her …”Hang on to the Matchless Mine, if I die, Baby, it will make millions again when silver comes back.” However, this statement was later disputed as being made up by a writer who wanted to sell her books. Flags were lowered to half-mast in Colorado and 10,000 people attended the funeral.  Baby Doe, just 45 years old, would never again live a lavish lifestyle.

Still beautiful and relatively young, Baby Doe could easily have remarried. She chose, instead, to “hold on to the Matchless,” continuously seeking funds to “work” it. With her two children in tow, Baby returned to Leadville and took up residence in the one-room, 12 by 16-foot structure that originally served as a tool shed at the Matchless Mine. Her elder daughter, 15-year-old Lillie, so resented the place, she boldly stated that she was leaving, and borrowing the money for the train fare from her uncle, she went to Wisconsin to live with her grandmother, ceasing all contact with her mother and sister. 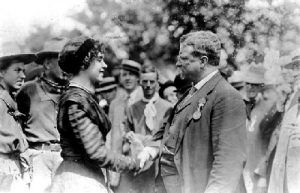 Silver Dollar, a 10-year-old tomboy, initially thrived on the adventure of living and working at the mine. She liked to write poetry and Baby Doe encouraged this endeavor, actually helping her to get a couple of songs published. One of these included a song to celebrate a visit by Theodore Roosevelt to Leadville in 1908, called “President Roosevelt’s Colorado Hunt,” the music written by a friend in Denver.

The song was well-received in Colorado and a long article regarding Silver Dollar’s “budding career” was printed in the Denver Post. In 1910, the song was actually sung for Mr. Roosevelt and Silver Dollar got to meet the man. 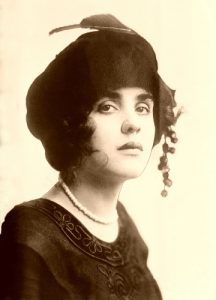 But, alas the spirited girl, began to attend the parties of Leadville and started to drink heavily. After a heavy night of partying, she became involved in a scandal with a local saloon keeper and Baby Doe sent her to Denver, where she thought she would be better off.

Silver Dollar obtained a job at a local newspaper and wrote a western novel called The Star of Blood. But neither adventure was successful. Then she tried her hand at publishing a small periodical, but her life was spiraling downward and after a couple of years, she decided to move to Chicago, Illinois. There, she planned to make one last stab at making a career of writing and if that proved unsuccessful, she told her mother, she was going to join a convent.

Baby Doe never saw her again, but received sporadic letters, until an article appeared in the Denver paper, which outlined the details of Silver Dollar’s grizzly murder.

During her time in Chicago, Silver Dollar had continued on a path of destruction, getting involved with drugs, continuing to drink, and joining a burlesque show for a period of time.

She lived with one after another ill-fit man, until one of them killed her by pouring scalding water over her naked body. Silver Dollar was 35. Baby Doe denied the entire story, stating that Silver Dollar was safely in a convent. Though she probably knew it was true, Baby Doe would never admit otherwise.

Baby Doe, who stayed at the cabin for her remaining 35 years, was a proud woman who routinely refused charity of any kind. Periodically she would trudge into town for supplies, which she paid for with chunks of “valuable” ore she picked up around the property, unaware that the sympathetic shopkeepers who accepted her samples as payment probably dumped the worthless rocks as soon as she left.