After Mexican Independence in 1821, American and Mexican traders developed the Santa Fe Trail. It quickly became a commercial and cultural link between the United States and Mexico. It also served as a road of conquest during the Mexican-American War and later the Civil War. Early in the history of the Santa Fe Trail, the Cimarron Route was used by wagon traffic. The Mountain Route could be used by pack animals but was rarely used before 1846. This route of the trail included several notable sites.

In the late summer of 1832, a Bent, St. Vrain & Company wagon train eastbound out of Santa Fe pioneered what would become the Mountain Route (or Bent’s Fort Route) of the Santa Fe Trail. The party left Santa Fe via Taos, New Mexico, crossed Raton Pass into what is now southeastern Colorado, and reached the Arkansas River near the future location of Fort William (Bent’s Old Fort) eight miles northeast of present-day La Junta. From there they traveled down the Arkansas River, joined the Cimarron Route and reached Independence, Missouri in November.

Fort William, named for William Bent and later known as Bent’s Old Fort, occupied an area that at the time was the border between the United States and the newly independent Mexico. The rectangular adobe fort faced eastward and had towers at each corner and 14-foot walls of three-foot thickness. Constructed by Mexican laborers employed by brothers Charles and William Bent and partner Ceran St. Vrain, the fort was completed in 1834. It was a trading post from late 1833 – before the fort was completed – through 1849.

In 1849, William Bent became the sole owner of the fort, but the prosperity of Bent’s Old Fort was dwindling due to a decrease in trade and an increase in American Indian hostilities. Bent held the Army partially responsible for the decline of his business due to their presence at the fort before and during the Mexican-American War, which led to increased tensions with and between the neighboring American Indians. In response to the increased tensions, the US Army considered establishing a fort in the area at which time, Bent attempted to sell his fort to them but considered the Army’s offer too little recompense for his losses. Concurrently with his attempt to sell the fort to the Army, a major cholera epidemic attacked large groups of American Indians – including the Southern Cheyenne whom Bent considered his strongest ally in the region. When the epidemic passed, half of the Southern Cheyenne had died.

In August 1849 after sending his employees and family off with the remaining trade goods, Bent set fire to the adobe fort’s wooden substructure and rolled powder kegs into the main rooms of the fort in order to destroy it. Several conjectures exist as to why he would see the fort destroyed: 1) to deny the Army occupancy of the fort; 2) to prevent the Ute, Apache, Comanche, and Arapaho from using it in the fight against the US Army; and 3) in response to the cholera epidemic. Whatever the reason, he moved 38 miles down the Arkansas River to the Big Timbers. At the Big Timbers, Bent resumed trading with the local Indians. He built three log structures joined together to form a U with the open side facing the river. In the winter of 1852-1853, however, he built a more impressive fort of stone having 12 rooms around a central courtyard and 16-foot tall walls. He operated this smaller post from 1853 to 1860. Although he failed to sell Bent’s New Fort to the US Army, they did lease it for use as the Upper Arkansas Indian Agency and commissary and quartermaster storehouse for nearby Fort Wise (Fort Lyon).

Fort Lyon, first established as Fort Wise, was built less than one mile west of Bent’s New Fort by the Army in 1860. It was named for Henry Wise, Governor of Virginia; however, in 1861 the name was changed to Fort Lyon in honor of General Nathaniel Lyon, who was killed at the Battle of Wilson’s Creek in Missouri during the Civil War. Fort Wise/Old Fort Lyon served as an important military link on the Santa Fe Trail between Fort Leavenworth, Kansas and Fort Union in New Mexico, being the “principal guardian of the Mountain Branch.” It was deeply involved in the Indian troubles of this region during and after the Civil War. The 1861 Treaty with the Arapaho and Cheyenne was signed here, but it was not honored by either side. Due to its location in the Arkansas River floodplain and subsequent flooding, the fort was relocated to its present location east of Las Animas in 1867. New Fort Lyon was active from 1867 to 1889, being abandoned as a fort by an act of Congress in 1890. Beginning in 1867, New Fort Lyon served as part of the Army’s Department of the Missouri, a regional network of forts and military facilities in the Missouri River drainage. This post replaced Old Fort Lyon and helped guard the Santa Fe Trail and later the railroad line. 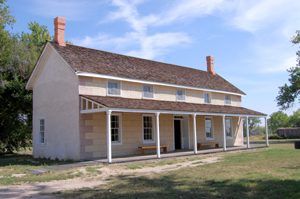 Approximately two miles south of Las Animas is the location of Boggsville, which is one of Colorado’s earliest extant agriculture and trade centers. This small complex of two trading stores, owned separately by John W. Prowers and Thomas O. Boggs, was a stage stop on the Santa Fe Trail. Boggsville was founded in 1862 on the west bank of the Purgatoire River, three miles from New Fort Lyon. It was built on 2040 acres of the original four million-acre 1843 Vigil & Saint Vrain, or Las Animas, Mexican Land Grant, comprising most of southeastern Colorado. Boggsville served as a center of commerce and agriculture between 1867 and 1873; it was also the first county seat of Bent County. Thomas and Rumalda (Luna) Boggs, John W. and Amache (Ochinee) Prowers, and Kit and Josepha (Jaramillo) Carson called Boggsville their home. Las Animas City was the first town established in southeastern Colorado and was located on the Arkansas River across from Fort Lyon. It served as the home station for the Barlow and Sanderson Stage Company and later became the county seat for Bent County. It was abandoned after 1873 when the Kansas Pacific Railroad built West Las Animas (present-day Las Animas).

The Mountain Route and its most important feature, Raton Pass, played a significant role in military history. Stephen Kearny’s Army of the West used this route in 1846 on its way to the conquest of New Mexico. Also, in 1862, Colorado Volunteers poured through Raton Pass on their way to Glorieta Pass, where they defeated troops of the Confederate Army. However, the pass was not widely used until “Uncle Dick” Wootton started improving it in 1865 as part of his toll road. The improvements continued to promote many travelers, including the operators of the stagecoach lines, to use to the Mountain Route instead of following the Cimarron Route.

The Mountain Route was a significant route of the Santa Fe Trail and continued to be a significant route for the railroad. Once called the Raton or Bent’s Fort Route during trail days, the Mountain Route was longer and more difficult than the Cimarron Route, but it was considered safer due to the abundance of water and lack of Indian attacks. Though the railroad boom led to the trail’s obsolescence as the wagon road to Santa Fe, it maintained – and produced a change in the character of overland trade along the trail. The development and implementation of the railroad network across the United States, particularly along the Santa Fe Trail, enabled freighters to ship larger and more frequent quantities of goods to and from the expanding territories, increasing profits and aiding in the settlement of these new territories.