Auraria’s partisans boasted of her antiquity, claiming that she was a city three or four weeks before Denver was even down on paper. The rivalry of these ragged little towns in the winter loneliness of the great plains may seem absurd to readers of this day and generation, but, it goes to prove that human nature is the same the world over, in all times and places.

Richens L. Wooton and family arrived in Auraria on Christmas day, 1858. Wooton brought a large stock of merchandise, most of which was contained in barrels. He wanted to make a favorable impression and become popular among his new associates, so he knocked in the head of a barrel and invited his callers to help themselves with tin cups. No method could have been more effective in attaining the desired end than the one he adopted. All Auraria promptly called. News of the unusual liquid refreshments spread like wildfire through the city of Denver, and the inhabitants of that town exhibited their characteristic energy by a lively dash across Cherry Creek. The rivalry and animosity between the two cities were forgotten, for that day at least. Before the night closed down, Richens Wooton was “Uncle Dick” to every man in both towns. He made that Christmas of 1858 a notable one in the annals of Auraria. 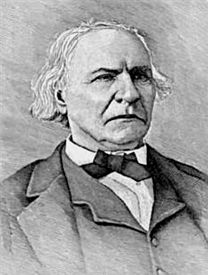 Richens Wooton soon began the erection of his famous business block. This was the most imposing and pretentious edifice in the town. It was a story and a half high, roofed with clapboards. The upper floor was made of boards sawed by hand with a whip-saw and was the first board floor laid in the country. This room was lighted by a four-light glass window, the only luxury of the kind in the city.

Auraria was named from Green Russell’s home town in Georgia, but as time went on and new people came in there were many theories in regard to the name. One man suggested that it was derived from Aurora, the Roman goddess of the dawn; another had a vague theory that it was a contortion of the word auriferous, to indicate the gold-yielding country around the town. Uncle Dick Wooton, in his book, gives the following:

“There must have been some classical scholars among the founders of the town because I am told that the name has a Latin origin, the word ‘aura’ meaning a gentle breeze. I suppose Auraria was intended to mean the town of gentle breezes, and it was a rather pretty and appropriate name.”

The pioneers at Montana City lost faith in the future of their town and moved, cabins and all, to or Auraria, leaving their townsite to revert to a state of nature.

The little band of pioneers camping beneath the cottonwoods on the banks of the South Platte River and Cherry Creek in 1858-’59 did not realize that they were laying the foundation of the great State of Colorado. From this little camp, the hardy, courageous prospectors scattered, climbed the foothills, scaled the mountains, penetrated the wild gorges, stuck pick and shovel into the granite and quartz rocks and washed the sands of streams. The winter was open and the spring came early. While some prospected, others were busy platting new towns. They placed on the map, Central City, Black Hawk, Idaho Springs, Georgetown, Golden, Boulder, Colorado City, Pueblo, and Canon City. The favorite pastime of the pioneers during the long winter day was writing letters to their friends in the east. These letters were filled with glowing accounts of the scenery and the richness of the land in gold, which as yet, they had seen with the eye of faith only.

It was optimism like that and faith in the future of the country that inspired the pioneers in the midst of a lonely wilderness, where the only home lights at night were their campfires and the campfires of the Indians, to lay the foundation of this great “city of lights.”

By Alice Polk Hill, Colorado Pioneers in Picture and Story, 1915

The foregoing article was excerpted from Chapter IV of Alice Polk Hill’s 1915 book, Colorado Pioneers in Picture and Story, published by Brock-Haffner Press in 1915. However, the text as it appears here, is not verbatim as it has been edited for clarity and ease of the modern reader. 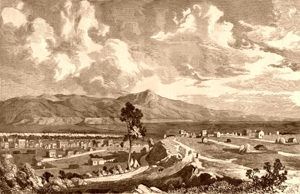 Denver City was a frontier town, with its economy based on servicing local miners with gambling, saloons, livestock and goods trading. In the early years, land parcels were often traded for grubstakes or gambled away by miners. In May 1859, Denver City residents donated 53 lots to the Leavenworth & Pike’s Peak Express in order to secure the region’s first overland wagon route. Offering daily service for passengers, mail, freight, and gold, the Express reached Denver on a trail that trimmed westward travel time from twelve days to six. In 1863, Western Union furthered Denver’s dominance of the region by choosing the city for its regional terminus.

Today, Denver is the largest city and the capital of Colorado. It is located in the South Platte River Valley on the western edge of the High Plains just east of the Front Range of the Rocky Mountains. The Denver downtown district is located immediately east of the confluence of Cherry Creek with the South Platte River, approximately 12 miles east of the foothills of the Rocky Mountains. Denver is nicknamed the Mile-High City because its official elevation is exactly one mile or 5,280 feet above sea level. Its estimated population today is about 620,000 people.

Discovery of the Rocky Mountains