Chillicothe, Ohio, the county seat of Ross County, is located along the Scioto River 45 miles south of Columbus. The city was the first and third capital of Ohio and is rich in history. 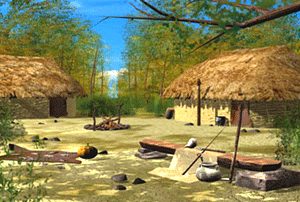 Long before white settlers arrived, the area was called home to prehistoric cultures and historic Native Americans. During the early years of settlement, numerous mounds and earthworks were built for ceremonial and burial purposes by the Adena and Hopewell cultures that dotted the landscape of the Scioto and Ohio River Valleys. The ancient Hopewell people, which flourished from 200 BC until 500 AD, had trade routes that extended to the Rocky Mountains.

Later, the Shawnee were the predominant tribe to inhabit the region. In 1758 a settlement was established at the site by the Shawnee who had been forced to abandon their village of Lower Shawneetown after being destroyed by floods. A group of Shawnee from Logstown also joined them. 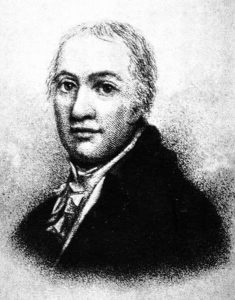 In 1793, Nathaniel Massie became the principal surveyor of the Virginia Military District, located between the Scioto and Little Miami Rivers. This district contained lands set aside by Virginia to be given to soldiers from the state that fought in the American Revolution. While surveying the Ohio Country between 1793 and 1795, Massie found the rich, fertile valley lying between the Scioto River and Paint Creek and claimed it as his own for a future townsite.

However, hostilities with the Indians made the interior region unsafe for settlement. It wasn’t until after the Battle of Fallen Timbers in 1794 and the Treaty of Greenville in 1795 that forced the Native Americans from most of Ohio that the area was safe for settlers. Between those two events, Massie and his surveying party fought the last battle against the Indians in the Scioto Valley at Reeves’ Crossing near Bainbridge.

Now that it was safe for settlers, Massie and a party of 39 men laid out the town of Chillicothe, with 456 lots, in the summer of 1796. He named it from a derivation of the Shawnee Indian word “Cha-la-gaw-tha,” which means town or gathering place. He then advertised town lots and lands he had surveyed for sale in Virginia and Kentucky newspapers. He also promised to give away the first 100 lots free to settlers. Before long, people were moving from Virginia and Kentucky west along the Ohio River. 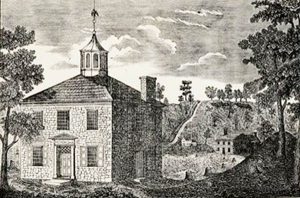 Congress also authorized the sale of the government-owned lands on the east side of the river. The town grew rapidly, becoming a center of political influence within the Northwest Territory. By late 1796, several taverns, stores, and artisan shops had been built.

In 1802 as Ohio was moving toward statehood, Chillicothe hosted the Ohio Constitutional Convention. In 1803 Congress approved the constitution, and Chillicothe became the state’s first capital on March 1, 1803. Chillicothe resident Edward Tiffm became Ohio’s first governor, while fellow Chillicothian Thomas Worthington served as one of the first two senators. 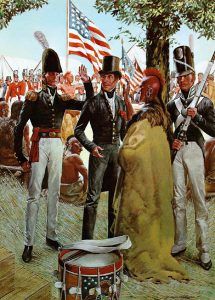 In 1810, the capital was moved to Zanesville as part of a state legislative compromise to get a bill passed. However, just two years later, in 1812, it was returned to Chillicothe. During the War of 1812, which was fought on Ohio’s borders, the city housed the 19th U.S. Regiment. As an “army town,” hundreds of soldiers were encamped in the vicinity. Following Commodore Oliver Hazard Perry’s defeat of the British fleet on Lake Erie on September 10, 1813, the 300 captured seamen were marched to Chillicothe for confinement. The captives were held in a stockade called Camp Bull north of town. During their confinement, they witnessed the execution by firing squad of six American soldiers found guilty of desertion. After spending ten months in the prison camp, the prisoners of war were marched back to Lake Erie to be exchanged.

In 1816, the capital was permanently moved north to Columbus to have it near the state’s geographic center, where it would be more accessible to most citizens. However, Chillicothe continued to grow and flourish after its years of political influence were over. It remained a busy economic center with agriculture as its primary economy and other industries, especially papermaking. 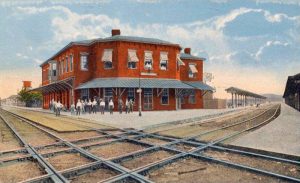 The Ohio-Erie Canal connected Chillicothe with other parts of the state in 1831, providing more opportunity for economic growth. Flourishing as a port town, mills and storage houses spring up along the canal banks.

In 1852, the Marietta and Cincinnati Railroad entered the town, providing more economic growth as agricultural and manufactured goods could easily be shipped. When the railroad acquired new owners, including the Cincinnati, Washington, &  Baltimore Railroad Company and the Baltimore & Ohio Railroad Company, Chillicothe residents acquired even more markets for their goods. 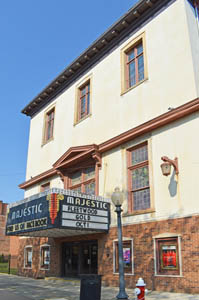 On April 1, 1852, a great fire destroyed more than a quarter of the town. The fire started in John Watts carpentry shop when wood shavings caught on fire, quickly engulfing the building in flames. With high winds, the fire quickly spread through the downtown area. By the end of the day, two city blocks of homes and businesses were in ashes. Many citizens lost their businesses, homes, and belongings. The area around the canal was rebuilt quickly, and eventually, the downtown area was also rebuilt, but it was years before the town’s economy completely recovered.

In 1853, the Masonic Hall opened as a combination lodge, theatre, and dance hall. Many years later, in 1915, it would be renamed the Majestic Theatre and began hosting live productions including Vaudeville acts, burlesque, minstrel shows, dramas, comedies, and even Buffalo Bill’s Wild West Show. Three years later, it began showing films. Continuing to operate today, featuring both films and live performances, it is America’s oldest continuously operating theater. 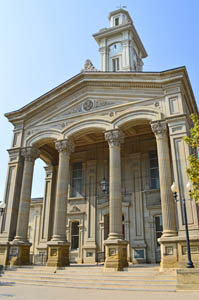 In 1858, a new county courthouse was built in the Greek Revival style at the cost of about $100,000. The historic building is still used today.

When the Civil War began in 1861, numerous young men from the county enlisted. The 73rd regiment was organized and trained at Chillicothe. Many of these brave men were honored as heroes, including five soldiers awarded the Congressional Medal of Honor. Brigadier General Joshua W. Sill, a West Point graduate, was killed at the Battle of Stones River on December 31, 1862. His friend General Philip Sheridan named Fort Sill in Oklahoma in his honor. Henry Walke, a career Navy man who rose to the rank of rear admiral, was said to have seen more naval action during the war than any other officer in the navy. While commanding the riverboat Carondolet, he successfully ended the Confederate’s blockade of the Mississippi River.

In 1890, the Mead Paper Company purchased a facility in Chillicothe, reinforcing the city’s importance as a paper production center. Though the paper-producing industry had begun in Chillicothe in 1810, the Mead Corporation was the largest. Mead merged with Westvaco in 2001 and has changed hands a couple of times since then, and is now the Pixelle paper mill and the town’s largest employer.

In 1907, the Ohio-Erie Canal was severely damaged by a flood that forced it to close. 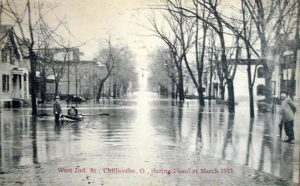 In March 1913, a great flood occurred in what is known as the greatest natural disaster in Ohio history. Although rivers in Ohio tended to flood every spring, heavy rains exacerbated the flood conditions. Once the floodwaters flushed downstream and out of Columbus, it produced minor damage until it reached Chillicothe and the confluence of the Paint Creek and the Scioto Rivers. Here, the water reached a record 37 feet putting most of the town underwater. At a water level of eight feet higher than ever known before, the most significant damage occurred in a residential section in the eastern part of town. Having a population of 15,000 at the time, Chillicothe suffered 18 casualties, 200 houses were destroyed, and over 500 people were left homeless.

On April 6, 1917, the United States declared war on Germany, entering World War I. That year Camp Sherman, an Army training base, was established in Chillicothe, temporarily increasing the population from 16,000 to 60,000. Construction began in June, and when it was completed, it comprised 2,000 buildings. Named for Civil War General William Tecumseh Sherman, the camp’s population caused a flurry of housing construction and the opening of new businesses. Two hundred German sailors were confined as prisoners of war at Camp Sherman from July 1918 until September 1919.

The Spanish influenza epidemic of 1918 reached Camp Sherman in September of that year. More than 8,000 soldiers and personnel were infected, and of those, nearly 1,200 died. Almost 2,000 cases were reported in the city, resulting in 31 deaths. 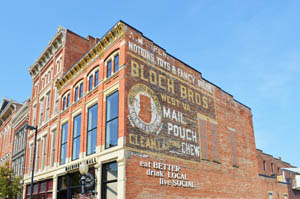 When the war ended, the camp temporarily functioned as a trades school to educate veterans to qualify for jobs. A veterans hospital was also established. During the 1920s, the United States government closed Camp Sherman and ultimately dismantled it. Today, none of the original buildings continue to exist. The land is now home to the Veterans Administration Medical Center, the Ross Correctional Institution, the Hopewell Culture National Historical Park, a wildlife refuge, and the Chillicothe Correctional Institution.

More industries moved into the city in the following years, including the Kenworth Truck Company, one of the leading employers today.

The town’s population peaked in 1960 at 24,957 and has remained relatively steady throughout the years, though it gradually declined to about 21,700 today.

As the only city in the county, Chillicothe remains a hub for economic activity, including hospitals, prisons, and a college campus that are among the largest employers. The Ross County economy also continues to rely on agriculture. 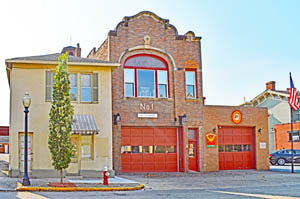