Early construction consisted of only box-like structures, which at the time were better than the canvas tents that Mrs. Johnson had been staying in. Later, after the concept plan was decided on, Death Valley Ranch began to take on some of its Spanish-Mediterranean design features.

Recognizing a good story, Scotty told everyone that he was building the two million dollar home with profits from his gold mine. When questioned by the droves of reporters who visited, Mr. Johnson agreed that Scotty owned the place, and simply said that he was “Scotty’s banker.” Construction was halted in 1931 when Mr. Johnson discovered that due to a surveying error, he was building his castle on federal land. The Great Depression was beginning to take hold and construction on the Castle was never restarted. Today the Castle remains as Albert left it – incomplete. 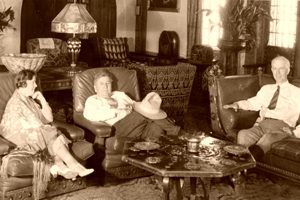 Towards the end of the Great Depression, the Johnson’s retired to Hollywood, California and often visited the Castle, which had become a popular hotel and tourist attraction due to the fame of Death Valley Scotty. Thousands of tourists, along with Hollywood movie stars and reporters from around the country, flocked to the Castle each year to see what they thought would be the dwelling of one of the world’s richest gold miners.

The Johnson’s died in the 1940s, and having no heirs, willed the Castle to a charitable organization called the Gospel Foundation of California. For various reasons, the Johnsons felt beneficent towards Scott, and in verbal agreements made specific provisions allowing Scott the right to live out the rest of his life at the castle. Walter Scott died in January of 1954 and was laid to rest on a hill overlooking the famous home that now bears his name.

In 1970, the Gospel Foundation sold the estate to the National Park Service, whose job is to protect and preserve the Castle for present and future generations to enjoy. Perhaps Death Valley Scotty had that in mind when he proclaimed: “The Hall of Fame is going up. We’re building a Castle that will last at least a thousand years. As long as there’s men on earth, likely, these walls will stand here.”