At some point, Johnson must have realized the financial promise these visitors had, for by 1934 tours were informally conducted of the Main House and Annex. By 1936, tour guides were hired and trained and an admission price of one dollar per person was instituted. Bessie, more so than Albert, administered these tours and was known to conduct a few herself.

“We are now employing about a dozen young men and women under a resident manager to act as guides and guards. The girls are dressed in pretty frocks and make the visitors feel comfortable. Visitors range from a few a day to as high as 130.”

To augment the income derived directly from tour admission charges, Johnson began to sell mementoes. Bessie had written a small anthology of stories about Walter Scott in 1932 entitled Death Valley Scotty by Mabel. In addition she prepared a written guidebook for the tour of the Main House and Annex. It was intended to serve two separate functions; first as a training manual for the many employees hired as guides and second as a keepsake for the paying public. Several sketches of the “Castle” by M. Roy Thompson were included to illustrate the text. In 1941, Johnson had 10,000 guidebooks privately published, under the business name of the Castle Publishing Company, and made them available for sale to the public as souvenirs. Afterwards, Johnson stated:

“We placed the books on sale the middle of this month [October, 1941] so have had only five days experience and not very many people going through the castle as yet but have averaged ten books a day. We are selling them at $1.00 each so it looks as though we would sell at least 1/2 of the 10,000 by the first of May.”

Although plans to publish Bessie’s anthology of anecdotes about Scott and her life in the desert were set they never materialized, probably because of the intervening events of the Japanese attack on Pearl Harbor the month following the first selling of the other pamphlet.

Albert Johnson also envisioned the potential financial value in postcards and hired professional photographer, Burton Frasher, to take dozens of large-format photographs. Frasher, working along with son Burton Jr., specialized in publishing postcards and often stayed at the Ranch taking photographs of the buildings and grounds, as well as the scenery of the surrounding area. Hundreds of photographs of the Ranch were taken and thousands of postcards were produced and sold. Many of Frasher’s postcards are still printed and available for purchase in the gift shop at Scotty’s Castle today.

Though attracting tourists to the Castle was becoming a success, Albert’s world would soon be turned upside down when, in 1943, his wife Bessie was killed in a car accident. The event occurred when he and Bessie were going over a mountain pass some 40 miles south of the Ranch when Albert lost control the car. Bessie was killed instantly. His sorrow over the loss of his wife and life-long companion, combined with Johnson’s deteriorating health, made it increasingly difficult for Albert to visit and properly maintain the property. Making matters worse, gasoline and tires were strictly rationed during World War II, which severely diminished public visitation to the Ranch. Resulting in a substantial loss in income, this served to make the costs of continued maintenance even more difficult to meet.

In 1946 Johnson established a charity called the Gospel Foundation. The charity was organized in order to manage Johnson’s estate and to undertake certain social betterment functions. In 1947, Johnson inserted a provision in his will that all his land holdings would fall to the Foundation once he died. Johnson transferred several properties to the foundation in his will. Besides the Death Valley Ranch, they would gain control of the Shadelands Ranch and the Hollywood home. Johnson died on January 7, 1948. One more provision in Albert Johnson’s will called for his friend Walter Scott to be taken care of by the Gospel Foundation after his passing and that he be allowed to stay on at the ranch until his death. Walter Scott died in 1954 and was buried on the hill overlooking Scotty’s Castle next to a beloved dog.

The house in Hollywood was used as an office and headquarters. The hundreds of acres surrounding the house at Shadelands was slowly sold off, parcel by parcel. Death Valley Ranch had already been established as a motel and tourist site and the foundation continued to run it as such. The shed was renamed the “Rancho” and the Guest House was renamed the “Hacienda.” The Gospel Foundation divided the latter into four separate rooms and rented these out as well. The suites in the Castle itself were available for rent, and of course, went for premium prices: $13 a night with breakfast. At some point, the administration found they needed employee housing more than they did motel rooms and they reconverted the “Rancho” for just that purpose.

Despite the apparent success of the tours and lodging facilities, the Foundation wished to divest itself of ownership of the Castle. In 1970 the Foundation found an interested buyer in its neighbor — the National Park Service. The very same year the Foundation also donated Shadelands to the city of Walnut Creek for use as a historic house museum. It seems these divestitures proved very beneficial for the foundation, which was awarded tax-exempt status once they no longer owned these properties. The National Park Service purchased the Castle and its lands for $850,000. By 1972, Scotty’s Castle was officially incorporated into Death Valley National Monument. The foundation still awards a total of $400,000 a year in grants to needy socially-oriented causes.

Today Albert and Bessie Johnson’s Death Valley Ranch is known as Scotty’s Castle. Located in Death Valley National Park, guests can no longer rent a room for the night, but visitors can still view the house and grounds. There is no charge for viewing and the Upper Ranch grounds; however, this is an admission fee to tour the castle.

Special note: The National Park Service shows Scotty’s Castle as “closed” until 2020 due to flood damage. See their website HERE 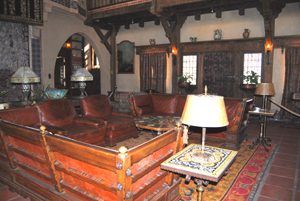