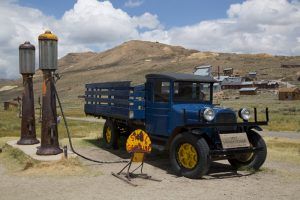 My name is Valerie. I am located in Long Beach, California and I visited Bodie the summer of 2001. The town was one of the most memorable landscapes I have ever laid my eyes upon. Near the Standard Mill, there was a shack with a really old washer and these feminine items surrounding it. When I peeped through the window I banged my head on a nail. So at the time, I thought hmm… how nice would be to have a souvenir? I then put the nail in my pocket and went on with the tour. I looked at your website and noticed your legends section and well … I believe I’m cursed. The problem is I really wouldn’t mind going the distance to place the nail back. I remember feeling bad about taking it more than a few times but that was over 5 years ago and through all my moving around and college transfers I simply lost the nail. So, I was just wondering what you think I should do… Valerie, May 2006

We think maybe Valerie should contact the park rangers with an apology in order to relieve herself of the “curse.” What do you think?

Carissa Gardner of Nevada wrote us in August 2013. She writes:

On Aug 5th my family and I visited Bodie I had always wanted to see it, I pleaded with my hubby who likes old stuff plz do not take ANYTHING, just in case that Bodie curse was real I did not want to put myself in that position or allow something like that in my home. We went to Bodie it was wonderful to see and we had a great time spent 4 hours there ate lunch had fun.

When we arrived home my husband had a purple piece of glass a blue and a green and a few other glass pieces I was like why did you do that. I was mad but just let it go because I am not that superstitious. The next day Aug 6th my back started hurting me very bad I went to the doc and he said I had a disc slightly outta line prescribed me a valium so I would have a good sleep so that he could give me an adjustment the next day, I took the Valium that night (never had taken Valium b4) and I was restless did not sleep all night and woke up with a pounding headache my eyes hurt so bad and my back was even worse, I asked my hubby to stay home from work and take me to the hospital where they gave me a shot Demerol for pain in my butt and told me I had a real bad sinus infection after the E.R. I went to my doctor for my back adjustment and told him about the Valium he told me 1 in 2000 people have the opposite reaction to what Valium is supposed to do and that he will note in my chart no Valium He decided not to mess with my back because I was in so much pain I was wearing sunglasses inside because of my eyes hurt so bad. So the rest of the day Aug 6 and 7th,8th and 9th I was in bed sick and sore.

On Aug 10th we went to a Reno Aces game in Reno Nv with our kids we stayed half the game because it was very hot so we went home early to go swimming when we got we were getting our suits on and while doing this my 6-year-old son grabbed my oldest sons epi-pen while playing with it he accidentally shot it thru his finger right thru one end to the other so we headed to the hospital again, my son was ok but if the epi-pen had not gone all the way thru he would have lost his finger. (so a lil good luck there). 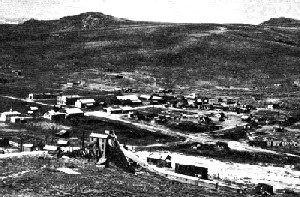 The next two days were ok just cleaning and preparing for my best friend to come visit and preparation to make a baby shower cake for another friend, I told my husband see you should have not taken that glass I was going to take it back on Aug 6th but got sick then was going to send it back on the way to the pool on the 10th but just could not get to the Post Office. Well the bad luck did not end yet on Aug 14th my back was still pretty painful but I went about cleaning and getting stuff ready for my friends visit everything was pretty normal we cleaned did yard work when my daughter stepped on a red ant ( no big deal) still went on with our day and that evening my kids were in the back yard playing and climbing the tree when my daughter comes running in screaming that she hurt her arm, I asked what had happened she said she was climbing the tree and fell, right then I knew she broke her arm rushed her to the E.R. they did not think she broke it just bruised ( but I already knew after the week we had that it was) they took X-Rays and the Doc comes back and says well you actually did break it so she is currently in a sling for 5 more weeks with a broken/fractured humerus.

That was it for me the next morning I got that glass picked it up with a paper towel (did not want to touch it) stuck it in an envelope called Bodie got the address and as soon as the Post Office opened took it down and sent it back that was on Aug 15th. Things were a lil cruddy on the 16th my anxiety was high I finished getting stuff ready for my friend she came we went out came home and worked on the baby shower cake we had problem after problem with that cake and we were up till 3:30am (I believe that was the last residual of our curse) everything has been fine since.

It may have been just a coincidence my husband thinks so but we never know I told him cause he took the glass if he had not taken it maybe these things would have still happened but like I said we will never know, So I recommend do not take any rocks, glass, trinkets from Bodie this is from experience its just not a good idea I still highly recommend to go visit Bodie because it is great, not scary or anything, we do plan to go back ( I told my husband he cannot come because I don’t trust him lol). We did collect a black and orange feather a bird feather not a Bodie feather from there and flowers growing around, they are here in my home no problems with those but stuff connected to Bodie that may have history leave it there it was a scary 2 weeks and we were miserable. Just leave the stuff be and enjoy the sights at Bodie.”

Editor’s Note:  After we published Carissa’s experience, producers for a show on the Weather Channel read it and reached out to include her on an episode of “Meet the Legend: Curse of Bodie State Park” originally airing November 2, 2014. 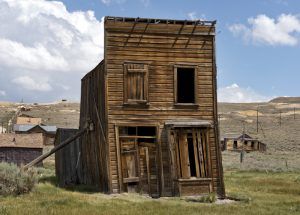 The old Swazey Hotel in Bodie, California by Carol Highsmith.

I now believe in the Bodie curse. I actually didn’t know there was a curse, just read signs asking not to take anything away from Bodie. My husband and I found a couple of old-fashion square nails, broken pieces of colored glass and some pieces of old dishware. I also took home a piece of linoleum from the one house that is open to the public. It wasn’t long after our October 21st visit that the bad luck started. I wrenched my knee just getting up from a sitting position. My knee was so swollen I had to ride an ambulance to emergency. The doctor extracted 37 cc’s of blood and now I have to undergo tests. A few days ago I broke a tooth and then yesterday I broke my entire bridgework. The dentist told me “no-one” ever breaks the metal base of the bridge. I watched the Weather Channel’s program about the Bodie curse and finally realized what was happening. I have already packaged the pieces from Bodie and will mail them to the Rangers tonight!

If you have an experience regarding the Bodie Curse, we would love to hear about it. Send us an Email HERE!