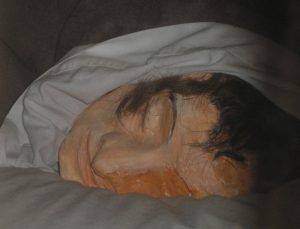 One of the heads used in the escape of the Anglin brothers and Frank Morris is still on display in a cell, by Kathy Weiser-Alexander.

The three escapees, along with another man by the name of Alan (Clayton) West, made plaster heads with real hair swept from the barbershop floor. On the night of the escape, they left the heads on their beds and crept through the ventilators in their cells, which had been widened with stolen spoons from the kitchen, into the utility corridor. West could not fit through his hole and remained behind. From there, they made their way to the roof, then down to the water’s edge. Though prison authorities believed the men had drowned, no bodies were ever recovered.

During the last escape from Alcatraz on December 12, 1962, John Paul Scott, 35-years old, swam from the island to Fort Point, under the southern part of the Golden Gate Bridge, proving that it could be done. Along with another prisoner named Darl Parker, the pair bent the bars of a kitchen window in the cell house basement and escaped.

Parker was discovered on a small outcropping of rock a short distance from the island. However, Scott, a better swimmer, made it to Fort Point beneath the Golden Gate Bridge. Collapsing from exhaustion and hypothermia, he was soon found by two teenage boys who called for help. He was then taken to the military hospital at the Presidio Army base. After being treated for shock and hypothermia, he was returned to Alcatraz. 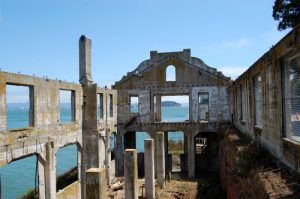 The old Officers’ Club was burned out during the Indian occupation of the island, by Kathy Weiser-Alexander.

Primarily due to rising costs, its isolated location, and deteriorating facilities, Alcatraz was the most expensive of any state or federal institution. At this same time, prison operating philosophy was changing to reinstitution and rehabilitation, rather than the wholesale warehousing of inmates. The government soon began to build a new prison at Marion, Illinois, with plans to shut down Alcatraz. Though it was said that J. Edgar Hoover was opposed to closing Alcatraz, his power base had eroded over the years and his opinion was ignored.

Attorney General Robert Kennedy officially closed the doors of Alcatraz on March 21, 1963, when the final 27 inmates were taken off the island.

It was the first time that reporters were ever allowed on the “Rock” to cover its closing which made headlines across the country. Afterward, Alcatraz Island was transferred to the General Services Administration in May of 1963.

During its 29 years of its operation as a federal prison, the fog-enshrouded island confined more than 1,500 men under intolerable rules and deprivation. Former prisoners continue to tell tales of the “inside” with numerous scenes that were seemingly so terrible, that many of the prisoners preferred death to continued incarceration.

Just as Warden Johnston had envisioned it, life was hell for the prisoners on the island, and in no time it was dubbed “Hellcatraz.” Suicides and murders were common under the severe and stark rule system of the prison. Infractions of the rules would quickly land a prisoner in “D” block, known as the “treatment unit.” Here, men could leave their four-by-eight cells only once in seven days for a brief, ten-minute shower. Harsher punishments included solitary confinement, in total darkness, for days without any release, or confinement in the dreaded steel boxes.

As prisoners looked out the barred windows of the prison, they saw party barges passing by, cars traveling on the highways of the mainland, and life going on normally for those not encased upon the Rock. One prisoner described it this way: “I looked out the window once when I first came to Alcatraz and saw that and I vowed to never look out the window again for as long as I was there.”

During the years that the island was occupied by the prison, eight prisoners were murdered by other inmates, five committed suicide, 15 died from illness, and numerous others went insane.

From 1963 to 1969, the island remained abandoned, with the exception of a short Native American occupation in 1964. Lasting for only four hours, the symbolic occupation was led by Richard McKenzie, with four other Sioux Indians, who demanded the use of the island for a Native American Cultural Center and Indians University.

Though viewed as insignificant at the time, these sentiments would later resurface. In the meantime, several other parties lobbied for various development ideas, ranging from a West Coast version of the Statue of Liberty to shopping centers, and resort complexes.

In 1969, Alcatraz Island again made national news when another group of Native Americans claimed the island as Indian land. 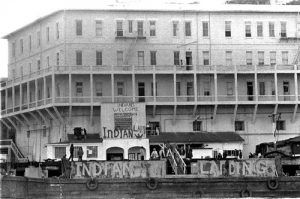 The dock at Alcatraz welcomes Native Americans after it was occupied. Photo by Michelle Vignes, courtesy California State University

On November 9, 1969, Richard Oakes, a Mohawk Indians and group of supporters set out on a chartered boat to symbolically claim Alcatraz Island for the Native Americans. The demands of the occupation were almost identical to those made in 1964 by the Sioux who had claimed the island.

Just a little more than ten days later, on November 20th, the symbolic occupation turned into a full-scale occupation that would last for the next 19 months.

The initial occupation, planned by Richard Oakes, included a group of Indians students, as well as urban Indians from the Bay Area. Since so many different tribes were represented by the Native Americans, the name “Indians of All Tribes” was adopted for the group.

The federal government initially insisted that the Indians leave the island and placed an ineffective barricade around it. However, the government eventually agreed to hear their demands and the group realized that prolonged occupation was possible. Oakes soon recruited eighty more Indian students from UCLA and the group of occupants reached some 100 Native Americans.

In no time, the occupants began to organize with Chief Oaks as the unofficial mayor of Alcatraz, electing a council, and providing for security, sanitation, day-care, school, and housing. Their negotiations demanded the deed to the island, and establishment of an Indian University, cultural center, and museum. 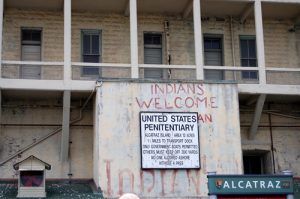 There are still signs of the Native American occupation at Alcatraz today, by Kathy Weiser-Alexander.

Though initially, government negotiators insisted that the occupiers could have none of these and insisted that the Indians leave the island, the government soon adopted a position of non-interference. This position was taken largely due to the strong public support of the Native Americans and their demands. Advocates from show business celebrities to the Hell’s Angels supported the Indian occupation and federal officials began to meet with the Native Americans.

Often sitting cross-legged on blankets inside the old mess-hall, the Indians and officials discussed the social needs of the Native Americans.

While it appeared to the Indian occupants, that their demand might actually be met, the government was, in fact, playing a waiting game, hoping that public support would wane and the Indians would voluntarily end the occupation.

At one point, the government offered a portion of Fort Miley in San Francisco, as an alternative site to Alcatraz. But, by this time, the Indians were too dedicated to their cause, refusing any alternatives.