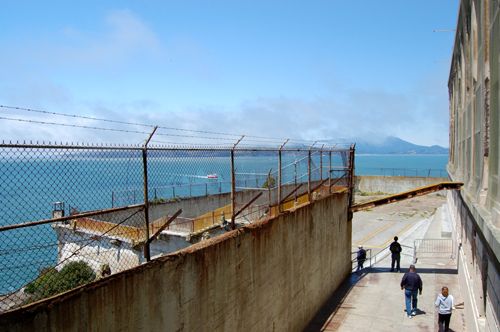 During Capone’s sentence on the “Rock”, he would make several other attempts to con Johnston into allowing him special privileges, but all would be denied. Capone spent 4 ½ years at the “Rock” holding a variety of menial jobs at the prison. While he was there he spent eight days in isolation as a result of a fight with another inmate and was stabbed with a pair of scissors by another prisoner.

Eventually, he began to suffer symptoms of syphilis that he had contracted years earlier, and actually spent more time in the hospital than he did in the cell house. In 1938, he was transferred to Terminal Island Prison in Southern California to serve out the remainder of his sentence. He was released in November of 1939, settled in Miami and died in 1947, at the age of 48.

Arriving on the second “official” shipment to Alcatraz in September was George “Machine Gun” Kelly. First involved in bootlegging, he was sentenced to Leavenworth where he spent three years. Obviously not rehabilitated, he resumed a life of crime, this time robbing banks. He soon advanced to kidnapping and in 1933, he held for ransom a wealthy Oklahoma oil magnate. After his capture, he was given a life sentence and returned to Leavenworth. However, within months he was transferred to Alcatraz, where he was said to have been a model prisoner for the next seventeen years. When Kelly suffered a mild heart attack he was returned to Leavenworth in 1951 and was paroled in 1954. Within months, he suffered another heart attack and died at the age of 59.

As part of its maximum-security efforts, the ratio of guards to prisoners was one to three, compared to other prisons, where the ratio averaged one to twelve. In addition, inmates were allowed no visitors for the first three months, and afterward, were only allowed one visitor per month, a privilege that had to be earned. While prisoners were allowed limited access to the prison library, no newspapers, unapproved books, or radios were allowed. All incoming and outgoing mail was screened, censored, and retyped. Consideration for work assignments was based on a prisoner’s conduct record. Each prisoner was assigned a private cell with only the basic minimum necessities such as food, water, and clothing. 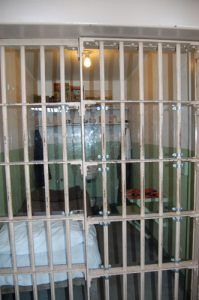 A cell in Alcatraz, by Kathy Weiser-Alexander.

The routine was the same every day, with prisoners awakened at 6:30 a.m., given time to tidy their cells and wash up, then marched silently to the mess hall. Following breakfast, the prisoners were then given their work assignments for the day, and after dinner, were again locked within their cells. The strict rules required inmate counts every half hour.

However, the worst rule was Warden Johnston’s strictly enforced silence policy. Many of the inmates considered this to be their most unbearable punishment. Prisoners were only allowed to talk during meals, in the yard on Saturdays, and for three minutes during a morning and afternoon work break. Though the silence policy was later relaxed, there were several reports that inmates were driven insane by the severe rule of silence.

Many stories, including the classic movie “Escape From Alcatraz” tell of an inmate by the name of Rufe Persful, a former gangster and bank robber, who went so far as to take a hatchet and chop off the fingers of one of his hands while working in one of the shops. Though the strict rule, no doubt, did drive men insane, Persful actually lost his fingers when a shop door blew shut on his hand.

The routine was unyielding, day after day, year after year. As quickly as privileges were earned they could be revoked for the slightest infraction of the rules.

The only “redeeming” qualities of the prison were the private cells and quality of food served at the prison. These too had their reasons. The first was to further isolate these hardened criminals, while the second was to prevent riots that were often known to start in other prisons because of the poor quality of food. 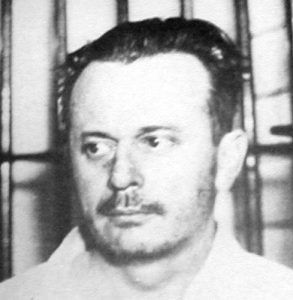 Though the vast majority of Alcatraz prisoners were never seen on a wanted poster, other notorious criminals held at the prison over the years included two members of the Ma Barker Gang – Arthur “Doc” Barker, the last surviving son, and Alvin “Creepy” Karpis, who was in a partnership with Ma Barker.

Other notorious criminals included Robert “Birdman of Alcatraz” Stroud, and Floyd Hamilton, a gang member and driver for Bonnie and Clyde.

While members of Ma Barker’s gang of hoodlums, Doc Barker and Alvin “Creepy” Karpis, terrorized the Midwest between 1931 and 1936. Their many crimes included murder, bank robbery, kidnapping, and train robbery. Karpis’ flamboyant style had earned him the wrath of J. Edgar Hoover and soon found himself with the infamous distinction of being “Public Enemy No. 1.”

Doc Barker was arrested in January 1935 and later sent to Alcatraz from Leavenworth. He was killed in an escape attempt from Alcatraz in 1939. Carpis, who was arrested in New Orleans in May 1936, found himself in Alcatraz just a few months later. He spent the next 26 years on the “Rock” before being transferred to McNeil Island in April 1962. In 1969, he was released and deported to his homeland of Canada. Carpis died in 1979. 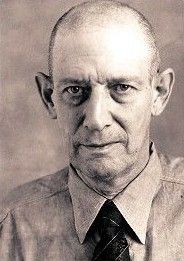 Robert Stroud, the Birdman Of Alcatraz.

Robert Stroud, known as the Birdman of Alcatraz, received very little notoriety until he gained attention in the 1962 movie “The Birdman of Alcatraz.” Stroud, who was convicted of manslaughter in 1909, was initially sent to McNeil Island to serve a 12-year sentence. While there, he was difficult to manage and after attacking an orderly, he was sent to Leavenworth. After less than four years at the Kansas prison, he killed a guard and was later sentenced to hang. After his mother appealed to President Wilson, the sentence was commuted to life.  It was during Stroud’s thirty years as a prisoner at Leavenworth that he began to study birds, which gained him international attention. When Stroud began to openly violate prison rules to continue his birding experiments and communications with bird breeders, he was sent to Alcatraz in 1942, where he never again was permitted to continue his avian studies.

The “Birdman” occupied a cell in D Block for approximately six years, before he was moved to the prison hospital in 1948, for the purpose of segregating him from the rest of the population. After he genuinely became ill, he was transferred to a Federal Medical Facility in Springfield, Missouri in 1959. Four years later, Stroud died of natural causes.

Though the prison was heavily fortified and it was assumed that the “treacherous waters” of the San Francisco Bay would prevent any escape, several attempts were made throughout the years.

From a total of 1,545 prisoners that spent time at the federal prison, 36 men attempted to escape in fourteen 14 separate attempts. Of those, 20 were captured, seven were shot and killed, two drowned, and five were never found, assumed by prison authorities to have drowned.

Theodore Cole and Ralph Roe were the first to disappear from Alcatraz on December 16, 1937. While working in one of the workshops, Cole and Roe had, over a period of time, filed their way through the flat iron bars on a window. After climbing through the window, they made their way to the water’s edge and disappeared into San Francisco Bay. Prison authorities declared them to have drowned but four years later, a San Francisco Chronicle reporter reported the men were alive and well in South America. 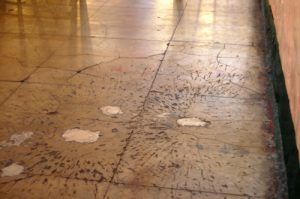 Scars from the “Battle of Alcatraz” can still be seen on the floor, by Kathy Weiser-Alexander.

The bloodiest escape attempt occurred over a three day period on May 2-4, 1946. In this incident, known as the “Battle of Alcatraz,” six men by the names of Bernard Coy, Joseph Cretzer, Sam Shockley, Clarence Carnes, Marvin Hubbard, and Miran Thompson, took control of the cell house. Overpowering officers and gaining access to weapons and keys, they planned to escape through the recreation yard door. However, when they found they didn’t have the key to the outside door, they decided to fight rather than giving up. During the next couple of days, the prisoners killed two of the guards they had taken hostage. Eventually, Shockley, Thompson, and Carnes returned to their cells, but Coy, Cretzer, and Hubbard continued to fight.

The U.S. Marines were eventually called out to assist and the escape attempt ended. In the melee, Coy, Cretzer, and Hubbard were killed, and 17 guards and one prisoner were wounded. Shockley, Thompson, and Carnes later stood trial for the death of the officers; Shockley and Thompson received the death penalty and were executed in the gas chamber at San Quentin in December 1948. Carnes, just 19 years old at the time, received a second life sentence.

On July 11, 1962, Clarence Anglin, his brother John, and Frank Morris also disappeared from Alcatraz. Their escape was made famous by Clint Eastwood’s movie, “Escape From Alcatraz.”