The 469-mile scenic parkway makes its way through the Appalachian Mountains of Virginia and North Carolina where visitors can see historically significant examples of 19th and 20th-century lifeways, architecture, and industry associated with the people and communities along its path.

The idea for the Blue Ridge Parkway was born in the Great Depression-era when President Franklin Delano Roosevelt visited the newly constructed Skyline Drive in Virginia in 1933. As part of his ambitious “New Deal” program, Roosevelt convened the governors of Virginia, North Carolina, and Tennessee and asked that a planning team be created. On November 24, 1933, Interior Secretary Harold Ickes approved this “park-to-park” highway as a public works project. Though the nation was experiencing great economic turmoil, automobile ownership was on the increase. Further, the project would create thousands of jobs in the region.

Congress allocated funds for the initial construction of the Blue Ridge Parkway on June 16, 1933, under the authority of the National Industrial Recovery Act. With a budget of $16 million, Ickes hired Stanley Abbott, a New York landscape architect, to oversee the project, and Abbott’s vision of a chain of parks and recreational areas began to take shape.

The parkway was envisioned as the first elongated national park providing automobile travelers access to some of the most spectacular natural scenery in the United States, as well as architectural details that provided variety and charm. Its planned landscape was designed down to the smallest details, as landscape architects and engineers worked together for decades to complete the project. Due to land-ownership constraints, it was 30 years before the Parkway road was completed across the Pisgah Range in North Carolina. 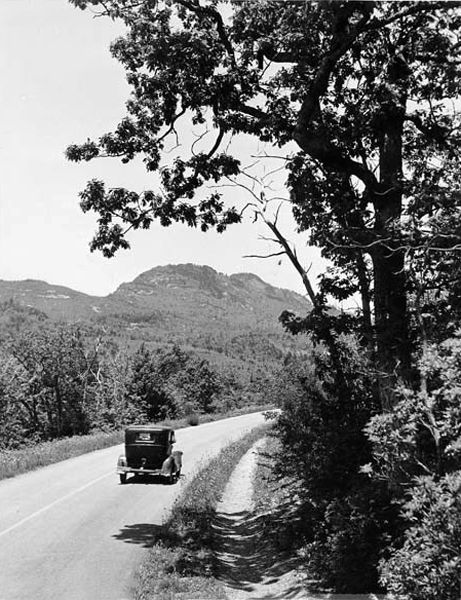 Most of the construction was done by private contractors, but a variety of New Deal public works programs were also employed, including the Works Progress Administration (WPA), the Emergency Relief Administration (ERA), and the Civilian Conservation Corps (CCC). When World War II began, approximately 170 miles were open to travel and another 160 miles were under construction. By the early 1950s, only half of the Blue Ridge Parkway was completed.

In the mid-1950s, the National Park Service launched a ten-year development program, called Mission 66, to mark the 50th anniversary of the agency’s creation. The plan included an accelerated effort to complete the construction of the Parkway by 1966. This initiative was very successful, finishing all of the Parkway’s construction with the exception of 7.7 miles at Grandfather Mountain, North Carolina.

After years of negotiating, the revolutionary Linn Cove Viaduct was constructed to protect the mountain’s terrain and Blue Ridge Parkway’s continuous 469-mile route was finally completed in 1987. 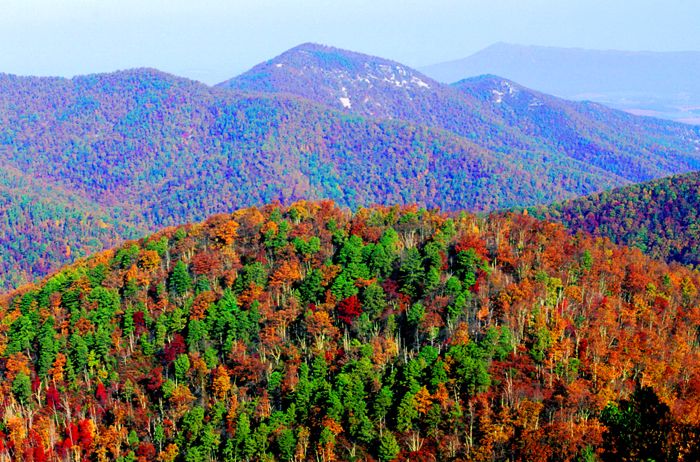 Often called “America’s Favorite Drive,” Blue Ridge Parkway was the first national rural parkway to be conceived, designed, and constructed for a leisurely driving experience. The pathway for recreational driving was and continues to be free from commercial traffic or stop signs.

The parkway is the highest and longest continuous motor road in the Appalachian region. It encompasses elevations from approximately 600 feet at James River in Virginia to 6,411 feet at Richland Balsam summit in North Carolina. Along the way, visitors enjoy the spectacular scenery of five major mountain ranges, wildlife, diverse outdoor recreational opportunities, and the history and heritage of the people and communities of the central and southern Appalachians.

There are entrances and exits to and from the parkway at all major federal and state highways.

Once on the parkway, the maximum speed limit is 45 miles per hour and is often less than that. There are no gas stations along the Parkway, but several are located just off the Parkway at access points. Roanoke, Virginia and Asheville and Boone, North Carolina are the largest cities along the way. 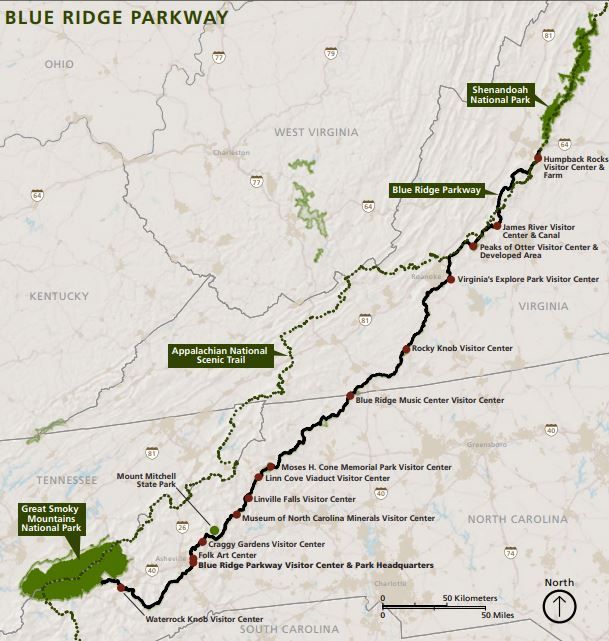 Though there are numerous sites to see along this scenic route, some of these include: 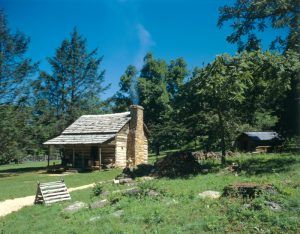 Humpback Rocks – Milepost 5.8 – At the Parkway’s north end is a scenic hardwood forest and sweeping valley vistas. Humpback Rocks illustrates the blend of cultural and natural features that define the rest of the Parkway. Visitors can hike to high rock outcroppings or explore the 1890s farm buildings relocated during Parkway construction. This site also includes a visitor center with a museum and a picnic area.

James River – Milepost 63.7 – Travel through the James River Gorge has evolved from foot, to boat, to rail, to today’s modern highway road system. Stop at the visitor center to discover why Virginians built a canal system rather than simply float on the unimproved James River, and why a railroad would buy an entire canal system. This area includes a visitor center, hiking trails, and a picnic area. 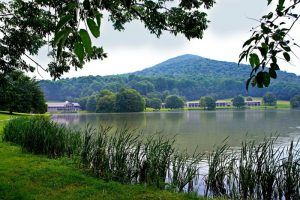 Peaks of Otter – Milepost 85.6 – Visitors to Peaks of Otter follow a long-standing tradition of tourism. Starting in the 1800s, the surrounding community opened their homes and lodges to guests hoping to relax and rejuvenate in the mountains. Modern visitors can stay the night at historic Peaks of Otter Lodge, explore the visitor center, visit Johnson Farm, hike one of the area trails, or fish in Abbott Lake. Polly Wood’s Ordinary, or early tavern, served as the area’s first lodging facility in the 1830s. 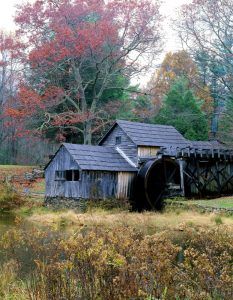 Mabry Mill – Milepost 176 – The sights and sounds of Rural Appalachia fill the air at Mabry Mill during summer and fall. Ed Mabry built the mill where he and his wife Lizzy ground corn, sawed lumber and did blacksmithing for three decades. The old mill, cultural demonstrations, and a decades-long tradition of Sunday afternoon music and dancing continue to draw visitors today. Take a break from driving with a short walk by the mill or some country fare at the restaurant. Mabry’s Mill is open seasonally and cultural demonstrations occur Thursday-Monday from 10:00 a.m. to 5:00 p.m. in summer and early fall. Free mountain music concerts are held on Sunday afternoons in the summer and fall. Matthew’s Cabin, which is not one of the original Mabry buildings, but was relocated from an area close by adds to the area’s picturesque and historic nature.

Blue Ridge Music Center – Milepost 213 – Music is a natural part of the Appalachian Mountains, and nowhere is that heritage felt more strongly than at the Blue Ridge Music Center. People here have kept alive and created some of the richest traditions of folk music and dance in our nation. Enjoy live music daily in the breezeway or at a weekend concert in the summer or fall. The Music Center is also at the crossroads of two music heritage routes: Virginia’s The Crooked Road and the Blue Ridge Music Trails of North Carolina. At the visitor center and museum are exhibits that trace the diversity of American music roots to the region. Hiking trails are also available. 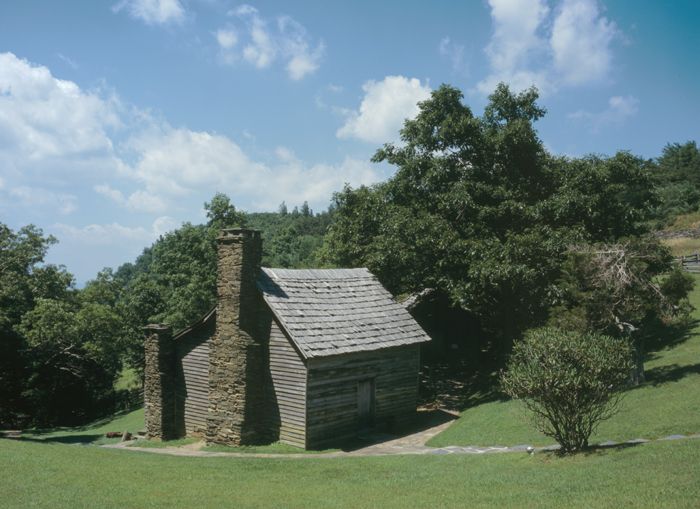 Doughton Park – Milepost 238 – Appalachian history comes to life among the ridgetop meadows and steep mountainsides of Doughton Park. Hike some of the 30 miles of trails here or visit Brinegar Cabin, a well-preserved piece of early mountain life. The site also features a visitor center, hiking trails, a campground, and a picnic area. 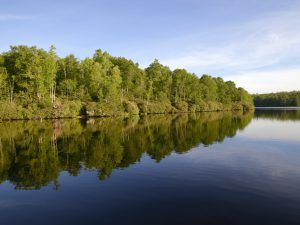 Julian Price Park – Milepost 297 – Julian Price Memorial Park is named after its former owner, insurance giant Julian Price. Price bought the 4,200 acres as a recreational retreat for his employees. After his untimely death in 1946, his heirs donated the land to the Parkway as a memorial. Now, Price Park is a popular Parkway destination, with plenty of opportunities to hike, fish canoe, camp, and picnic.

Linn Cove Viaduct – Milepost 304 – To protect the fragile habitat of Grandfather Mountain, Parkway planners designed the Linn Cove Viaduct. This award-winning complex concrete bridge is a symbol of pride to landscape architects and engineers for its marriage of beauty with utility and habitat protection. Visitors here will gain an appreciation for the care that was taken in the construction of the entire Parkway. The site also includes a visitor center and hiking trails 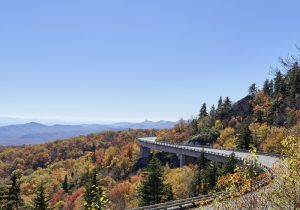 Linville Falls – Milepost 316 – The Linville River flows from its headwaters high on the steep slopes of Grandfather Mountain and cascades through two falls as it begins a nearly 2,000-foot descent through this rugged and spectacularly beautiful gorge. Known by the Cherokee as “the river of many cliffs,” Linville Gorge was the nation’s first officially designated wilderness area. Towering hemlocks, dense stands of rhododendron, and native wildflowers grow along the trails that begin at the visitor center and encircle the falls. The site also includes a visitor center, hiking trails, a campground, and picnic area. 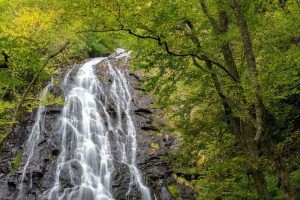 Crabtree Falls – Milepost 339.5 – Whether your visit is a local day trip or part of an extended Parkway tour, the Crabtree Falls area is a welcome place to relax. Spend a night under the stars, hike to incredible Crabtree Falls, or just stop by for lunch at the picnic area.

Craggy Gardens – Milepost 364 – Step into a different world at Craggy Gardens, where gnarled, twisted trees, fog, and wind make this part of the Parkway like no other. Visitors flock to the area for the overabundance of rhododendron and the 360-degree views. The site also features a visitor center, hiking trails, and a picnic area.

Folk Art Center – Milepost 382 – Discover Appalachian arts and crafts at the Folk Art Center near Asheville, North Carolina. In season, daily craft demonstrations give Carolina the chance to see folk art being made and to talk to the craftsmen as they work. Year-round, visitors can wander through the modern folk art gallery. Nearby are hiking trails.

Mount Pisgah – Milepost 408 – Mount Pisgah has the only lodge on the Parkway in North Carolina. The site also features hiking trails, a campground, picnic area, a restaurant, gift shop, and a country store. The inn is typically open from April to October. 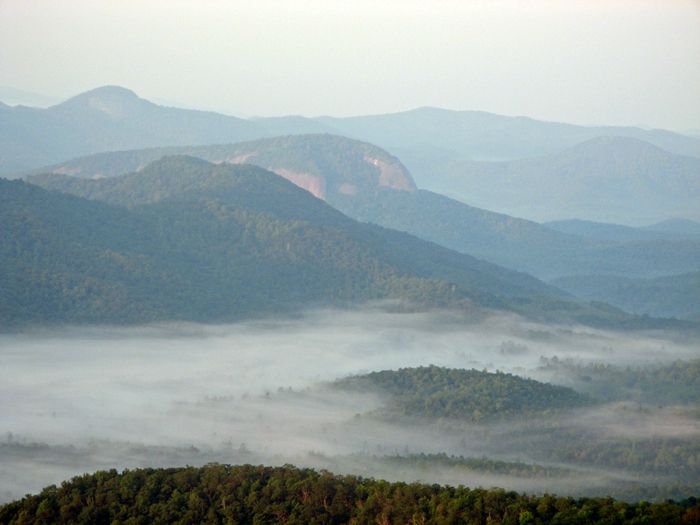