Perhaps, there was something to the superstition, as murder and mayhem were not yet over at the Ruby Mercantile.

The Fraser heirs were shortly thereafter approached by Frank Pearson who was interested in buying the Ruby Mercantile. Though Pearson was vehemently warned of the potential danger, he brushed aside the advice, insisting that another attack was unlikely. The deal was closed and Pearson, his wife, Myrtle, and four-year-old daughter, Margaret, moved in and reopened the store. Less than a year later Mr. and Mrs. Pearson would also be dead. 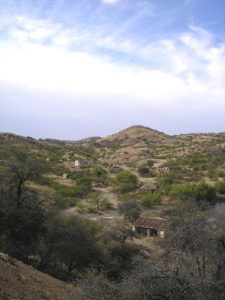 By this time, the town of Ruby was virtually deserted other than the mercantile and post office. Their closest neighbor was eight miles away. They soon sent for Myrtle’s younger sister, Elizabeth Purcell, and also her husband’s sister, Irene, to keep them company and help with the store.

On the morning of August 26, 1921, Mr. and Mrs. Pearson took a horseback ride in the surrounding hills, leaving their young daughter, Margaret, in the capable hands of their sisters. While they were away they spied several vaqueros galloping toward Ruby and believing that they might be needed at the store, they quickly returned.

When the seven Mexican cowboys strode into the store, they immediately demanded tobacco. But as Pearson turned to get it, shots roared from behind him. Grabbing his gun from under the counter, he fired three wild shots at the bandits, but he was mortally injured and fell to the floor dead.

Screaming, Irene Pearson ran to the rear of the building as one of the desperadoes pursued her, waving his pistol wildly. When she stumbled, the vaquero grabbed her by the hair and dragged her across the room. When Myrtle also began to scream, running toward Irene, the bandit threw Irene aside. Having spied five gold-crowned teeth in Myrtle’s open screaming mouth, he brought his gun down hard on her head. He then shot her in the neck, pried open her mouth, and knocked out the gold crowns with the butt of his gun.

While this terrible mutilation was taking place, little four-year-old Margaret appeared in the doorway, her eyes wide with terror. Irene grabbed her and the two hid under a couch. In the meantime, Elizabeth crawled behind the counter where she grabbed Pearson’s shotgun, but one of the bandits was quicker. Another shot rang out and Elizabeth slumped behind the counter.

Amazingly, Myrtle was still alive on the floor. Noticing her twitching body, another bullet was soon sent into her mutilated form and she was dead.

Ignoring the three young girls, the bandits then shot open the safe, pocketing anything of value, before helping themselves to items they wanted from the store. They then tore the phone from the wall as they left on fast horses, screaming like banshees and shooting their pistols in the air.

Irene and Margaret warily crawled from the hiding place and revived Elizabeth who had fainted and luckily had suffered no more than a graze to the arm by the bullet sent her direction. Traumatized, they eventually made their way to the nearest neighbor eight miles away.

By the time authorities arrived at the scene it was evening. They found Pearson behind the counter with two bullets in his back. His wife had a fractured skull, a shot through her neck, a bullet hole through her head, a broken jaw, and of course, the missing teeth. Even the crime-hardened authorities were appalled by the brutality.

Immediately, they suspected that it was those very same bandits who had killed the Fraser brothers. Pearson was shot in the back just like Alexander Fraser, the safe had been robbed once again, and the telephone torn from the wall as before. The description that the girls gave of two of the killers matched those reported a year earlier when the Frasers were killed.

The news of the brutal murders spread rapidly and ranchers from all over joined a posse to search for the killers. In the meantime, the superstitious Mexican locals crossed themselves as they spoke in hushed whispers about the old Tio Pedro legend.  As the lawmen combed the desert hills, an airplane was chartered from the army post at Nogales to fly over the area in a more comprehensive hunt for the vicious criminals. It was the first airplane ever used in Arizona for a manhunt. 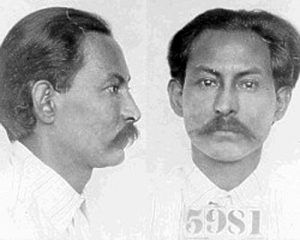 A $5,000 dead or alive reward was soon posted for each of the seven outlaws. Mexican authorities agreed to cooperate with the Arizona lawmen in the capture of the vaqueros. During the following months, reports came in that two Mexican men, drinking in a Senora saloon, had boasted of robbing the Ruby post office. Though Arizona authorities followed up they still were unable to find the men.

By April, 1922, they had almost given up when an Arizona deputy was in a Sasabe, Sonora cantina some thirty-five miles southwest of Ruby. As he was standing at the bar, he overheard the bartender trying to sell something to a customer. As he glanced over, he was shocked to see five gold teeth in the bartender’s hand. Immediately questioning him, he found that the bartender had bought them from another customer by the name of Manuel Martinez. Sure they were those of Myrtle Pearson, the deputy bought the teeth and returned them to the Arizona authorities. Familiar with Martinez, the officials knew that he was often in the company of one Placidio Silvas who lived in a shack in the Oro Blanco district. Silvas was soon brought in for questioning and was identified by witnesses as one of the vaqueros who had been at the Ruby Store the day of the brutal killings. He was quickly charged with the murder of Frank Pearson. On May 10, 1922, Placidio Silvas went on trial for his life.

In the meantime, a manhunt for Manuel Martinez was underway. Before long, he was tracked down in the mountains who threatened to lynch him as a ploy to get him to confess. In no time, Martinez spilled his guts. He was brought in just as the jury was out on Silvas’ verdict. Martinez was immediately booked for murder and Silvas’ jury was dismissed, pending further evidence from Martinez.

Despite his confession, Martinez pleaded not guilty in the Santa Cruz County Superior Court on May 16, 1922. However, two days later, it took 12 jurors only 40 minutes to find him guilty of first-degree murder.

The very next day Silvas’ trial began once again in earnest. Despite the evidence, the jury was hung and a new trial ordered.

A third trial was ordered for Silvas which lasted twenty-one days, going on record as the longest criminal trial ever held in Santa Cruz County. After hours of debate, the jury finally found Silvas, too, guilty of murder.