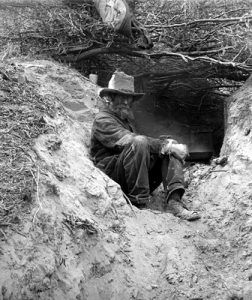 Almost every prospector, whether professional or tenderfoot, had his own pet “lost mine” that he looked for. Hundreds of “lost mine” stories have been localized everywhere over the West. The richest always was somewhere out in the desert, beyond water, or within almost inaccessible mountains, where wild Indians guarded the golden secret handed down to them by their forefathers. Of course, most of these tales were merely inventions or distorted dreams. But the prospector, with only his burro for companionship, was wont to dream strange dreams and, eventually, to transmute them into what he considered reality. On the deserts lie the bones of scores of men who believed these tales and who staked their lives in the search for things which did not exist.

One of the best authenticated of these stories was of the “Lost Soldier Mine.” The story has had little embellishment and, in part, may be true. Briefly narrated, it is this: In the summer of 1869, Abner McKeever and family were ambushed by Apache Indians on a ranch near the Big Bend of the Gila River. McKeever’s daughter, Belle, was taken captive and a number of soldiers gave chase.

The Apache separated into several bands, whose trails were followed by small detachments of soldiers, the most westerly by Sergeant Crossthwaite and two privates, Joe Wormley and Eugene Flannigan. Two of their horses dropped of fatigue and thirst and their provisions ran out. Taking some of the horseflesh with them, they struck northerly, seeking water in what is supposed to have been the Granite Wash range of mountains in Northern Yuma County. Water was found just in time to save their lives, for Wormley already had become delirious. In the morning they found the spring fairly paved with gold nuggets. Above it were two quartz veins, one narrow and the other sixteen feet wide. The soldiers dug out coarse gold by the aid of their knives. About fifty pounds of this golden quartz they loaded on the remaining horse and then set out for the Gila River.

Less than a day’s journey from the river, the three men separated, after the horse had dropped dead. Wormley reached the river, almost demented from his sufferings and was unable to guide a party back into the desert. Men struck out on his trail and soon found Flannigan, who would have lasted only a few hours longer. He was able to tell the story of the gold find, and the rescuing party went farther to find Crossthwaite’s body. In a pocket was a map, very roughly made and probably very inaccurate, on which he had attempted to show the position of the golden spring. Better evidence was secured a few days later in the discovery of the dead horse, with the gold ore strapped to his back. The ore was all that Flannigan claimed and $1,800 was realized from its sale. Flannigan made several unsuccessful attempts to return to the find, but he dreaded the desert and never went very far from the river. He died in Phoenix in 1880. The district into which the party penetrated has been thoroughly prospected during the past twenty years and contains many mines of demonstrated richness. It is possible that the mountain was the Harqua Hala. The find might have been the later famous Bonanza, in a western extension of the mountain, from which several millions of dollars in free gold were extracted. Farther west, around Tyson’s Wells, also has been found placer gold, though none of these discoveries seem to exactly fit the special conditions of the Lost Soldier mine. 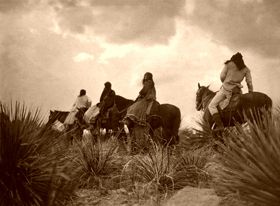 Another “Lost Soldier Mine” was found by a scouting soldier from old Fort Grant in the hills north of the Gila River, not very far from the mouth of the San Pedro. His discovery was of quartz speckled with free gold. The country about has been thoroughly prospected since that time and mines of importance have been worked in that vicinity, but the nearest approach to the discovery of the old-time bonanza has been in the finding of placer gold in several of the gulches.

Most of the stories of lost mines had to them an Indian annex. Usually the story ran that the Indians would bring in gold and silver, but would refuse to tell the secret of their wealth. A man named Ross Browne, in 1863, said that at the store of Hooper & Hunter in Arizona City he saw masses of pure gold as large as the palm of the hand, brought in by adventurers who stated that certain Indians had assured them that they knew places in the mountains where the surface of the ground was covered by the same kind of yellow stones. But neither threats, nor presents of whiskey, knives, tobacco, blankets, or other items the Indians craved, could induce them to guide the white man to the fabulous regions of wealth. The explanation then was given that the Indians were afraid that the white men would come in such numbers that the Indian preponderance of population would be lost.

Most popular of lost mine stories in pioneer days was that of the “Ni**er Ben.” In 1891, a miner named A.H. Peeples, who had been prospecting with the “Weaver Party,” told an editor what he knew of the legend. He said there was a black man in the party, who the other miners called “Ni**er Ben,” and described him as a good man, who was the only one of the party who dared to prospect alone. The Indians would not harm him, evidently on account of his color. He struck up a friendship with several Yavapai chiefs, even when they were the most hostile to the other miners, and they told him of a place where there was much gold, far more than on Rich Hill, where we were working. Ben took a nugget from the prospectors’  stock that was about the size of a man ‘s thumb and showed it to a chief who was especially friendly with him. The Indian said he had seen much larger pieces of the same substance and started off to show him the treasure. Ben was taken to some water holes, about 65 miles northwest of Antelope, toward McCracken, in southern Mohave County. When they arrived; however, the chief would show him no further, seemingly being struck by some religious compunctions he hadn’t thought of before. All he could be induced to do was to toss his arms and say, “Plenty gold here; go hunt.” Ben did hunt for years and was outfitted several times by A.H. Peeples, who believed that he finally died of thirst on the desert. Numbers of others have tried to find the Ni**er Ben diggings, but they have not been discovered as yet. Ed Schieffelin, who discovered the Tombstone mines, would later search diligently for the lost mine, but if he found it, he never told. 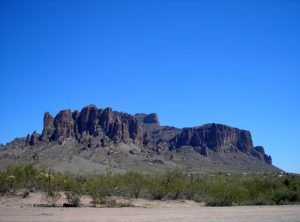 One variety of the “Lost Dutchman” story concerns the operations of a German who made his headquarters at Wickenburg, in the early 1870s. He had a very irritating habit of disappearing from the camp once in a while, going by night, and taking with him several burros, whose feet would be so well wrapped that trailing was impossible. He would return at night, in equally as mysterious a manner, his burros loaded with gold ore of wonderful richness. Efforts at tracking him failed. The country for miles around was searched carefully to find the source of his wealth, which could not have been very far distant. The ore was not the same as that at the Vulture Mine.

The location of the mine never became known to anyone, save its discoverer. He disappeared, as usual, one night, and never returned. The assumption that he was murdered by Apache Indians appears to have been sustained by a prospector’s discovery near the Vulture Mine in the summer of 1895 of the barrel of an old muzzle-loading shotgun, and by it, a home-made mesquite gun stock.