The gun had been there so long that even the hammer and trigger had rusted away. Nearby, was a human skeleton, bleached from long exposure. The next find was some small heaps of very rich gold rock, probably where sacks had decayed from around the ore, and then, a short distance away was discovered a shallow prospect hole, sunk on a gold-bearing ledge. The ore in the heaps was about the same character as that which had been brought into Wickenburg in the early days by the “Lost Dutchman,” but it didn’t agree at all with the ore in the shallow prospect hole, which was not considered worthy of further development.

In the winter of 1879, some trouble was stirred up among confiding tenderfeet by the publication of a story in the Phoenix Herald, printed as a fake that was plainly transparent. It told of the arrival of a prospector from the depths of the Superstition Mountains, from which he had been driven out by pigmy Indians, who had swarmed out of the cliff dwellings. His partner had been killed, and he had escaped only by a miracle. But, the two prospectors had discovered some wonderful gold diggings, from which an almost impossible quantity of dust had been accumulated by a couple of days work. The story was widely copied, and from eastern points, so many inquiries came that the Herald editor had to have a little slip printed to be sent back in reply. On the slip was the word “take.” The editor feared to even remain silent, for most of the letters told of the organization in eastern villages of parties of heavily-armed men to get the gold dust or die in the attempt, and there might have been dire consequences on the head of the imaginative journalist had Phoenix been reached by even one of the desperate rural eastern expeditions.

The largest exploring and prospecting expedition Arizona ever has known since the days of Coronado originated on the tale of a prospector named Miner. He claimed that he was the only survivor of a party that had found wonderful placer diggings somewhere near a hat-shaped hill over beyond the Tonto

Basin. From a single shovelful of earth had been panned seventeen ounces of gold. In May 1871 he was in Prescott, coming with several companions from Nevada, and in that month reached Phoenix from the North with about thirty men. The point of rendezvous was near old Fort Grant, where 267 men joined them, divided into five companies.

At the head of the Prescott Party was Ed. Peck, discoverer of the famous Peck Mine at Alexandria. Other members were, Bob Groom, the noted pioneer; Al Sieber, the foremost Indian campaign scout of the Southwest, Willard Rice and Dan O’Leary. Governor A.P.K. Safford commanded the recruits from Tucson and was elected commander-in-chief of the party at the camp near Grant.

From Tucson and Sonora, they were joined by two large companies of Mexicans. From Grant, they marched to the Gila River, up the San Carlos and then to the Salt River. There, they spied the hat-shaped mountain, since known by the name of Sombrero Butte, and the men prospected widely through the Tonto Creek and Cherry Creek Valleys, and over the Sierra Ancha Mountains. Returning down Cherry Creek, prospecting continued up the Pinto Creek and Pinal Creek Valleys. 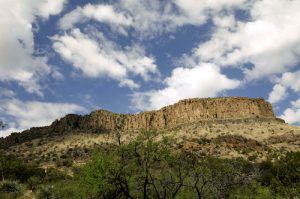 Finally, in disgust, the different parties separated at Wheatfields and returned to their homes. Miner, at the time, was thought to have been mistaken in his bearings, but members of the party later became convinced that he was merely a liar.

Possibly connected with the Miner tale that led Safford and his party very far afield was the lost Thorne Mine. This story was based on the adventures of a young surgeon named Thorne, who, having cured the eye troubles of a couple of Apache Indians where he was stationed, was induced to visit the Indian village where there was an epidemic of the same disorder. He was blindfolded and taken to the village, not knowing his direction. After he had conquered the epidemic, he was placed upon a horse and taken to a deep rock-walled canyon laced with a high ledge of quartz that glittered with flecks of gold. Below, in the sand of the wash, was almost a pavement of gold nuggets. Thorne pretended that the sand was of little value, but furtively took all that he could. In the distance, he saw a high mountain, crowned with a peculiar rocky formation like a gigantic thumb turned backward (a description that might be Sombrero Butte) to the east of Cherry Creek Valley. Though the Indians pressed handfuls of the nuggets upon him, Thorne still persisted that the stuff was worthless and refused to take any, convinced that he could again find the treasure. He led two expeditions into the country, but found no less than four such formations such as he remembered and the bonanza never was discovered. Thorne was afterwards  denounced as an impostor. It is a fact; however, that the Cibicu Indians of the Cherry Creek Valley knew of the existence of a rich placer field. On one occasion, Alchisay, a Chiricahua Apache scout, is known to have pawned a nugget worth $500 for $10 worth of supplies, and later to have redeemed the gold, of which he seemed to know the full value.

In the desert somewhere west of Vurna, many expeditions have searched for the lost Peg-Leg Mine, said to have been discovered by a one-legged individual named Smith, about forty years ago. Some thought the mine was located in Arizona, but whatever its location, it has never been found, and may have been only in the imagination of a rum-soaked prospector.

Prominent among the “lost mines” stories of Northern Arizona was that of the “Adams Diggings.” Most indefinite are the details, and the various locations indicated lie anywhere from the Colorado River through to Globe. Adams understood to have been a San Bernardino colony Mormon, in 1886 heard from a Mexican, a story of a rich gold deposit, and forming a party of 22 men, struck eastward to a point supposed to have been near Fort Apache, where the “Diggings” were found. The story continues that after working for a while, eleven of the party started for the Pima villages for supplies. They failed to return and nine more, driven by impending hunger, took the same trail, leaving in camp only Adams and two others. The three, finally driven out by famine, started out and found on their trail, the bodies of all their comrades, who had been murdered by Apache Indians. The trio succeeded in returning safely to San Bernardino and in 1875, gathered twelve men to return to the lost bonanza. James C. Bell, later of Globe, with two companions joined this party near Prescott and were made members, while four more joined at Fort Verde. The lapse of time had made Adams very uncertain in his location, but he remembered that it was in a deep canyon running in an easterly direction, at a point where a gold ledge was sharply defined on the sides of the gulch, and near two black buttes. The men searched as far as the Gila River, near San Carlos and then up to the headwaters of the Gila and back again to Fort Apache, but they had no success and still undiscovered are the ashes of an old cabin where Adams told Bell, was buried gold dust worth at least $5,000.

Written by James Harvey McClintock in 1913, compiled and edited by Kathy Weiser/Legends of America, updated January 2018.

Notes and Author:  This article is primarily a tale told by James Harvey McClintock between the years of 1913 and 1916 when he published a three-volume history of Arizona called Arizona: The Youngest State. However, the article that appears here is far from verbatim. While the story remains essentially the same as originally published, heavy editing has occurred for spelling and grammar corrections, revisions for the modern reader, and updates to this historic tale. McClintock began his career working at the Salt River Herald (later known as the Arizona Republic). He later earned a teaching certificate, served as Theodore Roosevelt’s right-hand-man in the Rough Riders, and become an Arizona State Representative. He died in California on May 10, 1934, at the age of 70.