Fort Smith is best known for Federal Judge Isaac C. Parker, whom President Ulysses S. Grant appointed to the bench in 1875. Replacing Judge William Story, whose tenure had been marred by corruption, Judge Isaac Parker arrived at Fort Smith on May 4, 1875.

For the next 21 years, Parker presided over 13,000 cases and 79 offenders were hanged for their crimes, earning him the nickname of the “Hanging Judge.” Parker proved to be a tireless defender of Indian rights and through his efforts brought law and order to Indian Territory.

As the non-Indian population increased, new courts emerged in Indian Territory, gradually reducing Parker’s authority. On March 1, 1895, Congress enacted legislation that limited Parker’s jurisdiction to several counties in western Arkansas. This legislation became effective on September 1, 1896. The last execution there occurred shortly before that on July 30. 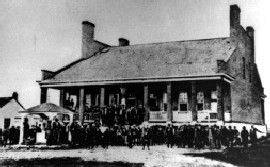 Beginning during the time of the Federal Courthouse and continuing into the late 19th and early 20th centuries, a series of events changed the appearance of the historic fort. By the act of February 17, 1883, Congress granted rights-of-way through the former military reservation to the St. Louis and San Francisco Railroad.

Sometime between May 1886 and February 1889, the railroad company removed a portion of the garrison wall to accommodate trackage, effectively separating the Quartermaster Building from the rest of the fort. The Missouri Pacific Railroad soon paralleled the St. Louis and San Francisco and also cut through the fort.

A May 29, 1896 bill called for lands inside the garrison to be granted to the city of Fort Smith. Although the use of the Federal Jail continued as late as 1914, the government transferred the remainder of the military reserve to the city.

On February 26, 1897, Congress enacted legislation to extend Parker and Rogers Avenues, and Third and Second Streets through this property. The Old Fort Reserve Addition was surveyed in June and sold to private concerns. The stone wall of the fort was dismantled between July 1, 1897, and July 1, 1898, after which time the streets were extended. By 1900, several large multi-storied brick buildings had been built or were under construction, and the Old Fort Reserve Addition emerged as the light industrial and warehouse district of Fort Smith. The Courtroom/Jail complex became a civic center and housed a variety of city offices and community organizations. Sometime around the turn of the century, Belle Point was densely populated and acquired the name “Coke Hill.” Coke Hill was a squatter settlement and the individual plots of lands were randomly oriented, ignoring the city of Fort Smith’s platted lot system. 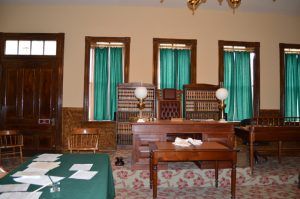 Public interest in the old fort increased during the early 20th century. In 1910, the Old Fort Museum Association occupied the Commissary and used the building as a museum. In 1957, the courthouse was restored to its original condition. Local businessmen donated funds to purchase private interests on Coke Hill and in 1958 sponsored the first archaeological excavation at the site. In 1961, the city of Fort Smith donated eleven acres of land containing the site of the first fort, the Courtroom/Jail complex, and the Commissary Building to the National Park Service. Since the creation of Fort Smith National Historic Site, landholdings of up to 75 acres have been authorized and several intrusive streets and post-historic buildings have been removed.

Today, the Fort Smith National Historic Site includes the remains of the two frontier forts and the Federal Court for the Western District of Arkansas. 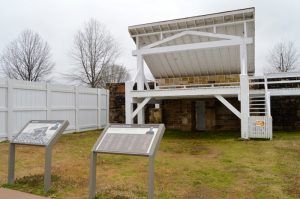 If it’s Old West reputation isn’t enough, the old courthouse is said to be haunted by none other than Judge Parker himself. Allegedly, many of those executed on these historic grounds are also said to lurk on the property.

When I visited Fort Smith, Judge Parker’s Courthouse was closed, so I walked around the building a bit. Of course, my interest was drawn to the large gallows. I believe that it was a replica, but I climbed the stairs and approached the cross beam when I suddenly felt this chill, (on a very warm day), and a feeling that this was an evil area, and I quickly left and went to my nearby car. My wife, who also has a “sixth sense,” as I and observed my movement on the scaffold, asked if I had felt something eerie, as she had. Maybe it just a fluke, but then again, some things cannot be explained. — D. Ward Gagner, Bangor, Maine, November 2007 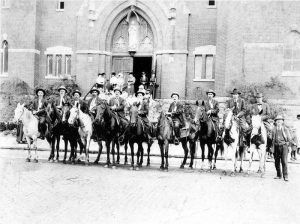