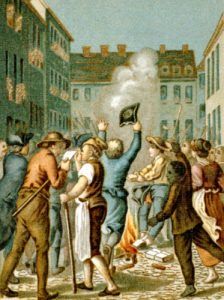 Burning of the stamp act

However, this would begin to change when England decided to keep a standing army in the colonies for their protection, and to force the colonists to bear a part of its cost. To help raise the needed money the Stamp Act was passed. This law compelled the people to buy stamps that had to be placed upon business contracts, legal papers, and newspapers. Some of the stamps cost but a penny or two; others, from twenty to fifty dollars.

The colonists were incensed, not so much because of the tax, but, because of the way in which it was levied, and because of its purpose. One of the rights an Englishman holds most precious is that of being represented in the lawmaking body that decides upon the taxes. It is true that the Americans had their own Assemblies, but they were not represented in Parliament, the English taxing body. And, it was Parliament that had levied the Stamp Tax and had made other unsatisfactory laws for the colonists. Moreover, the colonists did not believe that a standing army was needed in America in a time of peace.

People in Boston greeted the Stamp Act as they would have greeted some great sorrow. The church bells were tolled, the flags were put at half-staff, and a storm of protest broke forth.

In New York, copies were made of the law, but, in place of the king’s coat of arms, usually printed on all legal papers, a grinning skull appeared. The people then destroyed boxes of the hated stamps and stamped paper, and threatened the men who were appointed to collect the stamp tax. James Otis suggested that a Congress be called to take action. Nine of the colonies sent delegates to this Congress, which was held in New York and signed a petition that was sent to the king and to Parliament.

After much debate, the Parliament saw that they had made a mistake and repealed the Stamp Act. However, King George saw it differently. Not willing to listen to his advisers, he believed in showing the colonists “their place.” With his influence, Parliament then passed several laws taxing the colonists in other ways, including duties on various imports such as glass, lead, paper, and tea. The levying of these taxes, together with the presence of British troops sent to the colonies, caused further anger among the colonists.

On January 17, 1770, British soldiers sawed down a “Liberty pole,” which had been placed in what is now City Hall Park, in New York City by the “Sons of Liberty,” a group of American Patriots. The pole, complete with banners, had been set up in celebration of the Stamp Act having been repealed in 1765. Two days later, when the soldiers also began posting British handbills that were titled “God and a Soldier,” which attacked the Sons of Liberty as “the real enemies of society.”  man named Isaac Sears and several others tried to stop them. The group then captured some of the soldiers and marched his captives toward the mayor’s office. More colonists gathered and when more soldiers arrived to disburse them, it resulted in a skirmish known as the Battle of Golden Hill. In the melee, several of the soldiers were badly bruised and one a had a serious wound. Some of the townsfolk were also wounded and one had been fatally stabbed.

Two months later, On March 5th, a similar clash occurred in Boston. That evening, when a party of boys taunted a British sentry in front of the custom house door, a guard came out and a crowd gathered. As the crowd grew larger, more people began to harass the soldiers, and in the end shots were fired. Five civilians were killed and several wounded.

The resentment of the colonists grew. Throughout the country rang the bold words of Patrick Henry, of Virginia: “Taxation without representation is tyranny!” The colonists refused to buy goods from English merchants until the taxes were repealed. This, in turn, called forth a protest from the merchants, who were rapidly losing money. But, the king’s party argued that if every one of the taxes placed upon the colonists were taken away, the colonists would feel that they had won.

So another plan was adopted. Most of the taxes were removed, but a small tax upon tea was retained. The tax was so small that it was cheaper for the colonists to buy their tea from England than to smuggle it from Holland and the English merchants were sure they would get back their trade.

But, the Americans, still refused to buy their tea and when three shiploads came into the Boston harbor in the fall of 1773, the colonists decided to act. They warned the ship’s master that “it was at his peril, if he suffered any of the tea brought by him to be landed.” They urged him to take his tea back to England. But the governor would not permit him to sail out of the harbor, and kept warships on the watch to prevent his doing so.

On the morning of December 16, 1773, thousands of people gathered at a town meeting. “How will tea mingle with salt water?” some one hinted. Action was taken that very evening. At about nine o’clock there rang through the quiet streets the war whoop of Mohawk Indians. Fifty white Party men in Indian guise, hatchet in hand, rushed down to the wharf and boarded the ships. The tea chest were then opened and their contents thrown overboard into the sea.

The news of this daring spread to the other cities to which tea had been sent — New York, Philadelphia, and Charleston. They were inspired by the action of brave little Boston and they, too, refused to buy the tea. Boston’s punishment came quickly. Her port was ordered closed until she should pay for the destroyed tea. This meant that nearly all her business was stopped, and that she could get no supplies by sea. The English government thought that, by making an example of Massachusetts in this way, it would frighten the other colonies into submission. But, it was mistaken. The colonies felt that Boston was suffering for them all, so they loyally rallied around her and sent her supplies, accompanied by messages of courage. The women, in societies known as the “Daughters of Liberty,” pledged themselves to wear homespun clothes and not to drink tea.