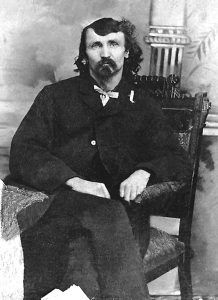 Alfred Griner Packer, who was a prospector and guide in the Rocky Mountains during the 1870s who confessed to cannibalism during the winter of 1874.

Packer was born in Allegheny County, Pennsylvania on January 21, 1842, one of three children of James Packer and his wife Esther Griner. When Alfred was still a boy, the family moved to LaGrange County, Indiana in the early 1850s, where his father worked as a cabinet maker. When Packer grew up, he served in the Union Army during the Civil War, enlisting in April 1862 at Winona, Minnesota. At that time he gave his occupation as a shoemaker. He was honorably discharged due to epilepsy eight months later, at Fort Ontario, New York. He then moved west where he enlisted in the army again at Ottumwa, Iowa in June 1863. However, he was soon mustered out for a second time in April 1864 for the same reason.

He then moved further west winding up in the Rocky Mountains where he worked at various mining-related jobs for the next nine years.

In November 1873, Packer joined Bob McGrue’s party of 21 men, who left Provo, Utah for the gold country around Breckenridge, Colorado. The winter of 1873-74 was unusually harsh. After three months of difficult travel, the party staggered into the camp of the Ute Indian Chief Ouray, near present-day Montrose, Colorado. Chief Ouray recommended they postpone their expedition until spring since they were likely to encounter dangerous winter weather in the mountains and offered to allow the men to stay with his tribe until the winter had passed.

However, four of the men became restless and decided to ignore Ouray’s advice and travel to the government cattle camp near the Los Pinos Indian Agency near Gunnison, Colorado. The four men left and Packer attempted to follow them, but at gunpoint, the men ordered him to return to camp and stay away from them. Alfred did as he was told, but still wanted to leave and the following week, on February 9, Packer and five others left for the Los Pinos Indian Agency. Besides Packer, the group comprised Shannon Wilson Bell, James Humphrey, Frank “Reddy” Miller, George “California” Noon, and Israel Swan. The leader of the outfit, Bob McGrue, guided Packer’s party until the horses could not continue, at which point, McGrue unloaded the men’s provisions and went back to Ouray’s camp along with the horses. 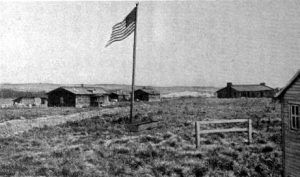 On April 16, 1874, Packer arrived at the Los Pinos Indian Agency alone, looking surprisingly fit for a man who had just completed an arduous winter trek through the Rockies. When Preston Nutter, a member of the first group that had left Ouray’s camp, asked Packer what happened to the rest of his party, Packer claimed that he had “got his feet wet and frozen”, and the others had abandoned him.

After a short stay at the Agency, Packer wanted to travel eastward and accompanied Nutter and two other men to Saguache, Colorado. During the course of this journey, Nutter saw that Packer had in his possession a skinning knife that had belonged to Frank “Reddy” Miller and began to have doubts about Packer’s story. Once they arrived in Saguache, Packer began to spend money freely, even offering a loan to one man. This made Nutter and other members of the original party very suspicious and threatened to hang Packer. However, General Charles Adams, head of the Los Pinos Indian Agency, stepped in just in time to save Packer. He then began to investigate and after interrogating Packer, the mountain man signed his first confession, which stated:

“Old Man Swan died first and was eaten by the other five persons about ten days out of camp. Four or five days afterward Humphreys died and was also eaten; he had about one $133. I found the pocketbook and took the money. Some time afterward, while I was carrying wood, the butcher was killed — as the other two told me accidentally — and he was also eaten. Bell shot “California” with Swan’s gun and I killed Bell. Shot him. I covered up the remains and took a large piece along. Then traveled 14 days into the agency. Bell wanted to kill me with his rifle—struck a tree and broke his gun.” 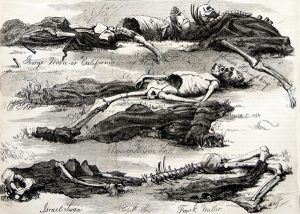 General Adams believed that if Packer were telling the truth, he would have no problem leading a party of men to the original campsite where the physical evidence would either prove or disprove Packer’s story. Packer originally consented to lead the party, but after claiming to be lost and rushing at Constable Herman Lauter with a knife, he was jailed in Saguache. In the meantime, a party of searchers found the remains of the five men at a single campsite-not strung out along the trail as Packer had claimed. Packer was arrested and charged with murder. However, the jail was little more than a log cabin and after being passed a makeshift key for his irons and given some supplies, Packer easily escaped.

Nine years later, on March 11, 1883, Packer was discovered in Cheyenne, Wyoming living under the alias of “John Schwartze”. He was found by Jean “Frenchy” Cabazon, one of the original members of the Utah mining party who stayed in Chief Ouray’s camp in the winter of 1874. Cabazon reported Packer to the local sheriff, who apprehended him and contacted General Adams. Packer was then transported to Denver for additional questioning. General Adams soon arrived and persuaded Packer to make a second confession, which he signed on March 16th. Instead of claiming that the men gradually killed each other to survive, Packer now claimed that Shannon Bell had gone mad and killed the others with a hatchet while Packer was out scouting. When Bell spotted Packer, he charged with his hatchet raised, and Packer shot him twice in the belly. Lost and trapped alone in a camp of dead men, Packer said he only resorted to cannibalism after several more days, when it was his only means of survival.

On April 6th, a trial began in Lake City, Colorado, and seven days later Packer was found guilty of premeditated murder and sentenced to death by hanging. According to a local newspaper, the presiding judge, M. B. Gerry, said:

“Stand up yah voracious man-eatin’ sonofabitch and receive yir sintince. When yah came to Hinsdale County, there was siven Dimmycrats. But you, yah et five of ’em, goddam yah. I sintince yah t’ be hanged by th’ neck ontil yer dead, dead, dead, as a warnin’ ag’in reducin’ th’ Dimmycratic populayshun of this county. Packer, you Republican cannibal, I would sintince ya ta hell but the statutes forbid it. ”

Court records, however, reveal that Judge Gerry’s prose was much more educated:

“Alfred Packer, the judgment of this court is that you be removed from hence to the jail of Hinsdale County and there confined until the 19th day of May, 1883, and that on said 19th day of May 1883, you be taken from thence by the sheriff of Hinsdale County to a place of execution prepared for this purpose, at some point within the corporate limits of the town of Lake City, in the said county of Hinsdale, and between the hours of 10 A.M. and 3 P.M. of said day, you, then and there, by said sheriff, be hung by the neck until you are dead, dead, dead, and may God have mercy upon your soul.” 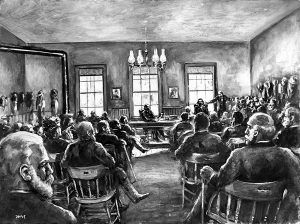 However, the execution was stayed due to appeals and in October 1885, the sentence was reversed by the Colorado Supreme Court as being based on an ex-post-facto law.

He was then retried in Gunnison and on June 8, 1886, and having twice changed his story, Packer’s credibility was undermined. The jury convicted him of five counts of manslaughter and sentenced him to 40 years (8 years for each count). At the time, this was the longest custodial sentence in U.S. history.

On June 19, 1899, Packer’s sentence was upheld by the Colorado Supreme Court and he remained imprisoned in the Canon City penitentiary until he was paroled on February 8, 1901. After his parole, Packer went to work as a guard at the Denver Post and lived quietly in and around Littleton, Colorado, maintaining his innocence until the day he died. He was said to have been a model citizen and well-liked by all of his neighbors.

He passed away in Deer Creek, Colorado on April 23, 1907, reputedly of “Dementia – trouble & worry” at the age of 65. Packer is widely rumored to have become a vegetarian before his death. He was buried in Littleton, Colorado. He was buried with military honors and his grave is marked with a veteran’s tombstone listing his original regiment in 1862. 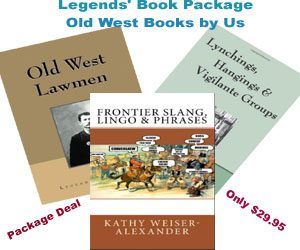 H. H. Holmes and the Murder Castle of Chicago

The Tragic Story of the Donner Party