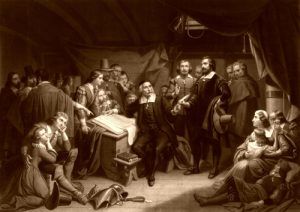 The voyage of the Mayflower; the landing upon a desolate coast in the dead of winter; the building of those ten small houses, with oiled paper for windows; the suffering of that first winter and spring, in which woman bore her whole share; these were the first steps in the grand movement which has carried the Anglo-Saxon race across the American continent. The next steps were the penetration of the wilderness westward from the sea, by the emigrant pioneers and their wives. Fighting their way through dense forests, building cabins, block-houses, and churches in the clearings which they had made; warred against by cruel savages; woman was ever present to guard, to comfort, to work. The annals of colonial history teem with her deeds of love and heroism, and what are those recorded instances to those which had no chronicler?

She loaded the flint-lock in the block-house while it was surrounded by yelling savages; she exposed herself to the scalping-knife to save her babe; in her forest-home she worked and watched, far from the loved ones in Old England; and by discharging a thousand duties in the household and the field, did her share in a silent way towards building up the young Republic of the West.

Sometimes she ranged herself in battle beside her husband or brother, and fought with the steadiness and bravery of a veteran. But her heroism never shone so brightly as in undergoing danger in defense of her children.

In the early days of the settlement of Royalton, Vermont, a sudden attack was made upon it by the Indians. Mrs. Hendee, the wife of one of the settlers, was working alone in the field, her husband being absent on military duty, when the Indians entered her house and capturing her children carried them across the White River, at that place a hundred yards wide and quite deep for fording, and placed them under keepers who had some other persons, thirty or forty in number, in charge.

Returning from the field Mrs. Hendee discovered the fate of her children. Her first outburst of grief was heart-rending to behold, but this was only transient; she ceased her lamentations, and like the lioness who has been robbed of her litter, she bounded on the trail of her plunderers. Resolutely dashing into the river, she stemmed the current, planting her feet firmly on the bottom and pushed across. With pallid face, flashing eyes, and lips compressed, maternal love dominating every fear, she strode into the Indian camp, regardless of the tomahawks menacingly flourished round her head, boldly demanded the release of her little ones, and persevered in her alternate upbraidings and supplications, till her request was granted. She then carried her children back through the river and landed them in safety on the other bank.

Not content with what she had done, like a patriot as she was, she immediately returned, begged for the release of the children of others, again was rewarded with success, and brought two or three more away; again returned, and again succeeded, till she had rescued the whole fifteen of her neighbors’ children who had been thus snatched away from their distracted parents. On her last visit to the camp of the enemy, the Indians were so struck with her conduct that one of them declared that so brave a squaw deserved to be carried across the river, and offered to take her on his back and carry her over. She, in the same spirit, accepted the offer, mounted the back of the gallant savage, was carried to the opposite bank, where she collected her rescued troop of children, and hastened away to restore them to their overjoyed parents. 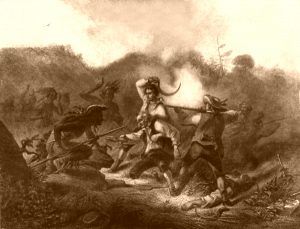 During the memorable Wyoming massacre, Mrs. Mary Gould, wife of James Gould, with the other women remaining in the village of Wyoming, sought safety in the fort. In the haste and confusion attending this act, she left her boy, about four years old, behind. Obeying the instincts of a mother, and turning a deaf ear to the admonitions of friends, she started off on a perilous search for the missing one. It was dark; she was alone; and the foe was lurking around; but the agonies of death could not exceed her agonies of suspense; so she hastened on. She traversed the fields which, but a few hours before, “were trampled by the hurrying crowd,” where “—-fiery hearts and armed hands, encountered in the battle cloud,” and where unarmed hands were now resting on cold and motionless hearts. After a search of between one and two hours, she found her child on the bank of the river, sporting with a little band of playmates. Clasping her treasure in her arms, she hurried back and reached the fort in safety.

During the struggles of the American Revolution, the privations sustained, and the efforts made, by women, were neither few nor of short duration. Many of them are delineated in the present volume. Yet innumerable instances of faithful toil, and patient endurance, must have been covered with oblivion. In how many a lone home, from which the father was long sundered by a soldier’s destiny, did the mother labor to perform to their little ones both his duties and her own, having no witness of the extent of her heavy burdens and sleepless anxieties, save the Hearer of prayer.

A good and hoary-headed man, who had passed the limits of fourscore, once said to me, “My father was in the army during the whole eight years of the Revolutionary War, at first as a common soldier, afterwards as an officer. My mother had the sole charge of us four little ones. Our house was a poor one, and far from neighbors. I have a keen remembrance of the terrible cold of some of those winters. The snow lay so deep and long, that it was difficult to cut or draw fuel from the woods, or to get our corn to the mill, when we had any. My mother was the possessor of a coffee-mill. In that she ground wheat, and made coarse bread, which we ate, and were thankful. It was not always we could be allowed as much, even of this, as our keen appetites craved. Many are the time that we have gone to bed, with only a drink of water for our supper, in which a little molasses had been mingled. We patiently received it, for we knew our mother did as well for us as she could; and we hoped to have something better in the morning. She was never heard to repine; and young as we were, we tried to make her loving spirit and heavenly trust, our example.

“When my father was permitted to come home, his stay was short, and he had not much to leave us, for the pay of those who achieved our liberties was slight, and irregularly given. Yet when he went, my mother ever bade him farewell with a cheerful face, and told him not to be anxious about his children, for she would watch over them night and day, and God would take care of the families of those who went forth to defend the righteous cause of their country. Sometimes we wondered that she did not mention the cold weather, or our short meals, or her hard work, that we little ones might be clothed, and fed, and taught. But she would not weaken his hands, or sadden his heart, for she said a soldier’s life was harder than all. We saw that she never complained, but always kept in her heart a sweet hope, like a well of water. Every night ere we slept, and every morning when we arose, we lifted our little hands for God’s blessing on our absent father, and our endangered country.

“How deeply the prayers from such solitary homes and faithful hearts were mingled with the infant liberties of our dear native land, we may not know until we enter where we see no more ‘through a glass darkly, but face to face.’

“Incidents repeatedly occurred during this contest of eight years, between the feeble colonies and the strong mother-land, of a courage that ancient Sparta would have applauded.