Resistance to the gains in civil rights for Africa-Americans was formidable. Force and intimidation dating from the previous century, in defiance of the 14th and 15th amendments to the U.S. Constitution, sustained the system of racial segregation until the civil rights acts of the 1960’s. In 1866 race riots erupted in Memphis, Tennessee and Vicksburg, Mississippi and on July 30th of the same year over 40 African-American delegates were killed in New Orleans during a meeting at the Mechanic Institute Building to reconvene the state’s constitutional convention. In 1873, over 300 African-Americans were killed by white supremacists in Grant Parish, Louisiana, the result of a disputed election, in what has been called “…the worst incident of mass racial violence in the Reconstruction period. 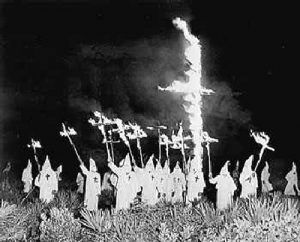 The Ku Klux Klan (KKK), which was founded by former Confederate General Nathan Bedford Forest in Pulaski, Tennessee, in 1866, and other similar groups, such as the Knights of the White Camelia and the Boys of 76, roamed the countryside, hooded or otherwise, terrorizing African-Americans and their supporters in the name of white supremacy. Over succeeding decades, the KKK underwent sporadic surges of popularity, as, during the 1920’s when the organization added anti-immigrant and anti-Semitism to its litany of hate. In 1954, the KKK re-emerged more determined than ever to stop integration, following the Supreme Court’s landmark Brown decision, which also spurred the formation of White Citizen Councils throughout the South. The first meeting of a White Citizens Council, whose members considered themselves to be more respectable than those of the KKK but, who were just as adamantly opposed to integration, occurred in Indianola, Mississippi in July 1954. Byron De La Beckwith, who assassinated civil rights leader, Medger Evers, in Jackson, Mississippi in June 1963 was a member of both the KKK and a White Citizens Council.

The murders of three civil rights volunteer workers in Philadelphia, Mississippi in June 1964 increased public support for the growing racial equality movement. Such tragedies also strengthened the resolve of African-Americans in their quest for racial equality, as civil rights leader Stokely Carmichael noted:

“They killed them, but they can’t kill the summer, and what we’re doing to do this summer. They can’t kill our spirit, only our bodies. They’ll find out what they did when they murdered our people, our brothers. They’ll find that they made us strong, that we’ll beat them sooner, because of what they’ve done. The whole nation will rally round — but even more important, we’ll rally round.” 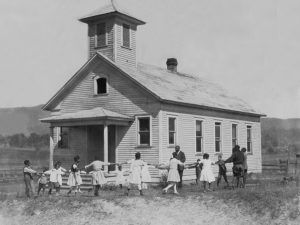 Other examples further set the tone of the tumultuous 1960’s civil rights struggles. In 1964, Fannie Lou Hamer of Ruleville, Mississippi drew national attention for her work as a civil rights organizer and her futile attempts to seat the Mississippi Freedom Democratic Party delegates at the Democratic Party’s presidential nomination convention in Atlantic City. Throughout the summer of the same year, Freedom Schools staffed by northerners enrolled thousands of young African-Americans and voter registration drives during the summer, which was known as Freedom Summer, and brought many disfranchised African-Americans to the ballot box for the first time. A Mississippi sheriff objected to the presence of civil rights workers from the North, whom he looked upon as busybodies and interlopers, declaring: “Ninety-five percent of our blacks are happy.” In response, some 20 rural African-Americans in his county wrote or dictated letters indicating grievances. One wrote:

“In our schools we don’t have the books the whites have. We can’t get to learn anything. The colored people is afraid to tell you all we is not happy because we’re scared of losing the jobs we have. When we go to the gas stations we don’t have any bathrooms. We’re glad that the white people are coming down from the North and that they are thinking of our welfare. We work 12 hours a day and only get $3 pay. Sure, we’re inferior. The white folks over us every way.”

The failure of many Southern states to enforce the voter registration provisions of the Civil Rights Act resulted in an upsweep of civil rights demonstrations, of which, one of the most notable occurred in Alabama. In February 1965 Dr. Martin Luther King, Jr. and over 700 other African-Americans were arrested in Selma, and a month later Alabama state troopers frustrated an attempted civil rights march from Selma to Montgomery, the state capital. On March 20th, President Lyndon Johnson ordered the Alabama National Guard to protect the marchers, after Governor George Wallace earlier refused to protect them, and a procession of approximately 25,000 African-Americans and whites from all over the country began.

In response, Congress enacted the Voting Rights Act, signed by President Johnson on August 6, 1965, which suspended all voter registration literacy tests. In addition, the act empowered federal examiners to register all who qualified age, residence, and objective educational requirements. The act also authorized the Attorney General to file suits testing the constitutionality of poll taxes in states where it survived. In April 1966 the last poll tax, in Mississippi, was overturned. The civil rights movement thus came to full bloom in the 1960’s, though African-Americans, as recently as 1973, worked and marched to bring racially based injustices to an end in Cairo, Illinois, chronicled by Preston Ewing, Jr., in his book, Let My People Go (1996), and continue to strive for racial equality today.

Compiled and edited by Kathy Weiser/Legends of America, updated April 2019. 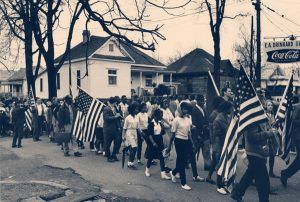