It was a quiet Sunday morning, on November 28, 1773, when the Dartmouth, one of the three tea-ships on the way to Boston, sailed into the harbor. The people were attending service in the various churches when the shout, “The Dartmouth is in!” spread like wildfire, and soon the streets were astir with people.

Fearing that the tea might be landed, a number of people quickly got together and secured a promise from Benjamin Rotch, the owner of the Dartmouth, that the tea should not be landed before Tuesday. On Monday morning an immense town meeting was held in Faneuil Hall, the “Cradle of Liberty.” Five thousand men were present. But, Faneuil Hall proving too small, the crowd had to make its way to the Old South Church. In addressing the meeting Samuel Adams asked, “Is it the firm resolution of this body that the tea shall not only be sent back but that no duty shall be paid thereon?” With a great shout, the men answered “Yes.” The other two ships arrived a few days later.

Samuel Adams and the people of Boston and the surrounding towns were determined that the tea should not be landed. Governor Hutchinson was equally determined that it should be. The advantage was with the Governor, for according to law the vessels could not return to England with the tea unless they got a clearance from the Collector of Customs or a pass from the governor.

Neither the Collector of Customs nor Governor Hutchinson would yield an inch. For nineteen days the struggle continued, growing daily more bitter. With a stubborn purpose to prevent the landing of the tea even if they had to fight, the Boston people appointed men, armed with muskets and bayonets, some to watch the tea ships by day and some by night. Six couriers were to be ready to mount their horses, which they kept saddled and bridled, and speed into the country to give the alarm to the people. Sentinels were stationed in the church-belfries to ring the bells, and beacon fires were ready to be lighted on the surrounding hilltops.

The morning of December 16th had come. If the tea should remain in the harbor until the next day – the twentieth day – the revenue officer would be empowered by law to land it by force. Men, talking angrily and shaking their fists with excitement, were thronging into the streets of Boston from surrounding towns. By ten o’clock over 7,000 had assembled in the Old South Church and in the streets outside.

They were waiting for the coming of Benjamin Rotch, who had gone to see if the collector would give him a clearance. Rotch came in and told the angry crowd that the collector refused to give the clearance. The people told him that he must get a pass from the Governor. Fearing for his personal safety, the poor man started out to find Governor Hutchinson who had purposely retired to his country home at Milton. Then the meeting adjourned for the morning.

At three o’clock a great throng of eager men again crowded into the Old South Church and the streets outside to wait for the return of Rotch. It was a critical moment. “If the Governor refuses to give the pass, shall the revenue officer be allowed to seize the tea and land it tomorrow morning ?” Many anxious faces showed that men were asking themselves this momentous question.

But while, in deep suspense, the meeting waited and deliberated, a merchant named John Rowe said, “Who knows how tea will mingle with salt water? ” A whirlwind of applause swept through the assembly and the masses outside the church. As daylight deepened into darkness, candles were lighted. Shortly after 6:00 o’clock, Benjamin Rotch entered the church and, with a pale face, said, “The Governor refuses to give a pass.” An angry murmur arose, but the crowd soon became silent, when Samuel Adams arose and said, “This meeting can do nothing more to save the country.”

This was plainly a concerted signal. In an instant, a war-whoop sounded, and forty or fifty “Mohawks,” or men dressed as Indians, who were waiting outside, dashed past the door and down Milk Street toward Griffin’s Wharf, where the tea-ships were lying at anchor. It was a bright moonlit night, and everything could be plainly seen. Many men stood on the shore and watched the “Mohawks” as they broke open 342 chests, and poured the tea into the harbor. There was no confusion. All was done in perfect order.

The “Boston Tea Party,” of which Samuel Adams was the prime mover, was a long step toward the American Revolution. Samuel Adams was at this time, almost or quite alone in his desire for Independence, and he has well been called the “Father of the Revolution.” But, his influence for the good of America continued far beyond the time of the “Boston Tea Party.” Up to the last, his patriotism was earnest and sincere.

He remained in politics, serving as Massachusetts Lieutenant Governor and Governor. He retired from politics at the end of his term as governor in 1797. He died at the age of 81 on October 2, 1803, and was interred at the Granary Burying Ground in Boston.

About this Article: Though a number of sources were used for some of the content; much of the text as it appears here is excerpted from Wilbur F. Gordy’s book, American Leaders and Heroes, published in 1903. However, the article is far from verbatim as a significant amount of information has been added and much of the original text heavily edited. 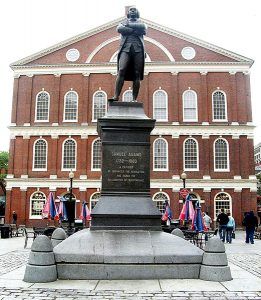