The language of the First Continental Congress sounds bold, but the people themselves were bolder. Companies of armed men began drilling everywhere, and the Americans were eager for a conflict with the detested “red coats.” The excitement was more intense in Massachusetts than anywhere else, and it was plain that the opening gun of the impending Revolution would be fired upon her soil. The affairs of the colony were directed by a provincial congress, which collected a quantity of guns and ammunition, and ordered the enrollment of 20,000 “minute men,” who were to hold themselves ready to answer any call at a minute’s notice.

General Thomas Gage was the British commander in Boston, and he was so alarmed by the aggressive acts of the Americans that he began to throw up fortifications on the neck of land connecting the town with the mainland. His alert spies notified him that the Americans had collected a quantity of military supplies which were stored at Concord, some 20 miles from Boston. Gage ordered 800 troops to march secretly to Concord and destroy them. 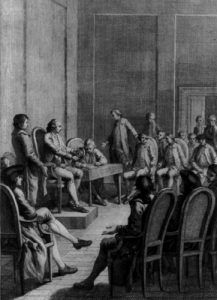 Guarded as were the movements of the British, the Americans were equally watchful and discovered them. Paul Revere dashed out of the tow50 minutemen gathered on the village green. Major Pitcairn ordered them to disperse, and when they refused to do so, a volley was fired. Eight Americans were killed and a large number wounded, the others fleeing before the overwhelming force. Thus was the shot fired that “was heard round the world.”

The British advanced to Concord, destroyed the stores there, and then began their return to Boston. All the church bells were ringing and the minutemen were swarming around the troops from every direction. They kept up a continuous fire upon the soldiers from behind barns, houses, hedges, fences, bushes, and from the open fields. The soldiers broke into a run, but everyone would have been shot down had not Gage sent reinforcements, which protected the exhausted fugitives until they reached a point where they were under the guns of the men-of-war. In this first real conflict of the war, the Americans lost 88 and the British 273 in killed, wounded and missing. General Gage was now besieged in Boston by the ardent minutemen, who in the flush of their patriotism were eager for the regulars to come out and give them a chance for a battle. Men mounted on swift horses rode at headlong speed through the colonies, spreading the stirring news, and hundreds of patriots hurried to Boston that they might take part in the war for their rights. Elsewhere, the fullest preparations were made for the struggle for independence which all felt had opened.

As agreed upon, the Second Continental Congress assembled in Philadelphia on May 10, 1775. It included some of the ablest men in America, such as George Washington, Thomas Jefferson, Patrick Henry, Richard Henry Lee, and Peyton Randolph, of Virginia; Benjamin Franklin and Robert Morris, of Pennsylvania; John Adams, Samuel Adams, and John Hancock, of Massachusetts; John Jay, of New York; and Roger Sherman and Oliver Ellsworth, of Connecticut. The former Congress had talked; the present acted. By general consent, it was accepted as the governing body of the colonies. The forces around Boston were declared to be a Continental Army, money was voted to support it, and Washington was appointed its commander.

Meanwhile, British reinforcements under William Howe, Henry Clinton, and John Burgoyne arrived in Boston, swelling Gage’s army to 10,000 men. They occupied the town, on the peninsula which covers the middle of the harbor, while around them on the hills of the mainland was a larger force of Americans, without uniforms, poorly clothed, badly armed and undisciplined, but overflowing with patriotism.

A little to the north of Boston a second peninsula extended into the harbor. It has several elevations, one of which, Bunker Hill, the patriots determined to seize and fortify. Colonel William Prescott with a thousand men set out one dark night to perform the task, but, believing Breed’s Hill more desirable, since it was nearer Boston, he set his men to work upon that. (The name “Bunker” is more euphonious than “Breed’s,” and the latter is now generally known by the former name. Upon it has been built the Bunker Hill Monument.

Although close to the British sentinels, the Americans toiled through the night without discovery. When the sun rose on June 17, 1775, the enemy in Boston was astonished to see a line of entrenchments extending across the hill above them, with the Americans still working like beavers. They continued without interruption until noon, when the British were seen coming across the harbor in boats. They were the regulars, finely disciplined and numbered nearly 3,000, who, landing near Charlestown, formed in fine order and advanced with precision against the 1,500 patriots, eagerly waiting for them behind their entrenchments.

It was about the middle of the afternoon that the British columns marched to the attack, covered by a heavy fire of cannon and howitzers, Howe himself commanding the right wing. the steeples and roofs of Boston swarmed with people, breathlessly watching the thrilling sight. Charles town had been fired and four hundred of its houses laid in ashes.

The Americans behind their breastworks were impatient to open fire, but Prescott restrained them until they could “see the whites of the eyes” of their enemies. Then in a loud, clear voice he shouted “Fire!” There was an outflame of musketry along the front of the entrenchments, and scores of troops in the first rank fell. The others hesitated a moment, and then turned and fled down the slope. There, their officers formed them into line, and once more they advanced up the slope. The delay gave the Americans time to reload, and they received the troops with the same withering fire as before, sending them scurrying to the bottom of the hill, where, with great difficulty, the daring officers formed them into line for a third advance. The British cannon had been brought to bear, and the ships and batteries maintained a furious cannonade. The patriots were compelled to withdraw from the breastwork outside the fort, and the redoubt was attacked at the same moment from three sides. The spectators were confident of seeing the invaders hurled back again, but saw to their dismay a slackening of the fire of the Americans, while the troops, rushing over the entrenchments, fought with clubbed muskets.

At the very moment victory was within the grasp of the patriots, their recklessly fired ammunition gave out, and they began sullenly retreating, fighting with clubbed weapons. As it was, their retreat would have been cut off, had not a company of provincials checked the British until the main body of Americans had fallen back. The battle of Bunker Hill was over and ended with the defeat of the patriots, who had lost 150 killed, 270 wounded, and 30 taken prisoners. General Gage gave his loss as 224 killed and 830 wounded. Among the killed was Major John Pitcairn, the leader of the English troops who fired upon the minutemen at Lexington. The American Colonel Prescott had his clothing torn to shreds by bayonet thrusts but was not hurt. A British officer, recognizing the brilliant Warren, snatched a musket from the hands of a soldier and shot him dead.