To a spiritless meek and brave, the darker shades of the picture would have obscured these cheerful gleams; for the situation was lonely, and the inconveniences innumerable. But Elizabeth easily triumphed over all obstacles, by practical good sense and by the quick promptings of her ingenuity. She was one of those clear, strong natures, who always have a definite aim in view, and who see at once the means best suited to the end. Her first inquiry was, what grain was best adapted to the soil of her farm; and being informed that rye would yield the best, “Then I shall eat rye bread,” was the answer.

When winter came, and the gleaming snow spread its unbroken silence over hill and plain, was it not dreary then? It would have been dreary indeed to one who entered upon this mode of life for mere love of novelty, or a vain desire to do something extraordinary. But the idea of extended usefulness, which had first lured this remarkable girl into a path so unusual, sustained her through all her trials. She was too busy to be sad and leaned too trustingly on her Father’s hand to be doubtful of her way. The neighboring Indians soon loved her as a friend, for they always found her truthful, just, and kind. From their teachings, she added much to her knowledge of simple medicines. So efficient was her skill, and so prompt’ her sympathy, that for many miles around, if a man, woman, or child were alarmingly ill, they were sure to send for Elizabeth Haddon; and wherever she went, her observing mind gathered some hint for the improvement of farm or dairy. Her house and heart were both large, and as her residence was on the way to the Quaker meeting-house in Newtown, it became a place of universal resort to Friends from all parts of the country traveling that road, as well as an asylum for benighted wanderers.

Late one winter’s evening a tinkling of sleigh-bells was heard at the entrance of the clearing, and soon the hoofs of horses were crunching the snow as they passed through the great gate towards the barn. The arrival of strangers was a common occurrence, for the home of Elizabeth Haddon was celebrated far and near as the abode of hospitality. The toil-worn or benighted traveler there found a sincere welcome, and none who enjoyed that friendly shelter and abundant cheer ever departed without regret. But now there was an unwonted stir in that well-ordered family; great logs were piled in the capacious fireplace, and hasty preparations were made as if to receive guests who were more than ordinarily welcome. Elizabeth, looking from the window, had recognized one of the strangers in the sleigh as John Estaugh, with whose preaching years before in London she had been deeply impressed, and ever since she had treasured in her memory many of his words. It was almost like a glimpse of her dear old English home to see him enter, and stepping forward with more than usual cordiality she greeted him, saying,

“Thou art welcome, friend Estaugh, the more so for being entirely unexpected.”

“And I am glad to see thee, Elizabeth,” he replied, with a friendly shake of the hand, “it was not until after I had landed in America that I heard the Lord had called thee hither before me; but I remember thy father told me how often thou hadst played the settler in the woods, when thou was quite a little girl.”

“I am but a child still,” she replied, smiling.

“I trust thou art,” he rejoined; “and as for those strong impressions in childhood, I have heard of many cases when they seemed to be prophecies sent from the Lord. When I saw thy father in London, I had even then an indistinct idea that I might sometime be sent to America on a religious visit.”

“And hast thou forgotten, friend John, the ear of Indian corn which my father begged of thee for me? I can show it to thee now. Since then I have seen this grain in perfect growth; and a goodly plant it is, I assure thee. See,” she continued, pointing to many bunches of ripe corn which hung in their braided husks against the wall of the ample kitchen; “all that, and more, came from a single ear, no bigger than the one thou didst give my father. May the seed sown by thy ministry be as fruitful!” “Amen,” replied both the guests. 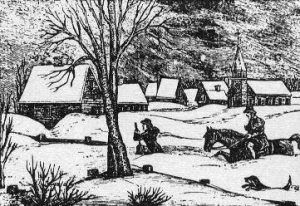 That evening a severe snow-storm came on, and all night the blast howled round the dwelling. The next morning it was discovered that the roads were rendered impassable by the heavy drifts. The home of Elizabeth had already been made the center of a settlement composed mainly of poor families, who relied largely upon her to aid them in cases of distress. That winter they had been severely afflicted by the fever incident to a new settled country, and Elizabeth was in the habit of making them daily visits, furnishing them with food and medicines.

The storm roused her to an even more energetic benevolence than ordinary. Men, oxen, and sledges were sent out, and pathways were opened; the whole force of Elizabeth’s household, under her immediate superintendence, joining in the good work. John Estaugh and his friend tendered their services joyfully, and none worked harder than they. His countenance glowed with the exercise, and a cheerful childlike out-beaming honesty of soul shone forth, attracting the kind but modest regards of the maiden. It seemed to her as if she had found in him a partner in the good work which she had undertaken.

When the paths had been made, Elizabeth set out with a sled-load of provisions to visit her patients, and John Estaugh asked permission to accompany her. While they were standing together by the bedside of the aged and suffering, she saw her companion in a new and still more attractive guise. His countenance expressed a sincerity of sympathy warmed by rays of love from the Sun of mercy and righteousness itself. He spoke to the feeble and the invalid words of kindness and consolation, and his voice was modulated to a deep tone of tenderness, when he took the little children in his arms.

The following “first day,” which world’s people call the Sabbath, a meeting was attended at Newtown by the whole family, and then John Estaugh was moved by the Spirit to speak words that sank into the hearts of his hearers. It was a discourse on the trials and temptations of daily life, drawing a contrast between this course of earthly probation, with its toils, sufferings, and sorrows, and that higher life, with its rewards to the faithful beyond the grave.

Elizabeth listened to the preacher with meek attention; he seemed to be speaking to her, for all the lessons of the discourse were applicable to herself. As the deep tones of the good man ceased to vibrate in her ears, and there was stillness for a full half hour in the house, she pondered over it deeply. The impression made by the young preacher seemed to open a new window in her soul; he was a God-sent messenger, whose character and teachings would lift still higher her life, and sanctify her mission with a holier inspiration.

A few days of united duties and oneness of heart made John and Elizabeth more thoroughly acquainted with each other than they could have been by years of ordinary fashionable intercourse.

They were soon obliged to separate, the young preacher being called to other meetings of his sect in New Jersey and Pennsylvania. When they bade each other farewell, neither knew that they would ever meet again, for John Estaugh’s duty might call him from the country ere another winter, and his avocations in the new world were absorbing and continuous. With a full heart, but with the meekness characteristic of her sect, Elizabeth turned away to her daily round of good works with a new and holier zeal.