Mrs. Daviess was another of these women who, like Mrs. Williamson, was a born heroine, of whom there were many who acted a conspicuous part in the territorial history of Kentucky. Large and splendidly formed, she possessed the strength of a man with the gentle loveliness of the true woman. In the hour of peril, and such hours were frequent with her, she was firm, cool, and fertile of resource; her whole life, of which we give only a few episodes, was one continuous succession of brave and noble deeds. Both she and Mrs. Williamson appear to have been real instances of the poet’s ideal:

To warn, to comfort, and command.”

Her husband, Samuel Daviess, was an early settler at Gilmer’s Lick, in Lincoln County, Kentucky. In August 1782, while a few rods from his house, he was attacked early one morning by an Indian, and attempting to get within doors he found that his house was already occupied by the other Indians. He succeeded in making his escape to his brother’s station, five miles off, and giving the alarm was soon on his way back to his cabin in company with five stout, well-armed men. 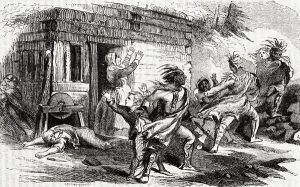 Meanwhile, the Indians, four in number, who had entered the house while the fifth was in pursuit of Mr. Daviess, roused Mrs. Daviess and the children from their beds and gave them to understand that they must go with them as prisoners. Mrs. Daviess occupied as long a time as possible in dressing, hoping that some relief would come. She also delayed the Indians nearly two hours by showing them one article of clothing and then another, explaining their uses and expatiating on their value.

While this was going on the Indian who had been in pursuit of her husband returned with his hands stained with pokeberries, waving his tomahawk with violent gestures as if to convey the belief that he had killed Mr. Daviess. The keen-eyed wife soon discovered the deception and was satisfied that her husband had escaped uninjured.

After plundering the house, the Indians started to depart, taking Mrs. Daviess and her seven children with them. as some of the children were too young to travel as rapidly as the Indians wished, and discovering, as she believed, their intention to kill them, she made the two oldest boys carry the two youngest on their backs.

In order to leave not rail behind them, the Indians traveled with the greatest caution, not permitting their captives to break a twig or weed as they passed along and to expedite Mrs. Daviess’ movements one of them reached down and cut off with his knife a few inches of her dress.

Mrs. Daviess was accustomed to handling a gun and was a good shot, like many other women on the frontier. She contemplated as a last resort that, if not rescued in the course of the day, when night came and the Indians had fallen asleep, she would deliver herself and her children by killing as many of the Indians as she could, believing that in a night attack the rest would fly panic-stricken.

Mr. Daviess and his companions reached the house and finding it empty, succeeded in striking the trail of the Indians and hastened in pursuit. They had gone but a few miles before they overtook them. Two Indian spies in the rear first discovered the pursuers, and running on overtook the others and knocked down and scalped the oldest boy, but did not kill him. The pursuers fired at the Indians but missed. The latter became alarmed and confused, and Mrs. Daviess taking advantage of this circumstance jumped into a skink-hole with her infant in her arms. The Indians fled and every child was saved.

Kentucky in its early days, like most new countries, was occasionally troubled with men of abandoned character, who lived by stealing the property of others, and after committing their depredations, retired to their hiding places, thereby eluding the operation of the law. One of these marauders, a man of desperate character, who had committed extensive thefts from Mr. Daviess, as well as from his neighbors, was pursued by Daviess and a party whose property he had taken, in order to bring him to justice. 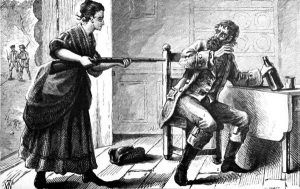 While the party was in pursuit, the suspected individual, not knowing that anyone was pursuing him, came to the house of Daviess, armed with his gun and tomahawk, — no person being at home but Mrs. Daviess and her children. After he had stepped into the house, Mrs. Daviess asked him if he would drink something; and having set a bottle of whiskey upon the table, requested him to help himself. The fellow not suspecting any danger, set his gun by the door, and while he was drinking Mrs. Daviess picked it up, and placing herself in the doorway had the weapon cocked and leveled upon him by the time he turned around, and in a peremptory manner ordered him to take a seat or she would shoot him. Struck with terror and alarm, he asked what he had done. She told him he had stolen her husband’s property and that she intended to take care of him herself. In that condition, she held him, prisoner, until the party of men returned and took him into their possession.

These are only a few out of many similar acts which show the character of Mrs. Daviess. She became noted all through the frontier settlements of that region during the troublous times in which she lived, not only for her courage and daring but for her shrewdness in circumventing the stratagems of the wily Indians by whom her family was surrounded. Her oldest boy inherited his mother’s character and promised to be one of the most famous Indian fighters of his day when he met his death at the hands of his Indian foes in early manhood.

If Mrs. Williamson and Mrs. Daviess were representative women in the more stormy and rugged scenes of frontier life, Mrs. Elizabeth Estaugh may stand as a true type of the gentle and benevolent matron, brightening her forest home by her kindly presence, and making her influence felt in a thousand ways for good among her neighbors in the lonely hamlet where she chose to live.