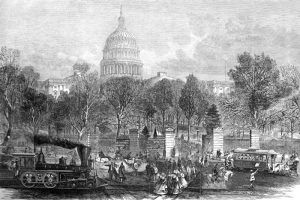 Washington Congress adjourning for the day, 1866.

Then, finally, there was a political reason why the Republican Congress which assembled in December 1865, should not admit the men sent to it. These men were almost all Democrats, and as hostile to the “Black Republican” party as they had been in 1856 and 1860. Combined with the Democrats and “copperheads” of the North, who had opposed the war, they might prove numerous enough to oust the Republicans from power. The party which had saved the country must rule it said the Republican orators.

Moved by these reasons, Congress, instead of admitting the Southern members, appointed a committee of 15 men to investigate the condition of the late seceded states and recommend on what terms they should be restored to their full privileges in the Union. Naturally, Johnson was offended that Congress should ignore or undo his work; and he immediately assumed a tone of hostility to the leaders of Congress. He was course when making a speech from the balcony of the White House in January, 1866, to attack Charles Sumner, Thaddeus Stevens, and Wendell Phillips by name, accusing them of seeking to destroy the rights of the Southern states and to rob the President of his legal powers under the Constitution, and even to encourage his assassination. When Congress, in the early months of 1866, passed bills to protect the blacks against the hostile legislation of the Southern states, Johnson vetoed the bills. But, Congress was strong enough to pass them over his veto. The battle was then fairly joined between the President and Congress, and it boded ill for the prospects of peace and order in the South. 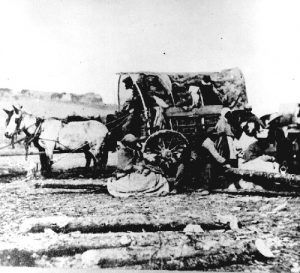 On April 30, 1866, the committee of 15 reported. It recommended a new amendment to the Constitution (the 14th Amendment) which should guarantee the civil rights of the black citizen of the South, reduce the representation in Congress of any state which refused to let them vote and disqualify the leaders of the Confederacy from holding federal or state office. This last provision, which deprived the Southern leaders of their political rights, assumed that these men were not reconciled to the Union. But, the rest of the Fourteenth Amendment was a fair basis for the Reconstruction of the Southern states. Congress passed the amendment on June 13, 1866, and Secretary of State, William Seward sent it to the states for ratification.

While Congress did not explicitly promise that it would admit the representatives and senators of the states which ratified the 14th Amendment, it doubtlessly would have done so. For, when Tennessee ratified it in July 1866, that state was promptly restored to its full privileges in the Union. The other states of the secession might well have followed the lead of Tennessee; but every one of them, indignant at the disqualifying clause, overwhelmingly rejected the amendment. It thus failed to secure the votes of three-fourths of the states of the Union, necessary for its ratification.

Congress, angered by this conduct on the part of the South, decided to take the Reconstruction of the states of the secession entirely into its own hands. The elections of 1866, which had taken place while the 14th Amendment was before the people, had resulted in an overwhelming victory for the congressional party of Thaddeus Stevens and Charles Sumner over the President’s supporters. President Johnson himself had contributed to the defeat of his policies by encouraging the Southern states to reject the 14th Amendment, and by making a series of outrageous speeches in the West during the autumn of 1866, vilifying the congressional leaders and exalting his own patriotism and judgment.

Then, early in 1867, Congress, under the leadership of Thaddeus Stevens of Pennsylvania in the House, and of Sumner and Henry Wilson of Massachusetts in the Senate, devised a thorough plan for reconstructing the South. 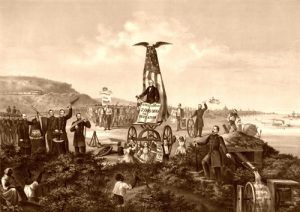 By the Reconstruction Act of March 2, 1867, the whole area occupied by the ten states which had rejected the 14th Amendment was divided up into five military districts, and a major general of the Union Army was put in command of each district. The Johnson administration governments of 1865 were swept away, and in their place, new governments were established under the supervision of the major generals and their detachments of United States troops.

The Reconstruction Act further provided that blacks should be allowed to participate both in framing the new constitutions and in running the new governments, while at the same time, their former masters were, in large numbers, disqualified. The act also provided that, when the new state governments ratified the 14th Amendment, and that the amendment becomes part of the Constitution of the United States, then these states could be restored to their place in the Union. 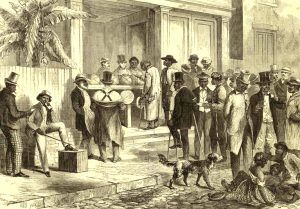 Thus, by the Reconstruction Act of 1867, Congress literately forced African-American suffrage on the South at the point of the bayonet. It was a violent measure for Congress to adopt, even though the conduct of the states of the secession in rejecting the 14th Amendment was sorely provoking. The blacks outnumbered the whites in the states of South Carolina, Alabama, Florida, Louisiana, and Mississippi and the South particularly resented the fact that blacks in the North were allowed to vote in only six states, where they counted as the tiniest fraction of the population. Ohio, in the very year Congress was forcing African-American suffrage on the South (1867), rejected by over 50,000 votes the proposition to give the ballot to the few blacks of that state. Conceding that Congress had the right to impose black suffrage on the South as a conqueror’s privilege, it was nevertheless a most unwise thing to do at the time. Resentment was extremely high as the people of the South felt that Congress was setting up freed slaves to be in power over their former masters, which did not ensure the protection of black rights or the stability and peace of the Southern governments.

The governments of North and South Carolina, Georgia, Florida, Alabama, Mississippi, Louisiana, Arkansas, and Texas, formed under the military domination of the Reconstruction Acts, were very inefficient. Without education or experience, African-Americans were suddenly thrust into positions of high political office. Others in office included carpetbaggers, a negative term Southerners gave to those who moved to the South during the Reconstruction era. Many of these relocated northerners were motivated by questionable objectives including buying up plantations at extremely reduced prices. 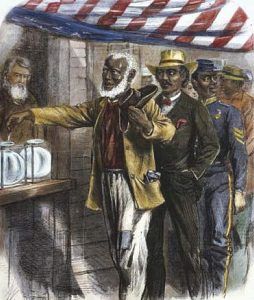 Other government members included southern whites who supported Reconstruction, referred to as scalawags. Prompted by their unscrupulous carpetbagger friends and scalawag backers, the African-American members could be counted on to vote the Republican ticket, which was enough for most of the advocates of Reconstruction. The Carpetbaggers and Scalawags were said to have politically manipulated and controlled former Confederate states for varying periods for their own financial and power gains.

But, for the exhausted Southern states, already amply “punished ” by the desolation of war, the rule of these initial governments of 1868 was an indescribable state of extravagance, fraud, and incompetence, — a travesty on government. Instead of wise, conservative legislatures, which would encourage industry, keep down expenditures, and build up the shattered resources of the South, there were ignorant groups of men in the state capitals, dominated by unprincipled politicians, who plunged the states further and further into debt by voting themselves enormous salaries, and by spending lavish sums of money on railroads, canals, and public buildings and works, for which they reaped hundreds of thousands of dollars in kickbacks.

Such governments could not of course last, unless supported by Northern bayonets; and the Republican carpetbag politicians in the South were not slow to call upon the Republican administration at Washington for detachments of troops whenever their supremacy was threatened. Deprived by force of any legal means of defense against this reprehensible kind of government, the South resorted to intimidation and persecution of the blacks. Secret organizations, called the Ku-Klux Klan, made up mostly of young men, took advantage of the black man’s superstitious nature to force him back into the humble social position which he held before the war. The members of the Ku Klux on horseback, with man and horse, robed in ghostly white sheets, spread terror at night through African-American quarters and posted on trees and fences horrible warnings to the carpetbaggers and scalawags to leave the country soon if they wished to live.