In spite of Lord Baltimore’s protests, the land had been held as a part of New York ever since the English “conquest” of 1664. This territory called the “Three Lower Counties,” Penn governed by a deputy. The Lower Counties were separated from Pennsylvania in 1702 and, under the name of the colony of Delaware, were given their own legislature; but, they remained a part of the proprietary domain of the Penn family until the American Revolution. 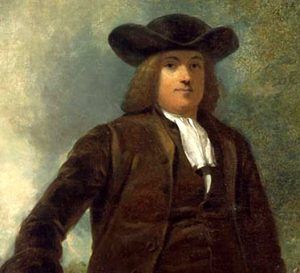 Penn offered attractive terms to settlers. The land was sold at ten dollars for 100 acres, complete religious freedom was allowed, a democratic assembly was summoned, and the Delaware Indians, already humbled by their northern foes, the Iroquois, were rendered still less dangerous by Penn’s fair dealing with them. Emigrants came in great numbers, especially the Protestants from the north of Ireland, who were annoyed by cruel landlords and oppressive trade laws, and the German Protestants of the Rhine country, against whom Louis XIV of France was waging a crusade. In the first half of the 18th century, the population of Pennsylvania grew from 20,000 to 200,000. Philadelphia, which Penn had planned in 1683, soon outstripped New York in population, wealth, and culture and remained throughout the eighteenth century the leading city in the American colonies. Its neat brick houses, its paved and lighted streets, its printing presses, schools, hospital, asylum, library, a philosophical society, and university, all testified to the enlightenment and humanity of Penn’s colony, and especially to the genius and industry of its leading citizen, the celebrated Benjamin Franklin.

William Penn was the greatest of the founders of the American colonies. He had all the liberality of Roger Williams without his impetuousness, all the fervor of John Winthrop without a trace of intolerance, all the tact of Lord Baltimore with still greater industry and zeal. He was far in advance of his age in humanity. At a time when scores of offenses were punishable by death in England, he made murder the only capital crime in his colony. Prisons generally were filthy dungeons, but Penn made his prisons workhouses for the education and correction of malefactors. His province was the first to raise its voice against slavery in the Germantown protest of 1688, and his humane treatment of the Indians has passed into the legend of the spreading elm and the wampum belts familiar to every American school child. When Penn’s firm hand was removed from the province in 1712, disputes increased between governor and assembly over taxes, land transfers, trade, and defense; but the colony remained in the possession of the Penn family throughout the American colonial period. 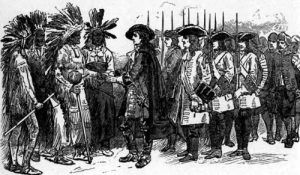 Among these proprietorships was also the colony of Georgia, although it was founded long after the Stuart dynasty had given place to the House of Hanover on the English throne. In 1732, James Oglethorpe obtained from the king a charter granting to a body of trustees, for 21 years, the government of that unsettled part of the old Carolina territory lying between the Savannah and Altamaha Rivers. Oglethorpe, who, as chairman of a parliamentary committee of investigation, had been horrified by the condition of English prisons, wished to provide an opportunity for poor debtors and criminals to work out their salvation in the New World. The Church was anxious for the conversion of the Indians on the Carolina borders.

Capitalists expected to make large profits out of the industries of silk and wine introduced into the province. And, the government, drifting already toward the war with Spain, which was declared in 1739, was glad to have the English frontier extended southward toward the Spanish settlement of Florida. So Parliament, the Society for the Propagation of the Gospel in Foreign Parts, the Bank of England, and many private citizens contributed toward the new colony, which was established on the banks of the Savannah River in 1733 and named Georgia after the reigning king, George II. Slavery was at first forbidden in the new colony, as well as the traffic in rum, which was a disgrace to the New England colonies of Massachusetts and Rhode Island. But, the colony did not prosper. The convicts were poor workers. The industries started were unsuited to the land. Not wine and silk, but rice and cotton, were destined to be the foundation of Georgia’s prosperity. Oglethorpe battled valiantly for his failing colony and defeated the Spaniards on land and sea, but, the trustees had to surrender the government to the king in 1752. The founder of the last American colony lived to see the United States acknowledged by Great Britain and the other powers of Europe as an independent nation.

About the Article: This article was, for the most part, written by David Saville Muzzey and included in a chapter of his book, “An American History,” published in 1920 by Ginn and Co.  However, the original content has been heavily edited, truncated in parts, and additional information added.