Here in America we are descended in blood and in spirit from revolutionists and rebels – men and women who dare to dissent from accepted doctrine. As their heirs, may we never confuse honest dissent with disloyal subversion. — Dwight D. Eisenhower

And I’m proud to be an American,
where at least I know I’m free.
And I won’t forget the men who died,
who gave that right to me.

From every mountain side
Let Freedom ring.

It is the love of country that has lighted and that keeps glowing the holy fire of patriotism. — J. Horace McFarland, Proponent of civic improvement, environmental conservation, and beautification of America

A man’s country is not a certain area of land, of mountains, rivers, and woods, but it is a principle; and patriotism is loyalty to that principle. — George William Curtis, American writer and public speaker

When an American says that he loves his country, he means not only that he loves the New England hills, the prairies glistening in the sun, the wide and rising plains, the great mountains, and the sea. He means that he loves an inner air, an inner light in which freedom lives and in which a man can draw the breath of self-respect. —  Adlai Stevenson, American politician

America is a passionate idea or it is nothing. America is a human brotherhood or it is chaos. —  Max Lerner, American journalist and educator

If you are ashamed to stand by your colors, you had better seek another flag. —  Author Unknown

He loves his country best who strives to make it best. —  Robert G. Ingersoll, American Statesman and Orator

My God! How little do my countrymen know what precious blessings they are in possession of, and which no other people on earth enjoy! —  Thomas Jefferson, 3rd US President and Author of the Declaration of Independence

I think there is one higher office than president and I would call that patriot. —  Gary Hart, American politician

I pledge allegiance to the flag of the United States of America, and to the Republic for which it stands. One nation under God, indivisible, with liberty and justice for all. — The Pledge Of Allegiance, by Francis Bellamy 1892

A patriot must always be ready to defend his country against his government. — Edward Abbey, American writer

We can’t all be Washingtons, but we can all be patriots. —  Charles F. Browne, American writer 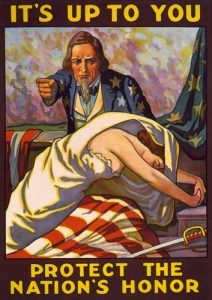 Sure I wave the American flag. Do you know a better flag to wave? Sure I love my country with all her faults. I’m not ashamed of that, never have been, never will be. — John Wayne, actor

The things that the flag stands for were created by the experiences of a great people. Everything that it stands for was written by their lives. The flag is the embodiment, not of sentiment, but of history.” — Woodrow Wilson, 28th U.S. President

We Recognize No Sovereign but God, and no King but Jesus! — John Adams and John Hancock, Founding Fathers

All must admit that the reception of the teachings of Christ results in the purest patriotism, in the most scrupulous fidelity to public trust, and in the best type of citizenship.” – Grover Cleveland, the 22nd and 24th U.S. President

I shall know but one country. The ends I aim at shall be my country’s, my God’s and Truth’s. I was born an American; I live an American; I shall die an American. — Daniel Webster, American Statesman and politician in the 19th Century

Compiled and edited by Kathy Weiser/Legends of America, updated July, 2015.