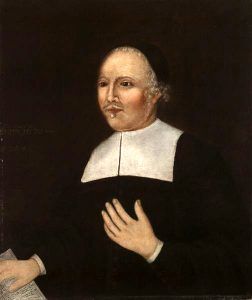 John Davenport, a stern Puritan man, founded a third seceding colony from Massachusetts when he took his congregation from Boston to the shores of Long Island Sound and started the settlement of New Haven in 1638. The colony, which soon expanded into several towns, was even more strictly Puritan than Massachusetts.

The founders hoped to add worldly prosperity to their piety by making New Haven a great commercial port, but the proximity of the unrivaled harbor of New York rendered any such hope in vain from the beginning. Instead of becoming an independent commercial colony, New Haven and her sister towns found themselves, to their disgust, included in the limits of Connecticut by the royal charter of 1662. They protested valiantly against the consolidation but were forced, in the end, to yield. Thus the New Haven colony ceased to exist in 1665.

With the process of radiation from Massachusetts of colonies to the south and west, went a contrary process of absorption by Massachusetts of settlements to the north and east. Ferdinando Gorges was the father of these settlements and he was a deadly enemy of Massachusetts. As a courtier, he opposed the reforming party in Parliament, and as a staunch Church of England man, he hated the whole Puritan movement.

He secured a royal charter in 1639 which made him proprietor of Maine and labored strenuously to have strong anti-Puritan settlers emigrate to his province and to New Hampshire, the neighboring province of his fellow courtier and fellow churchman, John Mason. Massachusetts, whose territory, by the charter of 1629, extended from three miles north of the Merrimac River to three miles south of the Charles River, laid claim to these settlements. She annexed the New Hampshire towns in 1641-1643 and, after a long quarrel over the Maine towns, finally bought the claims of Gorges’s heirs for £1250 in 1677. King Charles II was incensed at the transaction. In 1679 he separated New Hampshire from Massachusetts and gave it a royal governor, but Maine remained part of the Bay Colony and then of the Bay State until 1820. 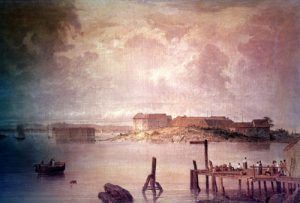 The domination of Massachusetts over the other New England colonies, at least up to the time when Connecticut and Rhode Island received their charters, was complete. She far surpassed them all in men and wealth. The New England Confederation, formed in 1643 by Massachusetts, Plymouth, Connecticut, and New Haven, chiefly for defense against the Indians and the Dutch, was theoretically a league of four equal states, each having two members with an equal voice in the governing council. But, the opposition of Massachusetts kept Rhode Island out of the confederation, and in the question of declaring war on the Dutch colony of New Netherland in 1653, the two Massachusetts councilors vetoed the unanimous vote of the other six.

The second half of the seventeenth century exhibited the character of the colony in its most uncompromising and unlovely aspects. The large-minded, courteous Winthrop died in 1649 and was succeeded in the governorship by a harsh and bigoted Puritan “saint” named John Endicott. 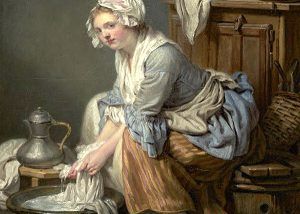 An artist’s depiction of Mary Johnson, the first recorded confession of witchcraft in Connecticut

Faithfulness to Puritan ideals reached a point of fanatic cruelty. Witch hunts began in Connecticut in 1647. Quakers were hanged in 1660 on Boston Common for the crime of testifying to the “inner light,” or special divine revelation. Again, in 1692, 19 persons, mostly women, were hanged in Salem Village for witchcraft, or secret alliance with Satan, on the most unfair evidence of excited children and hysterical women.

On its political side, the increasing power of the magistrates of Massachusetts aroused the angry suspicions of the king. The colony banished Episcopalians, coined money, omitted the king’s name in its legal forms, and broke his laws for the regulation of .their trade. When he sent commissioners in 1664 to investigate these conditions, they were insulted by a constable in a Boston tavern. Their chairman wrote back, “Our time is lost upon men puffed up with the spirit of independence.” Edward Randolph sent over a few years later as a collector of revenues complained that “the king’s letters are of no more account in Massachusetts than an old number of the London Gazette.” Finally, King Charles II, provoked beyond patience, had the Massachusetts charter annulled in his court in 1684 and the colony became a royal province.

But, before the great Puritan colony entered on its checkered career of the 18th century under royal governors, it bore a conspicuous part in overthrowing of the tyranny which the last Stuart King, James II, made unendurable for freeborn Englishmen. In 1686, James united New York, New Jersey, and all New England into one great province, which should have been a solid bulwark against the danger of French and Indian invasion from the north. The King also felt that his governor should rule absolutely, unhampered by colonial charters or assemblies. He sent over Sir Edmund Andros as governor of this huge province extending from Delaware Bay to Nova Scotia. Andros was a faithful servant and an upright man, but a harsh, narrow, unbending governor, determined that the instructions of his royal master should be carried out to the letter. He attempted to seize the charters of Connecticut and Rhode Island but was baffled by the local patriots in both colonies. Exasperated by resistance, Andros made his hand doubly heavy upon Massachusetts. He dismissed the assembly, abolished the colonial courts, dispensed justice himself, charged exorbitant fees, established strict censorship of the press, introduced Episcopal worship in Boston, denied the colonists fair and speedy trials, and levied a land tax on them without the consent of their deputies.

The patience of the colony was about exhausted when the welcome news arrived in April 1689, that King James II had been driven from the English throne. The inhabitants of Boston immediately responded by a popular rising against James’s odious servant. Andros tried, like his master, to flee from the vengeance of the people he had so grievously provoked, but he was seized and imprisoned, and later sent back to England. The town meeting of Boston assumed the government, appointed a committee of safety, and sent envoys to London to learn the will of the new king, William of Orange. Thus the “Glorious Revolution” of 1689 in Massachusetts was truly a part of the English Revolution of 1688 and a foreshadowing of the greater Revolution that would begin 86 years later by the descendants of the men who expelled Andros. 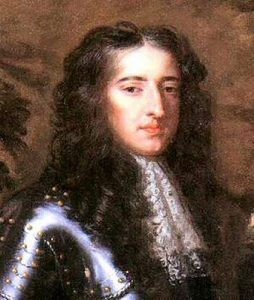 King William III granted a new charter to Massachusetts in 1691, while Connecticut and Rhode Island quietly resumed government under their old charters, retaining them as state constitutions well into the nineteenth century.

The new Massachusetts charter provided for the union of Plymouth and Maine with the Bay Colony under a royal governor and broke down the old Puritan regime by guaranteeing freedom of worship to all Protestant sects and making the possession of the property, instead of membership in the church, the basis of political rights. Under this charter, the Massachusetts colony lived until the American Revolution.

About the Article: This article was, for the most part, written by David Saville Muzzey and included in a chapter of his book, “An American History,” published in 1920 by Ginn and Co.  However, the original content has been heavily edited, truncated in parts, and additional information added.