Amid the multifarious toils of pioneer-life, woman has often proved that she is the last to forget the stranger that is within the gates. She welcomes the coming as she speeds the parting guest. Let us suppose travelers caught in a rainstorm, who reach at last one of these western homes. There is a roof, a stick chimney, drenched cattle crowding in beneath a strawy barrack, and some forlorn fowls huddling under a cart. The log-house is a small one, though its neat corn-crib and chicken-coop of slender poles bespeaks a careful farmer. No gate is seen, but great bars which are let down or climbed over, and the cabin has only a back door. 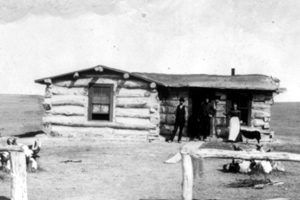 Within, everything ministers to the useful; nothing to the beautiful. Flitches of bacon, dried beef, and ham depend from the ceiling; pots and kettles are ranged in a row in the recess on one side the fireplace; and above these necessary utensils are plates and heavy earthen nappies. The ax and gun stand together in one corner. The good woman of the house is thin as a shadow and pinched and wrinkled with hard labor. Little boys and girls are playing on the floor like kittens.

A free and hospitable welcome is given to the travelers; their wet garments are ranged for drying on those slender poles usually seen above the ample fireplace of a log cabin in the West, placed there for the purpose of drying sometimes the week’s wash when the weather is rainy, sometimes whole rows of slender circlets of pumpkins for next spring’s pies, or festoons of sliced apples.

The good woman, after busying herself in those little offices which evince a desire to make guests welcome, puts an old cloak on her head and flies out to place tubs, pails, pans, and jars under the pouring eaves, intimating that as soap was scarce, she “must try and catch rainwater anyhow.”

The ” old man” has the shakes, so the woman has all to do; throws more wood on the fire and fans it with her apron; cuts rashers of bacon, runs out to the hen-coop and brings in new-laid eggs; mixes a johnnycake and sets it in a pan upon the embers.

While the supper is cooking the rain subsides to a sprinkle, and the travelers look at the surroundings of this pioneer household.

The cabin stands in a prairie, skirted by a forest. A stream gurgles by. The prairie is broken with patches of corn and potatoes, which are just emerging from the rich black mold. Pig-pens, a barn, and corn-houses, a half-dozen sheep in an enclosure, cows and calves and oxen in a barn-yard, a garden patch, and hen-coops, and stumps of what were once mighty trees, tell the story of the farmer’s labors; and the cabin, with all its appurtenances and surroundings, show how much the good woman has contributed to make it the abode of rustic plenty, all provided by the unaided toil of this pioneer couple.

They had come from the East ten years before, and their cabin was the initial point from which grew up a numerous settlement. Other cabins sent up their smoke in the prairie around them. A school-house and church had been built, and a saw-mill was at work on the stream nearby, and surveyors for a railroad had just laid out a route for the iron horse.

Two little boys come in now, skipping from school, and at the same time the good woman, who is all patience and civility, announces supper. Sage-tea, johnny-cake, fried eggs, and bacon, seasoned with sundry invitations of the hostess to partake freely, and then the travelers are in a mood for rest.

The sleeping arrangements are of a somewhat perplexing character. These are one large bed and a trundle bed; the former is given up to the travelers, the trundle bed suffices for the little ones; the hostess prepares a cotton sheet partition for the benefit of those who choose to undress, and then begins to prepare herself for the rest which she stands sorely in need of. She and her good man repose upon the floor, with buffalo robes for pillows, and with their feet to the fire.

The hospitality of the frontier woman is bounded only by their means of affording it. Come when you may, they welcome you; give you of their best while you remain, and regret your departure with simple and unfeigned sincerity. If you are sick, all that sympathy and care can devise is done for you, and all this is from the heart.

Homestead-life and woman’s influence therein is modified to some extent by the different races that contributed their quotas to the pioneer army. The early French settlements in our western States furnish a picture somewhat different from those of the emigrants of English blood: a patriarchal state of society, self-satisfied and kindly, with bright superficial features, but lacking the earnest purpose and restless aggressive energy of the Anglo-American, whose very amusements and festivals partook of a useful character.

Those French pioneer-women made thrifty and industrious housewives, and entered, with all the gaiety and enthusiasm of their race, into all the merry-makings and social enjoyments peculiar to those neighborhoods. On festive occasions, the blooming damsels wound round their foreheads fancy-colored handkerchiefs, streaming with gay ribbons, or plumed with flowers. The matrons wore the short jacket or petticoat. The foot was left uncovered and free, but on holidays it was adorned with the light moccasin, brilliant with porcupine quills, shells, beads, and lace.

A faithful picture of life in these French settlements possesses an indescribable charm, such as that conveyed by the perusal of Longfellow’s Acadian Romance of “Evangeline,” when we see in a border settlement the French maiden, wife, and widow.

Different types, too, of homestead-life are of course to be looked for in different sections. On the ocean’s beach, on the shores of the inland seas, on the banks of great rivers, in the heart of the forest, on the rugged hills of New England, on southern Savannas, on western prairies, or among the mountains beyond, the region, the scenery, the climate, the social laws may be diverse, yet homestead-life on the frontier widely varying as it does in its form and outward surroundings, is in its spirit everywhere essentially the same. The sky that bends overall, and the sun that sheds its light for all, are symbols of the oneness of the animating principle in the home where woman is the bright and potent genius.

We have spoken of the western form of homestead life because the frontier-line of to-day lies in the Occident. But in each stage of the movement that carried our people onward in their destined course from ocean to ocean, the wife and the mother were centers from which emanated a force to impel forward, and to fix firmly in the chosen abode those organisms of society which forms the molecular atoms out of which, “by the laws of our being, is built the compact structure of civilization.

In approximating towards some estimate of woman’s peculiar influence in those lonely and far-off western homes, we must not fail to take into account the humanizing and refining power which she exerts to soften the rugged features of frontier-life. Different classes of women all worked in their way towards this end.