Once, while sitting without a light, knitting, before the window, she saw three Indians approaching stealthily. Retreating to the hiding place beneath the floor, she heard them enter the cabin, and, having struck a light, proceed to help themselves to such eatables as they found in the pantry. After remaining for an hour in the house, and appropriating such articles as Indians most value, such as knives, axes, etc., they took their departure.

More elaborate fortresses were often necessary, and, for purposes of mutual defense in a country which swarmed with Indians, the settlers banded together and erected stations, forts, and block-houses. A station may be described as a series of cabins built on the sides of a parallelogram and united with palisades, so as to present on the outside a continuous wall with only one or two doors, the cabin doors opening on the inside into a common square.

A fort was a stockade enclosure embracing cabins, etc., for the accommodation of several families. One side was formed by a range of cabins separated by divisions or partitions of logs; the walls on the outside were ten or twelve feet high, with roofs sloping inward. Some of these cabins were provided with puncheon-floors, i.e., floors made of logs split in half and smoothed, but most of the floors were earthen. At the angles of these forts were built the blockhouses, which projected about two feet beyond the outer walls of the cabins and stockade; these upper stories were about 18 feet, or two inches every way larger than the under one, leaving an opening at the commencement of the second story, to prevent the enemy from making a lodgment under the walls.

These block-houses were devised in the early days of the first settlements made in our country and furnished rallying points for the settlers when attacked by the Indians. On the Western frontier, they were enlarged and improved to meet the military exigencies arising in a country which swarmed with Indians. In some forts, instead of block-houses, the angles were furnished with bastions; a large folding gate, made of thick slabs nearest the spring, closed the forts; the stockade, bastion, cabin, and block-house walls were furnished with port-holes at proper heights and distances. The whole of the outside was made completely bullet-proof; the families belonging to these forts were so attached to their own cabins on their farms that they seldom moved into the forts in the spring until compelled by some alarm, i.e. when it was announced by some murder that Indians were in the settlement.

We have described thus in detail the fortified posts established along the frontier for the purpose of showing that the life of the pioneer woman, from the earliest times, was, and now is, to a large extent, a military one. She was forced to learn a soldier’s habits and a soldier’s virtues. Eternal vigilance was the price of safety, and during the absence of the male members of the household, which were frequent and sometimes protracted, the women were on guard-duty and acted as the sentinels of their home fortresses. Watchful against stratagem as against violent attack, they passed many a night all alone in their isolated cabins, averting danger with all a woman’s fertility of resource, and meeting it with all the courage of a man.

On one occasion a party of Indians approached a solitary log-house with the intention of murdering the inmates. With their usual caution, one of their number was sent forward to reconnoiter, who, discovering the only persons within to be a woman, two or three children, and a black man, rushed in by himself and seized the man. The woman caught up the ax and with a single blow laid the savage warrior dead at her feet, while the children closed the door, and, with ready sagacity, employed themselves fastening it. The rest of the Indians came up and attempted to force an entrance, but the black and the children kept the door closed, and the intrepid mother, having no effective weapon, picked up a gun-barrel which had neither stock nor lock and pointed it at the savage? through the apertures between the logs. The Indians deceived by the appearance of a gun and daunted by the death of their companion, retired.

The station, the fort, and the block-house were the only refuge of the isolated settlers when the Indians became bolder in their attacks.

When the report of the four-pounder, or the ringing of the fort bell, or a volley of musketry sounded the alarm, the women and children hurried to the fortification. Sometimes, while threading the mazes of the forest, the hapless mother and her children would fall into an ambush. Springing from their cover, the prowling Indians would ply their tomahawks and scalping knives amid the shrieks of their helpless victims, or bear them away into a captivity more cruel than death. 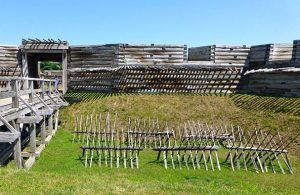 One summer’s afternoon, while Mrs. Folsom, with her babe in her arms, was hasting to Fort Stanwig in the Black River Country of New York, after hearing the alarm, she caught sight of a huge Indian lying behind a log, with his rifle leveled apparently directly at her. She quickly sprang to one side and ran through the woods in a course at right angles with the point of danger, expecting every moment to be pierced with a rifle ball. Casting a horror-stricken glance over her shoulder as she ran, she saw her husband hastening on after her, but directly under the Indian’s rifle. Shrieking loudly, she pointed to the savage just in time to warn her husband, who stepped behind a tree as the report of the rifle rang through the forest. In an instant, he drew a bead upon the lurking foe, who fell with a bullet through his brain.

Before the family could reach the fort a legion of Indians, roused by the report of the rifles, were on their trail. The mother and child fled swiftly towards their place of refuge, which they succeeded in reaching without harm; but the brave father, while trying to keep the Indians at bay, was shot and scalped almost under the walls of the fort.

Ann Bush, another of these border heroines, was still more unfortunate than Mrs. Folsom. While she and her husband were fleeing for safety to one of the stations on the Virginia borders, they were overtaken and captured by the Indians, who shot and scalped her husband; and although she soon escaped from captivity, yet in less than twelve months after, while again attempting to find refuge in the same station, she was captured a second time, with an infant in her arms. After traveling a few hours the Indians bent down a young hickory, sharpened it, seized the child, scalped it and spat it upon the tree; they then scalped and tomahawked the mother and left her for dead. She lay insensible for many hours, but it was the will of Providence that she should survive the shock. When she recovered her senses she bandaged her head with her apron, and, wonderful to tell, in two days staggered back to the settlement with the dead body of her infant.