History of the Passing of the 13th Amendment

We have enumerated with some detail the series of radical anti-slavery measures enacted at the second session of the Thirty-seventh Congress, which ended July 17, 1862, the abolition of slavery in the District of Columbia; the prohibition of slavery in the national Territories; the practical repeal of the fugitive slave law; and the sweeping measures of confiscation which in different forms decreed, forfeiture of slave property for the crimes of treason and rebellion. When this wholesale legislation was supplemented by the Presidents preliminary Emancipation Proclamation of September 22, 1862, and his final edict of freedom of January 1, 1863, the institution had clearly received its coup de grace in all except the loyal border States. Consequently the third session of the Thirty-seventh Congress ending March 4, 1863, occupied itself with this phase of the slavery question only to the extent of an effort to put into operation the Presidents plan of compensated abolishment. That effort took practical shape in a bill to give the State of Missouri fifteen millions on condition that she would emancipate her slaves; but the proposition failed, largely through the opposition of a few conservative members from Missouri, and the session adjourned without having by its legislation advanced the destruction of slavery.

When Congress met again in December, 1863, and organized by the election of Schuyler Colfax of Indiana as Speaker, the whole situation had undergone further change. The Union arms had been triumphant — Gettysburg had been won and Vicksburg had capitulated; Lincoln edict of freedom had become an accepted fact; fifty regiments of negro soldiers carried bayonets in the Union armies; Vallandigham had been beaten for governor in Ohio by a hundred thousand majority; the draft had been successfully enforced in every district of every loyal State in the Union. Under these brightening prospects, military and political, the more progressive spirits in Congress took up anew the suspended battle with slavery which the institution had itself invited by its unprovoked assault on the life of the Government.

The Presidents reference to the subject in his annual message was very brief:

The movements [said he] by State action for emancipation in several of the States not included in the Emancipation Proclamation are matters of profound gratulation. And while I do not repeat in detail what I have heretofore so earnestly urged upon this subject, my general views and feelings remain unchanged; and I trust that Congress will omit no fair opportunity of aiding these important steps to a great consummation.

His language had reference to Maryland, where during the autumn of 1863 the question of emancipation had been actively discussed by political parties, and where at the election of November 4, 1863, a legislature had been chosen containing a considerable majority pledged to emancipation. More especially did it refer to Missouri, where, notwithstanding the failure of the fifteen million compensation bill at the previous session, a State convention had actually passed an ordinance of emancipation, though with such limitations as rendered it unacceptable to the more advanced public opinion of the State. Prudence was the very essence of President Lincoln’s statesmanship, and he doubtless felt it was not safe for the Executive to venture farther at that time. We are like whalers, he said to Governor Morgan one day, who have been on a long chase: we have at last got the harpoon into the monster, but we must now look how we steer, or with one flop of his tail he will yet send us all into eternity.

Senators and members of the House, especially those representing anti-slavery States or districts, did not need to be so circumspect.

It was doubtless with this consciousness that J. M. Ashley, a Republican representative from Ohio, and James F. Wilson, a Republican representative from Iowa, on the 4th of December, 1863, that being the earliest opportunity after the House was organized, introduced, the former a bill and the latter a joint resolution to propose to the several States an amendment of the Constitution prohibiting slavery throughout the United States. Both the propositions were referred to the Committee on the Judiciary, of which Mr. Wilson was chairman; but before he made any report on the subject it had been brought before the Senate, where its discussion attracted marked public attention. 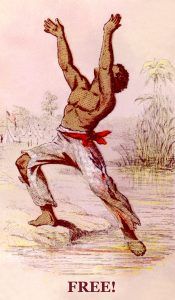 Senator John B. Henderson, who with rare courage and skill had, as a progressive conservative, made himself one of the leading champions of Missouri emancipation, on the 11th of January, 1864, introduced into the Senate a joint resolution proposing an amendment to the Constitution that slavery shall not exist in the United States.1 It is not probable that either he or the Senate saw any near hope of success in such a measure. The resolution went to the Senate Committee on the Judiciary, where it caused some discussion, but apparently without being treated as a matter of pressing importance. Nearly a month had elapsed when Mr. Sumner also introduced a joint resolution, proposing an amendment that Everywhere within the limits of the United States, and of each State or Territory thereof, all persons are equal before the law, so that no person can hold another as a slave. He asked its reference to the select committee on slavery, of which he was chairman; but several senators argued that such an amendment properly belonged to the Committee on the Judiciary, and in this reference Mr. Sumner finally acquiesced. It is possible that this slight and courteously worded rivalry between the two committees induced earlier action than would otherwise have happened, for two days later — February 10 — Mr. Trumbull, chairman of the Judiciary Committee, reported back a substitute in the following language, differing from the phraseology of both Mr. Sumner and Mr. Henderson:

SECTION 1. Neither slavery nor involuntary servitude, except as a punishment for crime, whereof the party shall have been duly convicted, shall exist within the United States, or any place subject to their jurisdiction.

SECT. 2. Congress shall have power to enforce this article by appropriate legislation.

Even after the Committee on the Judiciary by this report had adopted the measure, it was evidently thought to be merely in an experimental or trial stage, for more than six weeks elapsed before the Senate again took it up for action. On the 28th of March, however, Mr. Trumbull formally opened debate upon it in an elaborate speech. The discussion was continued from time to time until April 8. As the Republicans had almost unanimous control of the Senate, their speeches, though able and eloquent, seemed perfunctory and devoted to a foregone conclusion. Those which attracted most attention were the arguments of Reverdy Johnson of Maryland and Mr. Henderson of Missouri, senators representing slave States, advocating the amendment. Senator Sumner, whose pride of erudition amounted almost to vanity, pleaded earnestly for his phrase, All persons are equal before the law, copied from the Constitution of revolutionary France. But Mr. Howard of Michigan, one of the soundest lawyers and clearest thinkers of the Senate, pointed out the inapplicability of the words, and declared it safer to follow the Ordinance of 1787, with its historical associations and its well-adjudicated meaning.