His log cabin out in the clearing not far from the fort was a simple home with rude furnishings. A ladder against the wall was the stairway by which the children reached the loft. Pegs driven into the wall held the scanty family wardrobe, and upon a rough board, supported by four wooden legs, was spread the family meal.

There was an abundance of plain and simple food. Bear meat was a substitute for pork, and venison for beef. As salt was scarce, the beef was not salted down or pickled, but was jerked by drying in the sun or smoking over the fire. Corn was also an important article of diet. When away from home to hunt game or to follow the war trail, sometimes the only food which the settler had was the parched corn he carried in his pocket or wallet. Every cabin had its hand-mill for grinding the corn into meal and a mortar for beating it into hominy. The mortar was made by burning a hole into the top of a block of wood.

After building the fort, Boone returned to his home in North Carolina for his family. A few months later they returned. One day when Boone’s daughter and two girl friends were floating in a boat near the river bank, five Indians darted out of the woods and kidnapped the three girls. During their flight the Indians observed the eldest of the girls breaking twigs and dropping them in their trail and threatened to tomahawk her unless she stopped. However, from time to time, she continued to tear off strips of her dress, leaving a trail for the settlers she knew would be searching for them. 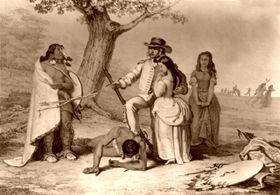 Upon hearing of the capture, Boone and seven men from the fort, started upon the trail of the Indians and kept up the pursuit until, early on the second morning, they discovered them sitting around a fire cooking breakfast. Suddenly they fired upon them, killing two of the Indians and frightening the others enough that they fled, leaving the girls uninjured.

Early in 1778, Boone and 29 other men were captured and carried off by a party of Indian warriors. At that time the Indians in the area were fighting on the English side in the American Revolution, and as they received a ransom for any Americans they might hand over to the English. They soon took Boone and the other men of his party to Detroit. Although the English offered $500 for Boone’s ransom the Indians refused to let him go. They admired him so much that they took him to their home, and with due ceremony adopted him into their tribe. Having plucked out all his hair except a tuft on the top of his head, they dressed this with feathers and ribbons as a scalp-lock. Next they threw him into the river and gave his body a thorough scrubbing in order to wash out all the white blood. Then, daubing his face with paint in true Indian fashion, they looked upon him with huge satisfaction as one of themselves.

Boone remained with them several months, making the best of the life he had to lead. But, when he heard that the Indians were planning an attack upon Boonesborough, he determined to escape warn his friends. His own words tell the story in a simple way: “On the 16th of June, before sunrise, I departed in the most secret manner, and arrived at Boonesborough on the 20th after a journey of 160 miles, during which I had but one meal.” He could not get any food because he dared not use his gun, nor would he build a fire for fear of discovery. He reached the fort in safety, where he was of great service in beating off the attacking party.

This was only one of the many hairbreadth escapes of the fearless backwoodsman. Once while in a shed looking after some tobacco, four Indians with loaded guns appeared at the door and said: “Now, Boone, we got you. You no get away any more. You no cheat us any more.”

In the meantime, Boone had gathered up in his arms a number of dry tobacco leaves and with the dust of these suddenly filled the Indians’ eyes and nostrils. Then while they were coughing, sneezing, and rubbing their eyes, he made good his escape.

After getting caught up in legal land battles in Kentucky and suffering financially, Boone moved out of the United States to Missouri in 1799, which was then part of Spanish Louisiana. The Spanish were eager to promote settlement in the sparsely populated region and Boone, looking to make a fresh start, emigrated with much of his extended family to what is now St. Charles County. The Spanish governor appointed Boone “syndic” (judge and jury) and commandant of the Femme Osage District, positions he held until 1804 when Missouri became part of the United States following the Louisiana Purchase. 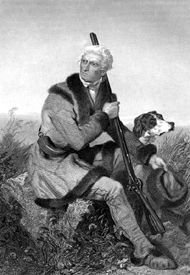 Because Boone’s land grants from the Spanish government had been largely based on verbal agreements, he lost his land claims. In 1809, he petitioned Congress to restore his Spanish land claims, which was finally done in 1814. He then sold most of this land to repay old Kentucky debts.

He spent his final years in Missouri, often in the company of children and grandchildren. He also continued to hunt and trap as often as his failing health allowed.  He died on September 26, 1820, at his son, Nathan Boone’s home on Femme Osage Creek. His last words were, “I’m going now. My time has come.”

He was buried next to Rebecca, who had died on March 18, 1813. The graves, which were unmarked until the mid-1830s, were near Jemima (Boone) Callaway’s home on Tuque Creek, about two miles from the present-day Marthasville, Missouri. In 1845, the Boone’s remains were supposedly disinterred and reburied in a new cemetery in Frankfort, Kentucky, but, it was contested that the wrong remains were exhumed. Today, both the Frankfort Cemetery in Kentucky and the Old Bryan Farm graveyard in Missouri claim to have Boone’s remains.

Coloring History by Legends of America

About the Author & Notes: The vast majority of the above text was written by Wilbur F. Gordy and published in his book American Leaders and Heroes, in 1903. However, the text as it appears here is far from verbatim as it has been heavily edited, removing some parts of the tale and adding additional information. A prolific writer, Gordy published a number of books in the early 20th century including American Leaders and Heroes, Stories of Early American History, Stories of Later American History, American Beginnings in Europe, and many others.