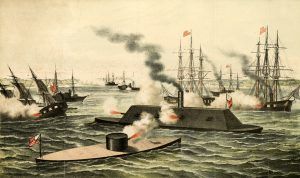 Of course, the South had some sea-power of her own. Nine-tenths of the United States Navy stood by the Union. But, with the remaining tenth and some foreign help, the South managed to contrive the makeshift parts of what might have become a navy if the North had only let it grow. The North, however, did not let it grow.

The regular navy of the United States, though very small to start with, was always strong enough to keep the command of the sea and to prevent the makeshift Southern parts of a navy from ever becoming a whole. Privateers took out letters of marque to prey on Northern shipping. But privateering soon withered off, because prizes could not be run through the blockade in sufficient numbers to make it pay; and no prize would be recognized except in a Southern port. Raiders did better and for a much longer time. The Shenandoah was burning Northern whalers in the Bering Sea at the end of the war. The Sumter and the Florida cut a wide swath under instructions which “left much to discretion and more to the torch.” The famous Alabama only succumbed to the U.S.S. Kearsarge after sinking the Hatteras man-of-war and raiding seventy other vessels. Yet still the South, in spite of her ironclads, raiders, and rams, in spite of her river craft, of the home ships or foreigners that ran the blockade, and of all her other efforts, was a landsman’s country that could make no real headway against the native seapower of the North. 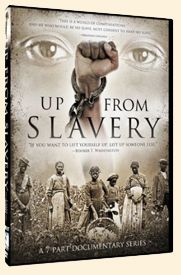 Up From Slavery DVD

Perhaps the worst of all the disabilities under which the abortive Southern navy suffered was lubberly administration and gross civilian interference. The Administration actually refused to buy the beginnings of a ready-made sea-going fleet when it had the offer of ten British East Indiamen specially built for rapid conversion into men-of-war. Forty thousand bales of cotton would have bought the lot. The Mississippi record was even worse. Five conflicting authorities divided the undefined and overlapping responsibilities between them: the Confederate Government, the State governments, the army, the navy, and the Mississippi skippers. A typical result may be seen in the fate of the fourteen “rams” which were absurdly mishandled by fourteen independent civilian skippers with two civilian commodores. This “River Defense Fleet” was “backed by the whole Missouri delegation” at Richmond, and blessed by the Confederate Secretary of War, Judah P. Benjamin, that very clever lawyer-politician and ever-smiling Jew. Six of the fourteen “rams” were lost, with sheer futility, at New Orleans in April, ’62; the rest at Memphis the following June.

As a matter of fact, the Confederate navy never had but one real man-of-war, the famous Merrimac; and she was a mere razee, cut down for a special purpose, and too feebly engined to keep the sea. Even the equally famous Alabama was only a raider, never meant for action with a fleet.

Over three hundred officers left the United States Navy for the South; but, as in the case of the Army, they were followed by very few men. The total personnel of the regular Confederate navy never exceeded four thousand at any one time. 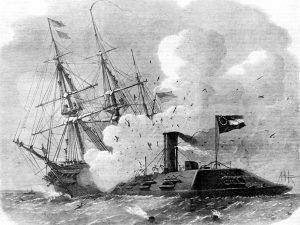 The irregular forces afloat often did gallant, and sometimes even skillful, service in little-isolated ways. But when massed together they were always at sixes and sevens, and they could never do more than make the best of a very bad business indeed. The Secretary of the Confederate navy, Stephen R. Mallory, was not to blame. He was one of the very few civilians who understood and tried to follow any naval principles at all. He had done good work as chairman of the Naval Committee in the Senate before the war and had learned a good deal more than his Northern rival, Gideon Welles. He often saw what should have been done. But men and means were lacking.

Men and means were also lacking in the naval North at the time the war began. But the small regular navy was invincible against next to none, and it enjoyed many means of expansion denied to the South.

On the outbreak of hostilities, the United States Navy had ninety ships and about nine thousand men–all ranks and ratings (with marines) included. The age of steam had come. But fifty vessels had no steam at all. Of the rest one was on the Lakes, five were quite unserviceable, and thirty-four were scattered about the world without the slightest thought of how to mobilize a fleet at home. The age of ironclads had begun already overseas. But in his report to Congress on July 4, 1861, Gideon Welles, Secretary of the Navy, only made some wholly non-committal observations in ponderous “officialese.” In August he appointed a committee that began its report in September with the sage remark that “Opinions differ amongst naval and scientific men as to the policy of adopting the iron armament for ships-of-war.” In December Welles transmitted this report to Congress with the still sager remark that “The subject of iron armature for ships is one of great general interest, not only to the navy and country but is engaging the attention of the civilized world.” Such was the higher administrative preparation for the ironclad battle of the following year.

It was the same in everything. The people had taken no interest in the navy and Congress had faithfully represented them by denying the service all chance of preparing for war till after war had broken out. Then there was the usual hurry and horrible waste. Fortunately for all concerned, Gideon Welles, after vainly groping about the administrative maze for the first five months, called Gustavus V. Fox to his assistance. Fox had been a naval officer of exceptional promise, who had left the service to go into business, who had a natural turn for administration, and who now made an almost ideal Assistant Secretary of the Navy. He was, indeed, far more than this; for, in most essentials, he acted throughout the war as a regular Chief of Staff.

One of the greatest troubles was the glut of senior officers who were too old and the alarming dearth of juniors fit for immediate work afloat. It was only after the disaster at Bull Run that Congress authorized the formation of a Promotion Board to see what could be done to clear the active list and make it really a list of officers fit for active service. Up to this time, there had been no system of retiring men for inefficiency or age. An officer who did not retire of his own accord simply went on rising automatically till he died. The president of this board had himself turned sixty. But he was the thoroughly efficient David Glasgow Farragut, a man who was to do greater things afloat than even Fox could do ashore. How badly active officers were wanted may be inferred from the fact that before the appointment of Farragut’s promotion board the total number of regular officers remaining in the navy was only 1457. Intensive training was tried at the Naval Academy.

Yet 7500 volunteer officers had to be used before the war was over. These came mostly from the merchant service and were generally brave, capable, first-rate men. But a nautical is not the same as a naval training, and the dearth of good professional naval officers was felt to the end. The number of enlisted seamen authorized by Congress rose from 7600 to 51,500. But the very greatest difficulty was found in “keeping up to strength,” even with the most lavish use of bounties.

Bearing this in mind, and remembering the many other Northern odds, one might easily imagine that the Southern armies fought only with the courage of despair. Yet such was not the case. This was no ordinary war, to be ended by a treaty in which compromise would play its part. There could be only two alternatives: either the South would win her independence or the North would have to beat her into complete submission. Under the circumstances, the united South would win whenever the divided North thought that complete subjugation would cost more than it was worth. The great aim of the South was, therefore, not to conquer the North but simply to sicken the North of trying to conquer her. “Let us alone and we’ll let you alone” was her insinuating argument; and this, as she knew very well, was echoed by many people in the North. Thus, as regards her own objective, she began with hopes that the Northern peace party never quite let die.