Though sorely hampered, the Union Government did, on the whole, succeed in turning the vast and varied resources of the North against the much smaller and less varied resources of the South. The North held the machinery of the national government, though with the loss of a good quarter of the engineers. In agriculture of, all kinds both North and South were very strong for purposes of peace. Each had food in superabundance. But the trading strength of the South lay in cotton and tobacco, neither of which could be turned into money without going north or to sea. In finance, the North was overwhelmingly strong by comparison, more especially because Northern sea-power shut off the South from all its foreign markets. In manufactures, the South could not compare at all.

The army moving around the circumference is said to be operating on exterior lines, while the army moving from point to point of the circumference by the straighter, and therefore shorter, lines inside is said to be operating on interior lines. In more homely language the straight road beats the crooked one. In plain slang, it’s best to have the inside track.

Of course, there is a reverse to all this. If the roads, rails, and waterways are better around the circle than inside it, then the odds may be turned the other way; and this happens most often when the forces on the exterior lines are the better provided with sea-power.

Again, if the exterior forces are so much stronger than the interior forces that these latter dare not leave any strategic point open in case the enemy breaks through, then it is evident that the interior forces will suffer all the disadvantages of being surrounded, divided, worn out, and defeated. 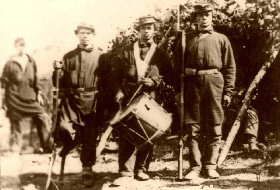 Northern factories alone could not supply the armies. But finance and factories together could. The Southern soldier looked to the battlefield and the raiding of a base for supplying many of his most pressing needs in arms, equipment, clothing, and even food– for Southern transport suffered from many disabilities. Fierce wolfish cries would mingle with the rebel yell in battle when the two sides closed. “You’ve got to leave your rations!”–“Come out of them clothes!”–“Take off them boots, Yank!”–“Come on, blue bellies, we want them blankets!”

It was the same in almost every kind of goods. The South made next to none for herself and had to import from the North or overseas. The North could buy silk for balloons. The South could not. The Southern women gave in their whole supply of silk for the big balloon that was lost during the Seven Days’ Battle in the second year of the war. The Southern soldiers never forgave what they considered the ungallant trick of the Northerners who took this many-hued balloon from a steamer stranded on a bar at low tide down near the mouth of the James. Thus fell the last silk dress, a queer tribute to Northern seapower! Northern seapower also cut off nearly everything the sick and wounded needed; which raised the death rate of the Southern forces far beyond the corresponding death rate in the North. Again, preserved rations were almost unknown in the South. But they were plentiful throughout the Northern armies: far too plentiful, indeed, for the taste of the men, who got “fed up” on the desiccated vegetables and concentrated milk which they rechristened “desecrated vegetables” and “consecrated milk.” 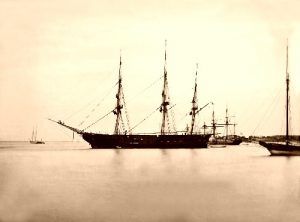 There is the same tale to tell about transport and munitions. Outside the Tredegar Iron Works at Richmond, the only places where Southern cannon could be made were Charlotte in North Carolina, Atlanta and Macon in Georgia, and Selma in Alabama. The North had many places, each with a superior plant, besides which the oversea munition world was far more at the service of the open-ported North than of the close-blockaded South. What sea-power meant in this respect may be estimated from the fact that out of the more than three-quarters of a million rifles bought by the North in the first fourteen months of the war all but a beggarly thirty thousand came from overseas.

Transport was done by road, rail, sea, and inland waters. Other things being equal, a hundred tons could be moved by water as easily as ten by rail or one by road. Now, the North not only enjoyed enormous advantages in sea-power, both mercantile and naval, but in road, rail, canal, and river transport too.

The road transport that affected both sides most was chiefly in the South because most maneuverings took place there. “Have you been through Virginia?–Yes, in several places” is a witticism that might be applied to many another State where muddy sloughs abounded. In horses, mules, and vehicles the richer North wore out the poorer and blockaded South. Both sides sent troops, munitions, and supplies by rail whenever they could; and here, as a glance at the map will show, the North greatly surpassed the South in mileage, strategic disposition, and every other way.

The South had only one through-line from the Atlantic to the  Mississippi, and this ran across that Northern salient which threatened the South from the southwestern Alleghenies. The other rails all had the strategic defect of not being convenient for rapid concentration by land; for most of the Southern rails were laid with a view to getting surplus cotton and tobacco overseas. The strategic gap at Petersburg was due to a very different cause; for there, in order to keep its local transfers, the town refused to let the most important Virginian lines connect.

Taking sea-power in its fullest sense, to include all naval and mercantile parts on both salt and freshwater, we can quite understand how it helped the nautical North to get the stranglehold on the landsman’s South. The great bulk of the whole external trade of the South was done by shipping. But, though the South was strong in exportable goods, it was very weak in ships. It owned comparatively few of the vessels that carried its rice, cotton, and tobacco crops to market and brought back made goods in return. Yankees, Britishers, and Bluenoses (as Nova Scotian craft were called) did most of the overseas transportation.

Moreover, the North was vastly stronger than the South on all the inland waters that were not “Secesh” from end to end. The map shows how Northern sea-power could not only divide the South in two but almost enisled the eastern part as well. 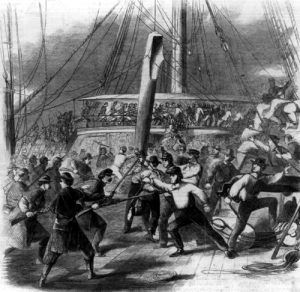 A battle at sea

Holding the Mississippi would affect the division, while holding the Ohio would make the eastern part a peninsula, with the upper end of the isthmus safe in Northern hands between Pittsburgh, the great coal and iron inland port, and  Philadelphia, the great seaport, less than three hundred miles away. The same isthmus narrows to less than two hundred miles between Pittsburgh and Harrisburg (on the Susquehanna River), and its whole line is almost equally safe in Northern hands. A little farther south, along the disputed borderlands, it narrows to less than one hundred miles, from Pittsburgh to Cumberland (on the Potomac canal). Even this is not the narrowest part of the isthmus, which is less than seventy miles across from Cumberland to Brownsville (on the Monongahela) and less than fifty from Cumberland to the Ohiopyle Falls (on the Youghiogheny). These last distances are measured between places that are only fit for minor navigation. But even small craft had an enormous advantage over road and rail together when bulky stores were moved. So Northern sea-power could make its controlling influence felt in one continuous line all around the eastern South, except for 50 miles where small craft were concerned and for two hundred miles in the case of larger vessels. These two hundred miles of land were those between the Ohio River port of Wheeling and the Navy Yard at Washington.

Nor was this virtual enlistment the only advantage to be won. For while the strong right arm of Union sea-power, facing northward from the Gulf, could hold the coast, and its sinewy left could hold the Mississippi, the supple left fingers could feel their way along the tributary streams until the clutching hand had got its grip on the whole of the Ohio, Cumberland, Tennessee, Missouri, Arkansas, and Red Rivers. This meant that the North would not only enjoy the vast advantages of transport by water over transport by land but that it would cause the best lines of invasion to be opened up as well.