With the colonies thus cut in two, the British thought they would find little difficulty in putting down first one and then the other group of rebels. As to Plan 1, Burgoyne came up Lake Champlain in June 1777 and captured Fort Ticonderoga. It is said that when the news of this victory was brought to the king he clapped his hands and exclaimed, “I have beaten them. I have beaten all the Americans!”

However, Burgoyne, in passing from Lake Champlain to the Hudson River, found his way blocked by fallen trees and ruined bridges. If the patriots were not strong enough to meet him in battle, they were at least clever enough to hinder his advance. Burgoyne had to leave behind him many soldiers to safeguard the transportation of his supplies, which came from Canada, making his progress slow. He knew that the Americans had stores at Bennington, Vermont, so he then sent about a thousand Hessians to secure them. The invaders were met by Colonel John Stark with a body of militia, and so successfully did the Americans fight that only about seventy of the Hessians got back to the British camp. This was a hard blow to Burgoyne.

Working on Plan 2, Colonel Barrimore St. Leger gathered a number of British soldiers and Six-Nation Indians about him and proceeded to the Mohawk Walley as planned. His first move was to besiege Fort Stanwix, which was held by 600 Continental soldiers. When St. Leger learned that an army of 800 patriots was on its way to re-enforce the garrison at the fort, the Colonel sent a detachment of troops to meet it. At Oriskany, New York, the Americans were caught in a ravine and one of the bloodiest battles of the American Revolution was fought. The gallant American commander, General Nicholas Herkimer, was severely wounded, but, seated at the foot of a tree, he continued to shout his cheering orders to his men. The Americans held the field, and the British retreated.

It was in this campaign that the American flag of stars and stripes was hoisted for the first time. While holding Fort Stanwix, New York the Continentals made a dispatched a regiment that captured five British flags. These they hoisted, upside down, over their fort. Then above them, they raised their own flag, which the men had hastily put together.

In June 1777, Congress decided upon a national flag. It was to be of alternate red and white stripes, thirteen of them, with a blue field containing white stars in a circle. Red was the emblem of strength, blue of unity, and white of purity. Mrs. Betsy Ross had, some weeks earlier made the first flag of this design. But, she would have found little resemblance to her beautiful handiwork in the first Red, White, and Blue raised over Fort Stanwix on August 6th. One man gave his white shirt, another his blue coat, and a third, strips of his wife’s red flannel petticoat. It was a curious makeshift, but the three colors went up with a lusty hurrah from the throats of the proud Americans. St. Leger continued to besiege the fort, but help for the defenders was near at hand.

Benedict Arnold was approaching with a strong force of patriots. When the two armies were about twenty miles apart, Arnold played a clever trick upon the enemy. Through a captured British soldiers and a friendly Oneida Indian, he spread abroad exaggerated stories of the size and strength of the American army that was coming. The Indians were frightened and fled. In a very short while, St. Leger, with what was left of his army, pushed back to Oswego and embarked. This left Burgoyne with no one to depend upon but General William Howe.

In the meantime, General William Howe was instigating the third plan in New York.  Here, he was in daily conference with a man whose name makes a dark blot on the pages of our nation’s history, General Charles Lee. It was he who had refused to obey Washington. Now, taken prisoner by the British, he turned traitor. Forgetting the loyalty due to his country, he laid before General Howe, the plans of the American army. He assured Howe that General Washington had sent so many soldiers into New York that his forces were greatly weakened. Since General Howe had not yet received direct orders to join Burgoyne, this seemed his chance to capture Philadelphia. He first tried to draw the Americans away from their strong position at Morristown but found that Washington was not thus to be caught.

Then General Howe started over again, this time sailing southward to Chesapeake Bay, with the hope of reaching Philadelphia in that way. Soon after passing Brandywine, Pennsylvania, he landed and General Washington met him at and Brandywine Creek. Here, owing to the Germantown superior strength of the British army — 18,000 against 11,000 — the Americans were defeated. But, General George Washington so hindered General Howe in his march to Philadelphia that it took him two whole weeks to make the 26 miles. Again, in October, Washington’s forces attacked Howe and his troops, just outside of Philadelphia, at Germantown. Again, Washington was defeated, and people began to wonder what he was doing. They could not understand why he was continually putting his army in a position to be beaten. But, this was not carelessness on the part of the great general. It was a well-laid plan to keep General Howe so busy that he could not spare a single man to be sent to General Burgoyne in New York. 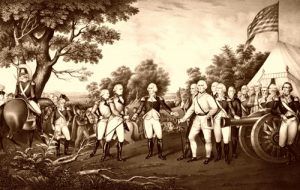 And, indeed, Burgoyne’s need was very great. The American forces under General Horatio Gates were pressing him hard. Expecting General William Howe to join him, he crossed the Hudson River and stationed his men just below Saratoga, New York. At this move, a detachment of Americans pushed northward and cut him off from Fort Ticonderoga, his supply headquarters. Now, he was fairly trapped and there was nothing to do but fight. Two battles were waged — in the first, the British were driven back. In the second the second battle, they were defeated beyond question. On October 17, 1777, General John Burgoyne surrendered his whole army. Thus, by forcing St. Leger to retreat and capturing Burgoyne, the Americans completely defeated England in the first of her two great plans for subduing the rebels.

In Europe, the capture of Burgoyne’s army produced a tremendous stir. The French rejoiced, quickly recognized the United States as an independent nation, and promised her aid.

Though many more battles would be fought before the Revolutionary War would come to an end, the recognition of the United States as a nation was a turning point in the struggle.

About the Article: This article on the American Revolution was, for the most part, written by Arthur Cecil Perry and Gertrude A. Price and included in a chapter of their book “American History,” published in 1914.  However, the original content has been heavily edited and additional information added.