The women were thus left alone to face their human foes and the thousand other perils which beset them. They were, to all intents and purposes, soldiers. They belonged to the home army, upon which the frontier would have mainly to rely for security. Ceaseless vigilance by night and day and a steady courage in the presence of danger had to be constantly exercised.

Sometimes the savage foe came in overwhelming numbers, and in such cases, the only safety lay in flight, during which all woman’s address and fortitude were called into requisition, either to devise means of successfully eluding her pursuers or to endure the toils and hardships of a rapid march. Sometimes she stood with a loaded gun in her household garrison, and faced the enemy, either repelling them, or dying at her post, or, what was worse than death, seeing her loved ones butchered before her eyes, and their being led into cruel captivity.

On the Texas border, in 1862, one of these home-warriors, during the absence of her husband in the Southern army, was left alone not far from the Rio Grande, and ten miles from the house of any American settler. Three Mexican horse thieves came to the house and demanded the key of the stable, in which two valuable horses were kept, threatening, in case of refusal, to burn her house over her head. She stood at her open door, with a loaded revolver, and told them that not only would she not surrender the property, but that the first one that dared to lay violent hands upon her should be shot down. Cowed by her intrepid manner, the bandits slunk away.

On another occasion, she was attacked by two American outlaws, while riding on the river bank. One of them seized the bridle of the horse, and the other attempted to drag her from the saddle. Turning upon the latter, she shot him dead, and the other, from sheer amazement at her daring, lost his self-possession and begged for mercy. After compelling him to give up his arms, she allowed him to depart unmolested, as there was no tribunal of justice nearby where he could be punished for his villainy. These exploits gained for the borderer’s wife a wide reputation throughout the region, and either through fear of her courage or through admiring respect for such heroism, when displayed by a lone woman, she was never again troubled by marauders. 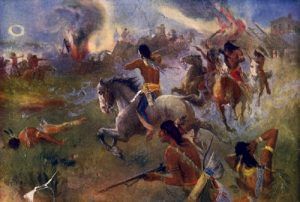 The Sioux war in Minnesota, in 1862, was remarkable for the sufferings endured and the bravery displayed by women whose husbands had left them to join the army.

A notable instance of this description was that of two married sisters who lived in one house on the Minnesota River, some eighty miles above Mankato. One morning in the spring of that year their house was surrounded by Sioux Indians but was so bravely defended that the savages withdrew without doing much damage. Two weeks of perfect peace passed away, and the two sisters renewed their outdoor work as fearlessly as ever, as their secluded situation prevented them from hearing of the ravages of the Indians in the eastern settlements.

Late one afternoon, while both the women were sitting in a small grove, not far from the house, they heard the war-whoop, and, stealing through the bushes, saw ten savages, who had dragged the three children from the house and cut their throats, and, after scalping them, were dancing about their mangled corpses. They then set fire to the house and barns, and, butchering the cow, proceeded to prepare a great feast.

Not knowing how long the Indians would remain, and having no food nor means to procure any, the hapless women set out for the nearest house, which was situated ten miles to the east. They succeeded in reaching the spot at ten o’clock that night but found nothing but a heap of ashes and two mangled bodies of a woman and her child.

Grief, fear, and fatigue kept them from obtaining that rest they so much needed, and before daylight, they resumed their march towards the next house, eight miles farther east. This had also been destroyed. The younger sister, who was the mother of the three children who had been butchered, now gave up in grief and despair and declared that she would die there. But she was at length induced to proceed by the urgent persuasions of the older and stronger woman.

The borders of the river at this point were covered with woods rendered impervious to the rays of the sun by the herbs, and shrubs that crept up the trunks, and twined around the branches of the trees. They resumed their melancholy journey; but observing that following the course of the river considerably lengthened their route, they entered into the wood, and in a few days lost their way. Though now nearly famished, oppressed with thirst, and their feet sorely wounded with briars and thorns, they continued to push forward through immeasurable wilds and gloomy forests, drawing refreshment from the berries and wild fruits they were able to collect. At length, exhausted by hunger and fatigue, their strength failed them, and they sunk down helpless and forlorn. Here they waited impatiently for death to relieve them from their misery. In four days the younger sister expired, and the elder continued stretched beside her sister’s corpse for forty-eight hours, deprived of the use of all her faculties. At last, Providence gave her strength and courage to quit the melancholy scene, and attempt to pursue her journey. She was now without stockings, barefooted, and almost naked; two cloaks, which had been torn to rags by the briars, afforded her but a scanty covering. Having cut off the soles of her sister’s shoes, she fastened them to her feet and went on her lonely way. The second day of her journey she found water, and the day following, some wild fruit and green eggs; but so much was her throat contracted by the privation of nutriment, that she could hardly swallow such a sufficiency of the sustenance which chance presented to her as would support her emaciated frame.

That evening she was found by a party of volunteers who had been in pursuit of the Indians, and she was brought into the nearest settlement in a condition of body and mind to which even death would have been preferable.

Notwithstanding the dangers and distractions of this quasi-military life led by wives and mothers on the frontier, they did not neglect their other home duties.

When the scarred and swarthy veterans returned to their homes on the border there were no marks of neglect to be erased, no evidence of dilapidation and decay. “They found their farms in as good a condition as when they enlisted. Enhanced prices had balanced diminished production. Crops had been planted, tended, and gathered, by hands that before had been all unused to the hoe and the rake. The sadness lasted only in those households–alas! too numerous–where no disbanding of armies could restore the soldier to the loving arms and the blessed industries of home.”

These women of the frontier during the late war may be called the irregular forces of the soldiers in all respects except in being enrolled and placed under officers. They fought and marched, stood on guard and were taken prisoners. They viewed the horrors of war and were under fire although they did not wear the army uniform nor walk in files and platoons. All these things they did in addition to their work as housewives, farmers, and mothers.

Many others took naturally to the rough life of a soldier, and enlisting under soldiers’ guise followed the drum on foot or in the saddle, and encamped on the bare ground with a knapsack for a pillow and no covering from the cold and rain but a brown army blanket.

One of these heroines was Miss Louisa Wellman of Iowa. Born and nurtured on the border, habituated from childhood to an outdoor life, a fine rider, as well as a good shot with both a rifle and a pistol, it was quite natural that she should have felt a martial ardor when the war commenced, and having donned her brother’s clothes, should have enlisted as she did in one of the Iowa regiments. Her most serious annoyance was the rough language and profanity of the soldiers. While in camp she managed to associate with the sober and pious soldiers, of whom there were several in the company. This was afterward known as “the praying squad;” but she did not in consequence of her reluctance to associate with the others lose her popularity, owing to her unvarying cheerfulness, her generosity, and her disposition to oblige often at the greatest inconvenience to herself. If a comrade was taken sick she was the first to tender her services as watcher and nurse, and in this way came to be known as “Doctor Ned.”