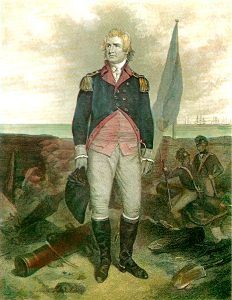 February 14, 1779 – At Kettle Creek, Georgia, Andrew Pickens and Elijah Clarke and their Georgia and Carolina militia defeated North Carolina Loyalist militia who were traveling to Augusta to join the British forces.

May 11-13, 1779 – In Charleston, South Carolina Major General Augustine Prevost had to break his siege as American forces under Major General Benjamin Lincoln approached. 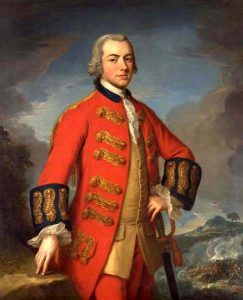 June 16, 1779 – Spain declares war on England, but does not make an alliance with the American Revolutionary forces.

July 10, 1779 – Naval ships from Massachusetts are destroyed by the British while attempting to take the Loyalist stronghold of Castine, Maine.

July-August 1779 – American attempt to dislodge British along the Penobscot River in Maine failed.

August 14, 1779 – A peace plan is approved by Congress which stipulates independence, complete British evacuation of America and free navigation on the Mississippi River.

August 28, 1779 – After two terrible massacres, American forces moved into the Indian territory of New York and burned villages. Iroquois and Seneca power was diminished although they remained hostile. 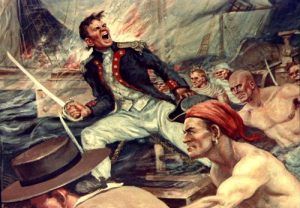 “I have not yet begun to fight!” – John Paul Jones, painting by  Charles J. Andres.

September 23, 1779 – Off the coast of England, John Paul Jones fights a desperate battle with a British frigate. When the British demand his surrender, Jones responds, “I have not yet begun to fight!” Jones then captures the frigate before his own ship sinks.

September 27, 1779 – John Adams is appointed by Congress to negotiate peace with England.

Winter 1779-1780 – Morristown, New Jersey sheltered the main encampments of the American Continental Army and served as the winter quarters of its commander-in-chief, General George Washington. 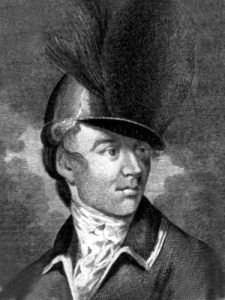 May 6, 1780 – The British capture Fort Moultrie at Charleston, South Carolina.

May 12, 1780 – The worst American defeat of the Revolutionary War occurs as the British capture Charleston, South Carolina and the entire southern American Army along with four ships and a military arsenal. British losses are only 225.

May 25, 1780 – After a severe winter, General George Washington faces a serious threat of mutiny at his winter camp in Morristown, New Jersey. Two Continental regiments conduct an armed march through the camp and demand immediate payment of salary, which is overdue by five months, and full rations. Troops from Pennsylvania put down the rebellion and two of the leaders of the protest were hanged.

June 5, 1780 – Lord Charles Cornwallis assumes command of the British Army in the South.

June 11, 1780 – A new Massachusetts constitution is endorsed asserting “all men are born free and equal,” which includes black slaves.

July 11, 1780 – Six Thousand French soldiers under Count de Rochambeau arrive at Newport, Rhode Island. They will remain there for nearly a year, blockaded by the British fleet.

June 13, 1780 – General Horatio Gates is commissioned by Congress to command the Southern Army.

June 23, 1780 – American forces defeat the British in the Battle of Springfield, New Jersey.