The Tattoo Man of Route 66, by The Road Crew

“A lot of guys have tattoos of devils and skulls and some things satanic but that just wasn’t me.”

Ron Jones lives in Bartlesville, Oklahoma about 50 miles west of Vinita, via Highway 60. Ron is a car enthusiast driving a patriotic 1956 Chevy decked out in shining red, white, and blue that he has owned for over 30 years. Mr. Jones and his classic car once made a trip all the way to Los Angeles, California for a one-day car show. In addition, he and his car have often traveled to Laughlin, Nevada and Monroe, Louisiana. He says: “I’m not afraid to go anywhere at the drop of a hat if I can.” 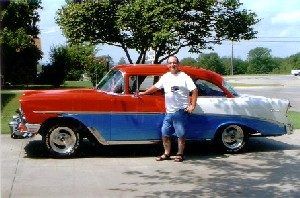 Back in the mid-1990s, Ron and his prized 210 two-door sedan went to a car show in Tulsa, Oklahoma. There, amongst the classic cars, was what? None other than a Route 66 exhibit with all manner of Mother Road memorabilia, and that was the hook that “drove” Ron to his current obsession.

Ron and his customized Chevy, complete with sunroof and a log chain steering wheel, began to travel the Mother Road. But that wasn’t enough for Ron. He wanted even more of dear old “Mother.” At the age of 51, he got his first tattoo. Of what? You guessed it – ole’ Route 66!  The tattoo was of the 66 shield and a piece of the highway.

Four years later, in 2004, he had 23 of them running up and down his legs! Having at least two from each state, including one of the long-lost Coral Court in St. Louis, Missouri.

When I asked Ron in 2004 if he has a favorite tattoo, he said: “I really don’t have a favorite because they all mean something different.” However, he really likes the Snow Cap Drive-Inn in Seligman, Arizona. Of the Snow Cap, Ron said: “The owner, Juan Delgadillo, was a real treasure of Route 66.”

He also likes the one of the 66 Drive-In in Carthage, Missouri, because it displays the back end of his car; and he likes the Cozy Dog in Springfield, Illinois, because the owner is a friend of his.

When Ron’s not going through the excruciating pain of needle poking or cruisin’ the highway in his classic car, he also carries his obsession inside the garage, where again you’ll see all types of Route 66 and car memorabilia. Yes, Ron does also have to work — sellin’ and deliverin’ a few welding supplies in Oklahoma.

I asked Ron if he has an addiction to tattoos and he said “they’re kind of like potato chips — you can’t eat just one.” He’s gotta be runnin’ out of room with 23 tattoos on his legs (as of 2005). Ron agrees, saying that he will, no doubt, have to start getting them on his arms soon.

So, what do people think of Ron’s obsession? Well, according to Jones, some people don’t like them, but there are others who say “nice tats.” Well, that’s just folks — all entitled to their opinions. I, for one, think their much more preferable than skulls, cross-bones or tears.

By 2014, Ron had over 100 tattoos and was featured on an episode of the History Channel’s “Counting Cars.”  Congrats Ron and thanks for keeping the Mother Road fun!

Ron loves to talk about his tattoos and his passion for the Mother Road. And we loved listening to him. Keep kickin’ the asphalt Ron!!

Just a sample of some of Ron’s Tattoos 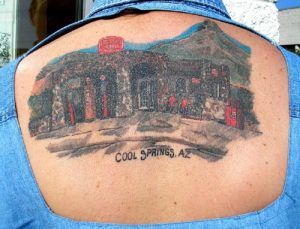 In September 2005 Ron expanded from his legs with a tattoo of Cool Springs, Arizona on his back by Kathy Weiser-Alexander. 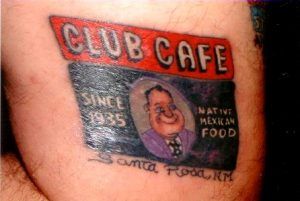 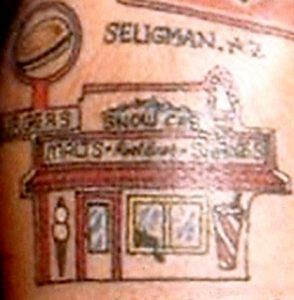 The Snow Cap Drive-In in Seligman, Arizona is one of Ron’s favorite tattoos. 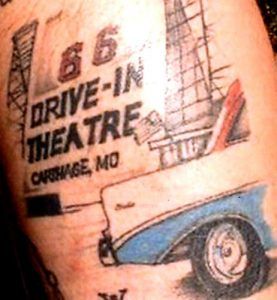 Ron’s 66 Drive-In tattoo is one of his favorites because it shows the back of his car. 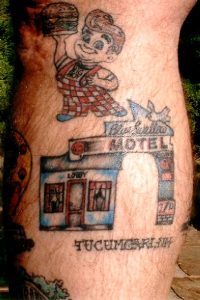 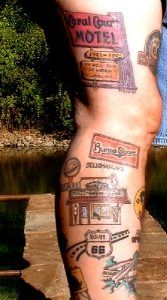 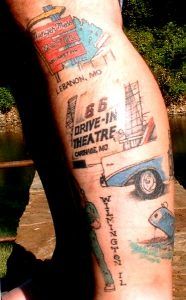 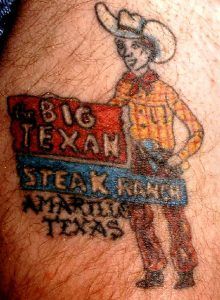 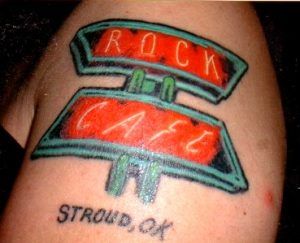 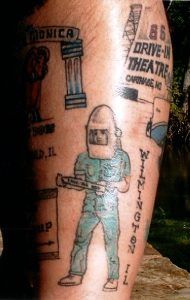 66 Recipes – Flavors of the Mother Road