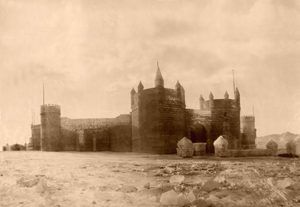 The Ice Palace was built in just 36 days utilizing 5,000 tons of ice. The palace held a skating rink, a restaurant, a ballroom, a dance floor, gaming rooms, and a carousel house.

In 1896 a spectacular authentic Norman ice palace stood on a gleaming, snow-covered rise above the City of Leadville, Colorado. Sitting at the foot of two of Colorado’s highest peaks, the ice castle was the most extensive ice structure ever built. The crystal castle housed a ballroom, a 180-foot skating rink, a curling rink, a restaurant, a dance floor, gaming rooms, a theatre, toboggan runs, and a carousel house.

Leadville was born from the fabulous gold strikes in 1860, and for two decades, the town thrived with fortunes made from the rich ore of the surrounding mines. But in 1881, some of the largest, wealthiest mines began to play out after years of exploitation. The miners began to leave, searching for richer finds, stores and banks failed, and the town was consumed by fires that destroyed the rows of wooden structures. Repeal of the Sherman Silver Purchase Act and the depression of 1893 further depressed the economy of Leadville and ended the silver era.

In 1893, the Herald Democrat, reviewing the events of the year, expressed: “Those were the days of panic and gloom for Leadville. Ruin and bankruptcy stared every mining man, every smelting man, and every businessman in the face.” 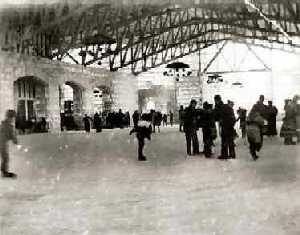 Before the winter of 1895, the desperate townspeople proposed a mammoth ice castle to draw sightseers, create jobs, and rescue the town’s flagging economy. Anticipating trains full of tourists, the project began by hiring Charles E. Jay, an architect who had designed an ice palace in St. Paul, Minnesota. Tingley S. Wood was hired to build the ice palace, and the Leadville Ice Company got the contract to produce the ice.

Construction began November 1, 1895, with a crew of 250 men working day and night. Day laborers were paid $2.50 per day, and skilled laborers were paid $3.00 per day. The palace was more than 58,000 square feet – 325 x 180 feet, utilizing 180,000 board feet of lumber and 5,000 tons of ice. The palace was supported by a complex framework of trusses, girders, and timber, with the ice for appearance only. The ice was trimmed to size and placed in forms, then sprayed with water, which served as mortar to bind the blocks together. The towers reached 90 feet high by 40 feet wide, and the palace encompassed 5 acres of ground.

Just 36 days later, the Ice Palace, between Seventh and Eighth Streets on top of Capitol Hill, was opened on January 1, 1896. Visitors from far and wide were amazed by the spectacular castle, with its impressive size, electric lights casting a glow through the translucent walls, and American Beauty roses and 18-inch trout frozen in blocks of clear ice decorating the inside walls. Outside, the castle was adorned with gleaming searchlights with prismatic colors, and when visitors arrived at night, they were awe-struck. 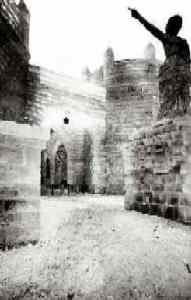 The Ice Palace was a fairyland come true to the children who visited, overwhelmed with the smells of many popcorn machines, the merry-go-round, and the skating rink.

For three months, the Crystal Carnival entertained more than 250,000 visitors until an early thaw in mid-March. The winter of 1895 and 1896 was the grandest Leadville had ever known. The visitors said that when the sun shone through the ice, it looked like 1,000 sparkling lights.

Finally, the Ice Palace began to melt, and the building was condemned on March 28, though skaters continued to skate on the ice rink until June. It remained standing for some time after that, as 5,000 tons of ice takes a while to melt. The ice palace’s last formal event was May Day’s maypole skating party. The ice was in excellent shape, and many ladies and gentlemen spent an evening skating instead of dancing around the maypole.

Despite special trains filled with visitors, the Ice Palace was a financial disaster for its investors, so they abandoned plans to build one each winter.

The Ice Palace stands now only in photographs, paintings, models, and history. 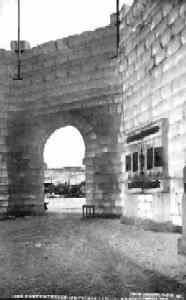 The Ice Palace entertained over 250,000 visitors during it’s three-month life. But, it was a financial disaster for the investors who built it, so another ice palace of its magnitude has never been built again.