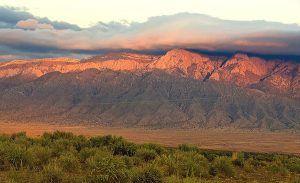 Situated on the Sandia Mountains northwest slope, about 15 miles north of Albuquerque, is Bernalillo, New Mexico. Originally established along the east side of the Rio Grande, the community is located on the historic Camino Real de Tierra Adentro (“Royal Road”) and the pre-1937 alignment of Route 66.

In 1540 Francisco Vasquez de Coronado led an expedition north from Mexico. In September, they reached Tiguex, a group of Puebloan Indians, near the present-day Bernalillo, where Coronado established winter headquarters. Their stay resulted in what is known as the Tiguex War. After killing hundreds of the native people and burning their villages, the Spaniards moved north in the spring of 1841.

In 1598, Juan de Oñate came through the area and established Santa Fe as the capital of “New Spain.” At this time, land grants were given to several families in the Bernalillo area, including the Perea, Bernal, Gonzales, and Chavez families. Soon, others came to the area, and several Spanish ranches and haciendas existed, and the Church of San Francisco was built for use by the area residents. The church included a small chapel in honor of Sandía Pueblo’s patron Saint Anthony. In the 1620s, the wine grape vines were introduced and quickly thrived as families made wine, and vineyards were flourishing. Vineyards still thrive in the region today and have become a staple within the town of Bernalillo.

The Hispanic people lived between the Sandia Pueblo on the south and Santa Ana Pueblo on the north. They got along with the nearby Pueblo peoples and were told in advance of the Pueblo Revolt in 1680. The residents were able to leave the area without being harmed. During the Pueblo Revolt, the Church of San Francisco was burned, but Saint Anthony’s chapel was spared.

All of the revolt survivors fled south to the village of San Lorenzo, which has now been absorbed into El Paso, Texas. Twelve years later, Diego de Vargas set out for Santa Fe in August 1692 to reconquer New Mexico. Before leaving, he made a vow to San Lorenzo residents to commemorate the colonists’ suffering and triumph with solemn dance and public celebrations. Today, the people of Bernalillo still observe the “promesa” to San Lorenzo every August 10 by performing “Los Matachines,” the spiritual dance drama of the conquest. 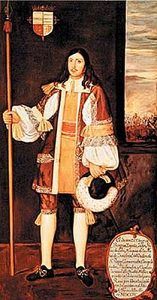 The area was re-settled by De Vargas in the autumn of 1695, and many inhabitants of the earlier land grants returned. By 1698, the village of Bernalillo was established by settlers and a garrison of soldiers.

In 1701 a land grant was made to Felipe Gutierrez, a soldier and re-conqueror of New Mexico for 4.5 miles.  Another grant was made to Jose Perea for three miles in 1824. These would soon make up the town of Bernalillo, which by 1776 would be called home to 81 people. By 1693, the settlement had become the center of trade throughout the region.

By the time the United States acquired New Mexico in 1846, Bernalillo was one of the best-built towns in the region and was prosperous. Phillip St. George Cook, while leading the Mormon Battalion to California, passed through Bernalillo and described it:

“… the prettiest village in the Territory. Its view, as we approached, was refreshing; green meadows, good square houses, and a church, cotton‑woods, vineyards, orchards ‑ these jealously walled in; and there were numbers of small fat horses grazing. The people seemed of superior class, handsomer, and cleaner. But parts of this bottom had sand hillocks, with their peculiar arid growths.” 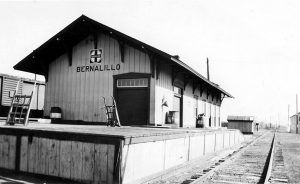 The decade following the Civil War brought an influx of eastern and mid-western farmers and livestock raisers looking for cheap land and others who were attracted to the fertile valley and high grassy mesas. The telegraph first came in 1875, and the Atchison, Topeka, and Santa Fe Railroad came through the area in 1881.

By the time Route 66 came through in 1926, the village had become an important trading center and a shipping point for cattle and lumber. Route 66, however, was short-lived, as it was rerouted in 1937, bypassing the area.

Today, the town, which remains a retail trade and service center for this part of the Rio Grande basin, has about 9,200 people. It celebrates its rich Spanish and Native American history in its culture, traditions, architecture, and events. 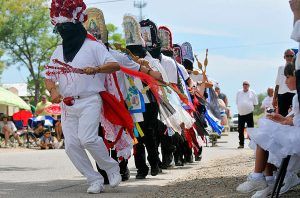 Bernalillo continues to celebrate the centuries-old Las Fiestas de San Lorenzo, held annually on August 9, 10, and 11, with the focus on the ritual dance drama known as Los Matachines. As wine and vineyards continue to be important to the town, the New Mexico Wine Festival at Bernalillo is held each Labor Day Weekend.

The inhabited pueblos of Sandia, Santa Ana, and San Felipe are nearby, and the Kuaua Ruins (Coronado Historic Site), an ancient pueblo, settled in about 1325. Our Lady of Sorrows Church, built in 1857, continues to stand at 301 S Camino Del Pueblo. It was added to the National Register of Historic Places in 1977. 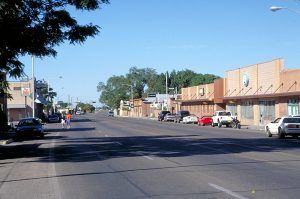